A long, long time ago, in what is now the southern United States, several giant dinosaurs, including a relative of the T. rex, were once on the hunt for prey.

In their shadow, almost 70 million years later, palaeontologists have now shed light upon a much smaller competitor running underfoot. Standing only one metre tall (three feet) and roughly two metres long, this feathered carnivore may have been short, but you wouldn't want to underestimate it.

Initially discovered in New Mexico in 2008, the species has only recently been identified as a dromaeosaurid - a family of dinosaurs more popularly known as 'raptors' - and, judging from the 20 fragmented fossils uncovered, it probably hunted with great speed and the agility of a cheetah, at times tackling prey several times its size.

Now, the fearsome creature has officially been named Dineobellator notohesperus, which means 'Navajo warrior from the Southwest' - and oh, what a fighter it was!

While this small-bodied predator is generally the same size as its relative, the velociraptor (which, contrary to the Jurassic Park films, is about the size of a large dog), the new species appears stronger and more agile.

"Features of the hand and foot claws, namely places for muscle and tendon attachments, show that Dineobellator would have had a relatively stronger grasp and grip ability then other dromaeosaurids," palaeontologist Steven Jasinski told ScienceAlert.

Skeletons of small dinosaurs in the Late Cretaceous are very rare, as these creatures were probably not that common, and their light bones were no match for the wear of time. A find like this is remarkable in more ways than one, and this particular species has several more unique features that set it apart.

On the other end of the body, its stiff tail also stands out. While raptors also have long rigid appendages like this, allowing them to maintain balance while running at high speeds, this particular species appears to have had more mobility at the hips.

"Think of a cheetah hunting and pursuing a gazelle in the savannah today," says Jasinski.

"They are very fast and their tail tends to be stiff and straight. However, when the gazelle changes directions and the cheetah must quickly do the same, the tail is whipped around to act as a counter-balance and rudder to help with that change in direction."

In short, not only was this species fast, but also remarkably agile, which means it could have easily pursued smaller animals that quickly change direction.

Still, that doesn't mean this raptor wasn't thinking big. Jasinski says the strength in its upper body and feet suggests a pack could have taken down prey several times their size. 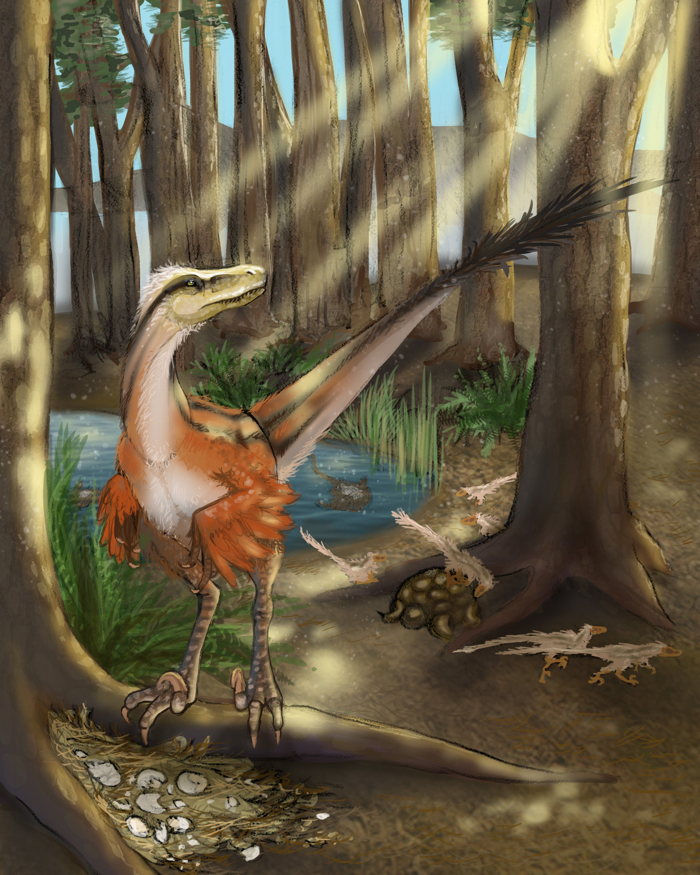 While this realisation was indeed surprising, the injuries found on the skeleton are perhaps even more so.

On the ribs, researchers found healed wounds, and on the claws, they identified gouge and puncture marks, which suggest a fight between two raptors, perhaps in competition over resources or mates. Such behavioural insights are invaluable, and they're just part of what makes this new find so astonishing.

In the bigger picture, this new species can also tell us something of dinosaur evolution and migration. Dineobellator, for example, belongs to a smaller group of dinosaurs called velociraptorines, which have several other members across the ocean.

"This suggests that members from Asia migrated to North America during the Late Cretaceous, near the end of the time of the dinosaurs, and diversified into new species afterward," Jasinski told ScienceAlert.

Then, somehow, some way, these 20 bones survived, bequeathing us with the first significant dromaeosaurid skeleton in this part of the world.