Infant formula is an amazing product that's helped millions of babies and parents - it offers a much-needed substitute for breastmilk when women or babies can't breastfeed or choose not to. At the end of the day, having a baby that is fed is unquestionably best, regardless of the means of nourishment.

But when formula isn't needed - particularly once babies become toddlers - or when choosing which brand to select, there's one thing parents often don't get enough information on: the environmental impact of formula.

Formula production and consumption has major environmental impacts, but despite several attempts from experts and agencies to start the conversation, awareness and research on the topic is abysmal.

Last week, in a damning New York Times report, it was revealed that the US government tried to block a World Health Assembly resolution that would encourage breastfeeding and limit the misleading marketing of formula milk.

Health experts were understandably outraged, and in the days following the report there was a stream of conversation about why policies that support breastfeeding are crucial to public health.

At this point, the health benefits of breast milk have been widely publicized, but breastfeeding is not simply about global health. It's also about sustainability. Even still, breastfeeding is rarely seen as an environmental issue.

Alison Stuebe, a maternal-fetal medicine physician and president-elect of the Academy of Breastfeeding Medicine, believes that the environmental implications of the formula industry have not yet come to the fore.

"I'm really pleased that this is getting publicity, because every single day, every time a baby goes to breast, a $70 billion industry loses a sale. A lot of people don't appreciate that  there is a corporate interest here," Stuebe told Science Alert.

At the same time, however, Stuebe believes the current conversation is missing a key ingredient.

"When we think about it, if all the babies on Earth were formula fed, what would that do to our environment? I think a lot of people don't think about that. That's a piece that sometimes falls through the cracks," she said.

Breastfeeding is remarkably green. In fact, breast milk has been called the most environmentally-friendly food available. It produces zero waste, zero greenhouse gases and has a zero water footprint.

Not to mention the fact that powdered milk comes from cows, and the cattle industry is the second largest contributor to methane emissions - a heat trapping gas around 30 times more potent than CO2.

That's not to say formula feeding is bad, or that we shouldn't do it - after all, everyone knows that disposable nappies aren't great for the environment even though they are widely used. But shouldn't the environmental impact of formula at least be something we're aware of, discuss, and can work to mitigate?

As the marketing of infant formula leads to increased use of formula products around the world, the environmental cost will continue to grow alongside the burgeoning industry. Combine that with a worrying lack of awareness, and - voila! - you have a formula for disaster.

The environmental cost of formula

The best research on this under-reported topic comes from a 2015 report on the carbon footprint of baby formula in the Asia-Pacific region - an area with heavy sales in formula milk.

The extensive and groundbreaking report, which was published by the International Baby Food Action Network (IBFAN)-Asia and the Breastfeeding Promotion Network India (BPNI), carefully examines and analyzes the greenhouse gas emissions (GHG) required to produce each ingredient used in formula, from milk powder to vegetable oil to cane sugar.

"When environmental consequences of the dairy industry are not fully accounted for in business decisions, costs are imposed on communities - increasingly on humanity as a whole - by greenhouse gas emissions, land degradation, and loss of biodiversity," wrote Julie Smith, an Associate Professor and Economist at the Australian National University, in the report.

After multiplying GHG emissions by sales, the study concludes that milk formula is an important contributor to climate change. Overall, the total GHG emissions from milk formula sold in all six countries in 2012 was found to be 2.89 million tonnes, which is roughly equivalent to driving 6,888 million miles in your car, or burning 3,107 million pounds of coal. 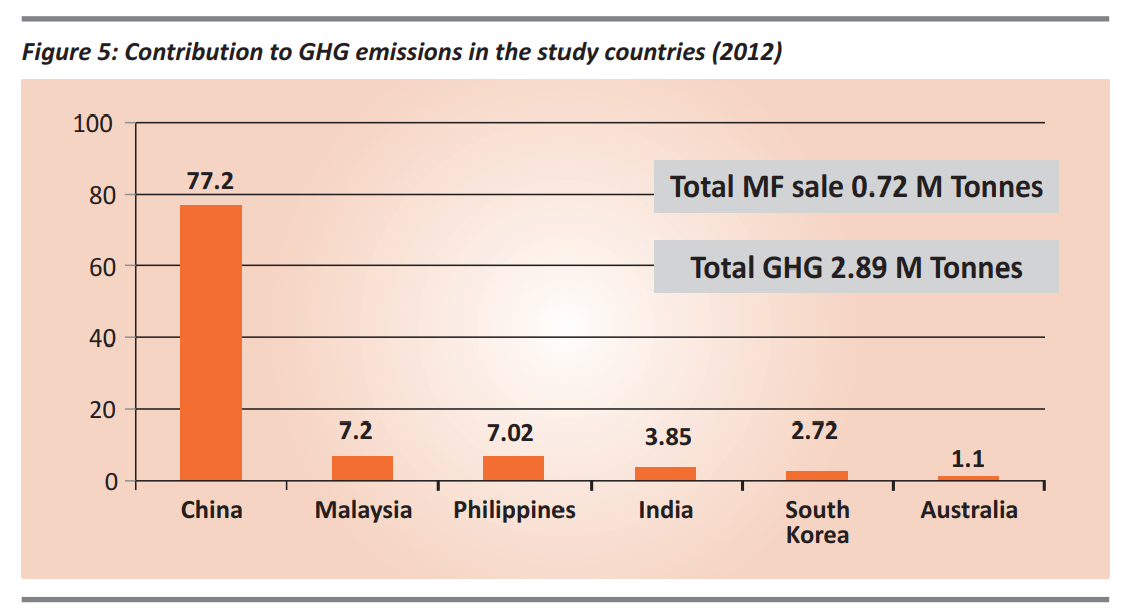 Nearly half of these emissions come from toddler milk formula - a substitute that health experts do not recommend and which the World Health Assembly has identified as potentially detrimental to a child's health.

In China, where formula marketing has taken a strong grip, the study found that toddler milk formula was the single largest contributor to GHG for infant and young child feeding products, making up an extraordinary 43.9 percent of the nation's total milk formula sales.

"Projections show an ever-increasing sale of these products with consequent increase in the GHG emissions," the study warned three years ago.

"More worrisome is the increased use of unnecessary follow-on and toddler milk formulas in all study countries."

Arun Gupta, the Regional Coordinator for IBFAN Asia and one of the authors of the report, says formula feeding is unsustainable and leaves a huge ecological footprint, using up scarce water resources, raw materials and energy sources.

As climate change continues to worsen, food and water resources will become even more scarce, putting global public health at risk. In a cruel twist, children who are breastfed have improved health outcomes and stronger immune systems.

"Given that infant formula production and consumption is one of the major threats to breastfeeding and to the environment, it is essential to increase environmental awareness about the impact of formula feeding," Gupta wrote in a 2014 report.

"It also becomes a necessity to mitigate the damage caused to the environment due to the consumption of infant formula."

It's true - raising awareness about the environmental impacts of formula is crucial, but it is also important not to shame or breed guilt among mothers who cannot breastfeed. Instead, the idea is to promote breastfeeding wherever possible and to limit misleading and aggressive formula marketing.

"It is clearly a mother's choice what she wants to do with her baby and body, however, that decision is heavily influenced by people with a vested interest in the answer," Stuebe told Science Alert.

"This is not about individual mothers, this is about how a corporation preys on a population and promotes a product that is not necessary."

While it's true that breastfeeding rates are increasing the world over, there is still plenty of room for improvement. A 2017 report from the World Health Organization (WHO) and the United Nations International Children's Emergency Fund (UNICEF) reveals that no country in the world - not even one - meets the minimum recommended support for breastfeeding.

"It is time to start talking seriously about how reducing the unnecessary promotion, use and societal costs of formula milk feeding can help tackle the greatest challenge humanity has ever faced, sustaining Mother Earth," concluded Smith.

Editor's note: This story was updated on 20 July 2018 to clarify that ScienceAlert are in no way saying that parents shouldn't formula feed their babies or that it's a bad choice - we support and celebrate every family's right to proudly choose what works best for them. We simply believe that parents should have all the facts available to make an informed decision.