Nobody Panic, But Fleas Carrying Bubonic Plague Have Turned Up in The US

The Black Death is alive and well in the American Southwest.

Over the past several weeks, public health officials in two Arizona counties - Navajo County and Coconino County - have confirmed that fleas in both counties have tested positive for the Yersinia pestis bacteria, the biological agent that causes the three forms of plague.

"Navajo County Health Department is urging the public to take precautions to reduce their risk of exposure to this serious disease, which can be present in fleas, rodents, rabbits and predators that feed upon these animals," the health department announced on August 11 on a county Facebook page.

"The disease can be transmitted to humans and other animals by the bite of an infected flea or by direct contact with an infected animal."

County officials advise making sure that pets aren't allowed to run free, as they could potentially end up picking up infected fleas. Pets can both become infected by the disease and they could carry fleas that could then pass the disease on to human owners.

For anyone concerned they could have been exposed, the health department adds: "Symptoms of plague in humans generally appear within two to six days following exposure and include the following: fever, chills, headache, weakness, muscle pain, and swollen lymph glands (called "buboes") in the groin, armpits or limbs.

"The disease can become septicemic (spreading throughout the bloodstream) and/or pneumonic (affecting the lungs), but is curable with proper antibiotic therapy if diagnosed and treated early."

This isn't an isolated incident. Just a couple months ago, health department officials in New Mexico confirmed that two residents of Santa Fe County had been hospitalised after being infected by the plague.

The bacteria circulating today are still remarkably similar to those bacteria researchers have identified as the cause of the Black Death.

As the CDC explains, it's still a potentially fatal and serious bacterial illness. It's just that now, we can treat it with antibiotics, provided it's caught early enough. 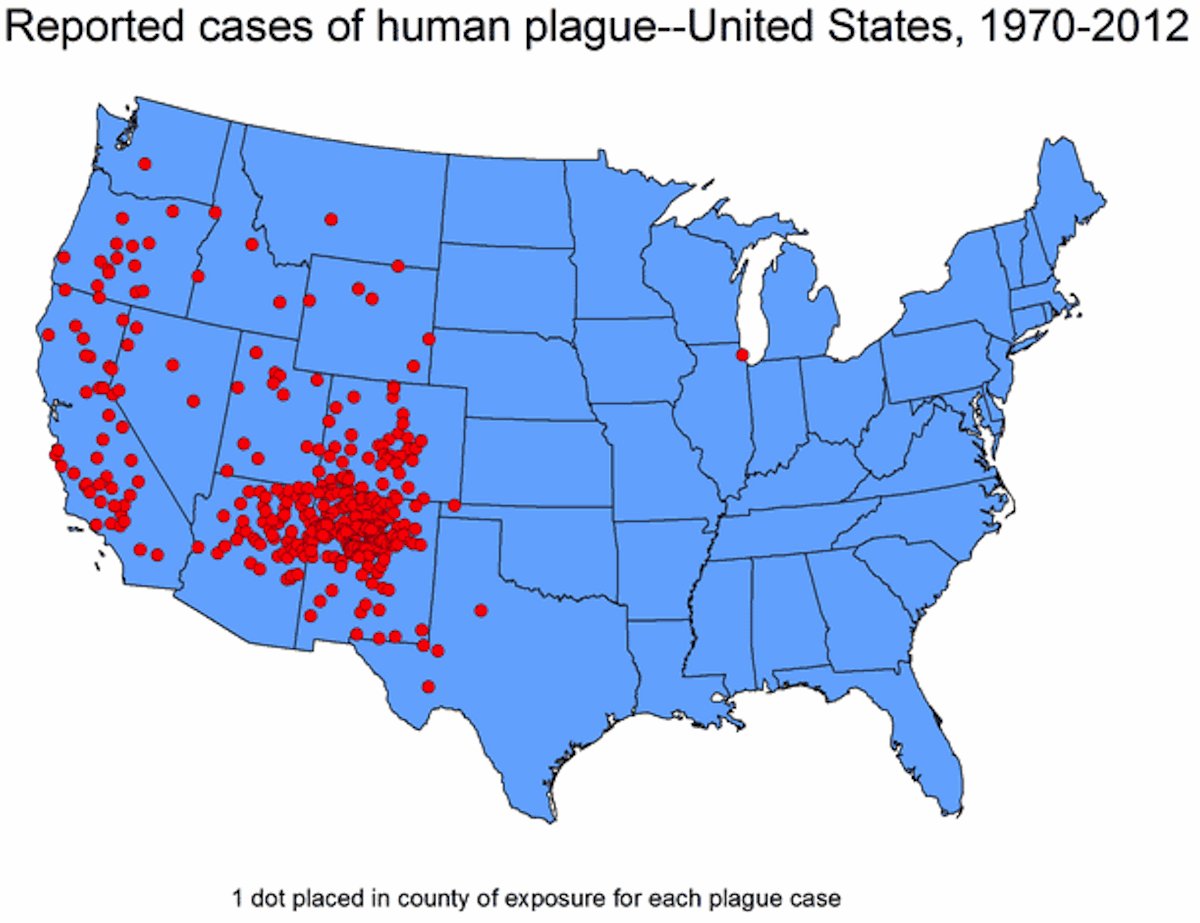 While rats and other rodents have the reputation of being plague carriers, it's really the fleas they harbour that are usually responsible.

Plague kills those rodents just like it can kill humans. In fact, one of the first signs of a plague outbreak is often a mass die-off of prairie dogs or other rodents. (There was a report of a squirrel killed by a plague infection in New Mexico on August 10, according to the ProMED-mail service, which tracks disease outbreaks.)

In the US, plague bacteria tend to thrive in the hot and dry Southwest, where there are a number of rodents - from rats to voles to prairie dogs - susceptible to infection. In general, the bacteria is always out there, spreading among fleas and less frequently among rodent or other mammal populations, occasionally spilling over into humans.

Still, the US only gets a handful of cases - usually between one and 17 every year. Plague is a bigger problem in places that have a harder time shutting down outbreaks. In the US, disease detectives try to find every person an infected individual came into contact with.

That's harder in regions with humanitarian crises or ongoing conflicts, according to the World Health Organisation.

In the 1400s, approximately 50 million people died of the Black Death. It's still one of the scarier infectious diseases out there, with a mortality rate between 30 and 60 percent if untreated.

But fortunately, antibiotics make it possible to treat most cases now. Between 2010 and 2015, there were around 584 deaths.