Regardless of The Language You Speak, You'll Likely Call One of These Shapes 'Bouba'

A simple online experiment has provided some of the most robust evidence to date that the very sound of words can shape human language.

While linguists have generally pictured the origin of many commonly spoken words as influenced by a range of local cultural factors, there is an argument that suggests at least some words emerged on more universal grounds. Sometimes, a sound might 'look' like the thing it describes.

The concept is easily understood when you consider onomatopoeias like 'bang!' or 'poof!', but since the 1920s, psychologists have wondered just how far this relationship might reach, using made-up words like 'bouba' and 'kiki' to test how words influence our mind's eye.

For example, when English speakers hear the word 'bouba' and are asked to think of a shape, they overwhelmingly imagine round, curvy shapes. Meanwhile, the word 'kiki' evokes a spikier and less rounded shape.

The findings suggest there's something about certain sounds that overlap with shapes in our brains, and this subtle form of synesthesia might have helped form some of the words we speak today. In spite of decades of research on the phenomenon, we're still not entirely clear on what causes it.

One possibility is that the letters used to write the words might influence the respective curvature each word invokes. So an international team of researchers has joined forces in one of the biggest studies on the effect to find what kind of influence spelling might have.

They tested the so-called 'bouba/kiki' effect across 917 speakers of 25 languages, including 10 writing systems. On average, over 70 percent of these participants associated 'bouba' with a blob-like shape and 'kiki' with a sharp-edged shape.

Those languages that do not use the Roman alphabet, like Japanese and Georgia, didn't show the association as strongly, yet it still existed at roughly 63 percent, which is significant. 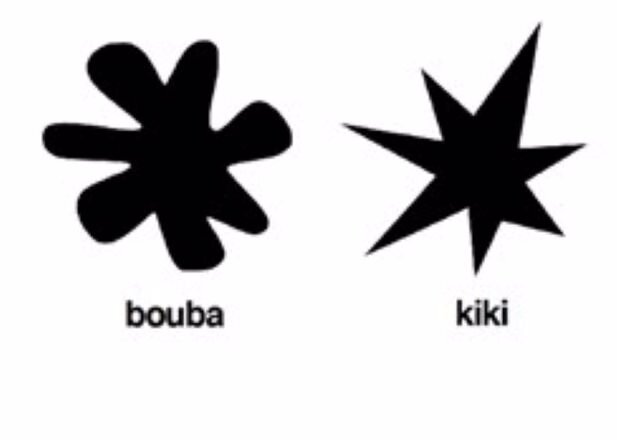 The "bouba/kiki effect." (University of Birmingham)

The results challenge a hundred years of conventionally held wisdom, which suggests that human words and syntax are arbitrary and have no clues about what they describe. Onomatopoeias are usually the only exceptions listed.

The seemingly consistent nature of the bouba/kiki effect, however, suggests intuitive mappings in our brains connect aspects of the voice to specific visual properties. Some researchers think this could have created a 'natural constraint' on what words humans developed when creating their languages.

Some studies on toddlers, for instance, have shown that even when we are young and learning to listen and speak, we still associate rounded and angular objects when we hear the words 'bouba' and 'kiki'.

"Overall, we found strong evidence for the effect across languages, with bouba eliciting more congruent responses than kiki," the authors write.

"Participants who spoke languages with Roman scripts were only marginally more likely to show the effect, and analysis of the orthographic shape of the words in different scripts showed that the effect was no stronger for scripts that use rounder forms for bouba and spikier forms for kiki."

Despite a few individual exceptions, this linguistic pattern remained statistically significant across cultures, indicating a robust universal trend. Of the languages tested, only Mandarin, Albanian, Turkish, and Romanian speakers did not show this common bouba/kiki alignment.

Further research will be needed to explain why that is, but the authors suspect the words bouba or kiki might have happened to sound like other words in those languages.

In Romanian, for instance, the word bubă [bubə] translates to 'wound', which might have prompted speakers to think of sharp, cutting shapes, not rounded shapes.

You might be wondering why the meanings behind nonsense words like kiki and bouba matter. It turns out that these sorts of experiments can reveal a lot about how human language might have evolved.

Linguists have been arguing over whether or not there is a universal language system inherent to humans for hundreds of years, and the idea that there may be a natural process for word-formation has largely fallen out of favor in the past century.

In 1960, American biolinguist John L. Locke popularized the idea that there are no 'natural' connections between a word's form and its meaning. In recent years, however, some linguists have increasingly questioned that assumption.

While Indo-European languages do tend to rely on randomly chosen words, which don't allow you to infer meaning from sound, other languages like Japanese, Korean, Southeast Asian languages, and indigenous languages from South America and Australia rely more on sound-symbolic words.

This type of sound symbolism is called 'iconicity', and it could be a more pervasive property of human language than previously thought.

"If bouba/kiki were exclusively tied to writing systems and only observed for specific language groups, it could not have played any role in the origins of spoken language," the authors explain.

"By demonstrating that a correspondence between vocal signals and visual shapes is widely recognized irrespective of writing systems, bouba/kiki becomes more relevant for theories of language evolution."

For example, the findings suggest iconicity in spoken languages goes beyond onomatopoeias, with the sound of words possibly conveying information on size, touch, or color.

In the absence of a well-established language, this inherent taste for sounds and their meanings could have helped humans understand one another and communicate on a more complex level.

Given how contentious the field of human linguistics can be, there will need to be more experiments on the bouba/kiki effect. Nevertheless, the findings suggest there's something about the human brain that has us seeing the same shapes when we hear the same words.

The study was published in Philosophical Transactions of the Royal Society B.