A 100-million-year-old chunk of amber has revealed the oldest-ever sample of animal sperm, and each individual cell is enormously long.

Even more impressive, this giant sperm - several times larger than human sperm - comes from a shrimp-like crustacean smaller than a poppyseed.

Just shy of 0.6 millimetres, this ancient bivalve belongs to a still-living class of microcrustacean known as ostracods, which are famous for housing sperm up to ten times larger than themselves.

That might sound impossible, but when these microscopic cells are twisted and tangled up into tiny little balls, they can travel through the female reproductive tract easily, fending off other, smaller tangles in competition. 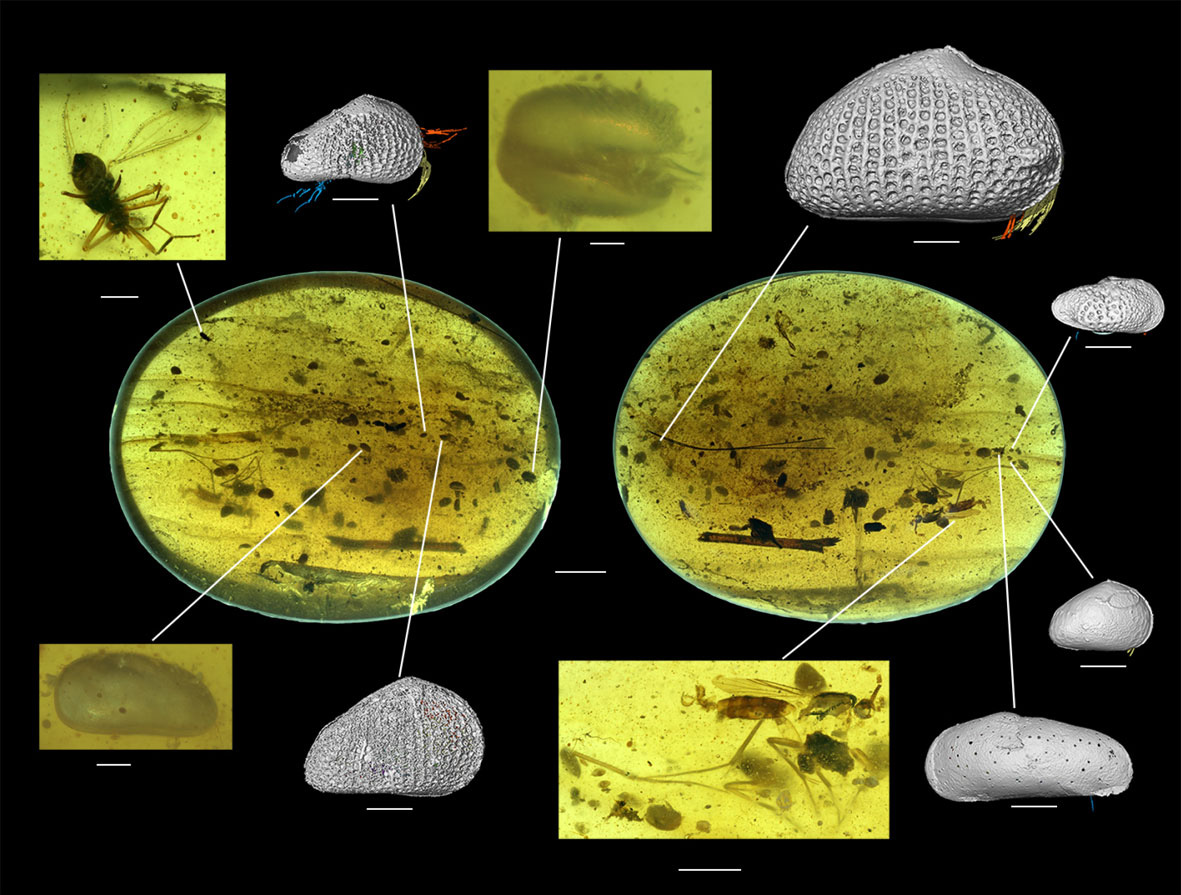 The studied amber piece showing the position of the specimens. (Wang et al., Proceedings B, 2020)

Using a micro-CT scanner, researchers have now revealed 39 of their ancient crustacean relatives, all in the same slice of amber. Even more astonishing, this frozen community still has some of the same reproductive traits we see in ostracods today, including giant sperm.

Not only were their ancient relatives found with similar male 'claspers', these fossilised bodies also contained sperm pumps, eggs and - best of all - female receptacles filled with sperm.

"The fact that the seminal receptacles of the female are in an expanded state due to being filled with sperm indicates that successful copulation had taken place shortly before the animals became entrapped in the amber," the authors write.

Measuring individual cells in these tangled masses is impossible, the authors admit, but they say at minimum the sperm are at least 200 µm long (0.2 mm). That's at least a third of the ancient creature's entire body length.

It's also the oldest sample of animal sperm by a long shot. While other ostracod fossils from a hundred million years ago have shown hints of giant reproductive organs, we've never before gotten our hands on an actual sample from this time.

In 2014, 16-million-year-old freshwater ostracods, discovered in a cave in Australia, were found containing sperm 1.2 mm long. But the new specimen, discovered in Myanmar, is 83 million years older. In fact, it doubles the age of the oldest unequivocal fossil animal sperm.

In all that time, it seems ostracod reproduction has remained largely the same - "a paramount example of evolutionary stasis," as the authors say.

During sexual reproduction, both ancient and modern ostracods probably use their fifth limbs like a 'hook' to grab onto females. Once they have a hold, they can then insert their erectile tissue and pump out an "exceptionally long but immotile sperm", pushing it up two long sperm canals in the female body.

Once these sperm reach the seminal receptacles, the authors think they begin to move, settling into an "organised assemblage" so they can begin fertilising the eggs. 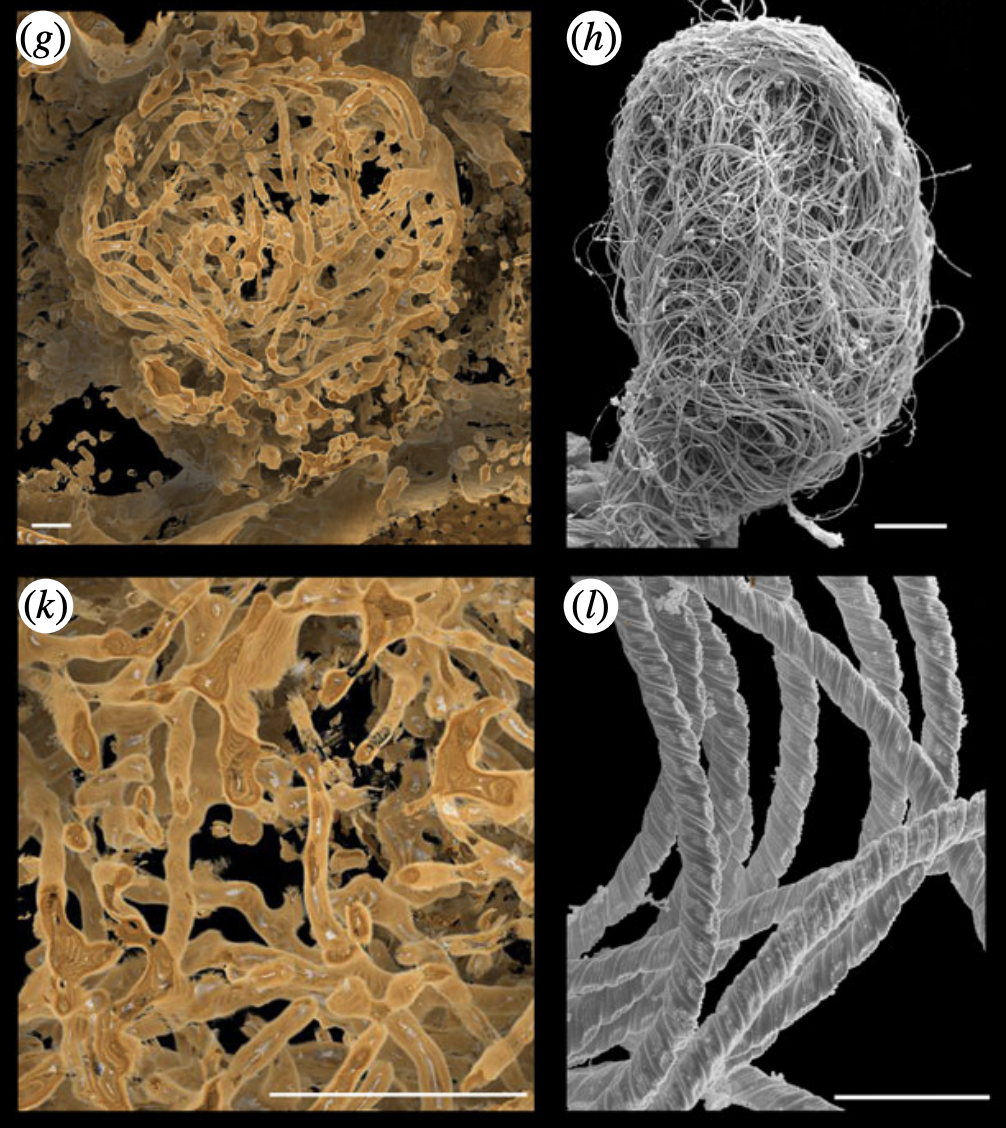 While it might sound counterintuitive at first, some of the smallest creatures on Earth produce some of the largest sperm. When females copulate with more than one mate, sperm must compete; scientists think having larger units could be more advantageous. That said, giant sperm - like those in ostracods - come at a high price for both males and females.

First and foremost, their sexual machinery simply has to be bigger, and for such a tiny animal already, that's a serious trade-off. Some modern species dedicate a third of their body volume to reproduction alone.

As such, it remains a mystery as to how this giant trait evolved and when it showed up. Direct evidence is truly scarce. While crustaceans have calcified shells that leave behind rich fossil records, finding intact soft tissue in fossils is exceedingly rare.

This discovery is truly remarkable, not only because the amber has preserved soft tissue from several individuals for a hundred million years, but also because of all the similarities.

"The male clasper, sperm pumps, hemipenes and female seminal receptacles with giant sperm of fossil ostracods reveal that the reproduction behavioural repertoire, which is associated with considerable morphological adaptations, has remained unchanged over at least 100 million years," the authors write.

The study was published in the Proceedings of the Royal Society B: Biological Sciences.