One of Earth's Largest 'Waterfalls' Is in The Ocean, And We Just Found Its Main Source

Victoria Falls is said to be the largest waterfall on Earth, and Angel Falls the highest, but no matter how impressive they might look to us, both these natural wonders fall far short of the true victors.

The largest and most powerful waterfalls we know of are actually surrounded by water, deep beneath the lapping waves. Tucked between Iceland and Scotland, the Faroe Bank Channel Overflow is one the mightiest of its kind.

This narrow, super-deep passage connects the Norwegian sea to the North Atlantic Ocean via a continuous flow of water so cold and dense, it sinks right to the bottom.

As this heavy river crosses one of the deepest parts of the Greenland-Scotland Ridge, it creates a massive undersea cascade, with water plummeting roughly 840 metres (2,756 feet), right into the Atlantic.

It's one of the most researched spots in our ocean, monitored closely since 1995, and yet we've only just discovered the most powerful current that feeds it.

Up until now, the Faroe Bank Channel overflow was thought to come mainly from a stream of cold water running along the western side of the channel. And for a while, at least, that may have been true.

Today, however, new research suggests most of the Faroe waterfall is actually driven by a silent, eastern stream, which shoots cold water into the channel via a deep, jet-like ocean current.

"This was a curious but very exciting finding, especially since we are aware that a very similar flow structure exists in the Denmark Strait," says Léon Chafik who researches physical oceanography at Stockholm University in Sweden.

The neighbouring Denmark strait, tucked between Iceland and Greenland and parallel to the Faroe channel, is home to the world's largest known waterfall, three times the height of Angel Falls.

As its cold waters meet up with the Faroe overflow on the other side of Iceland, these fast-moving waters create a powerful flow that spills into the deep north Atlantic. 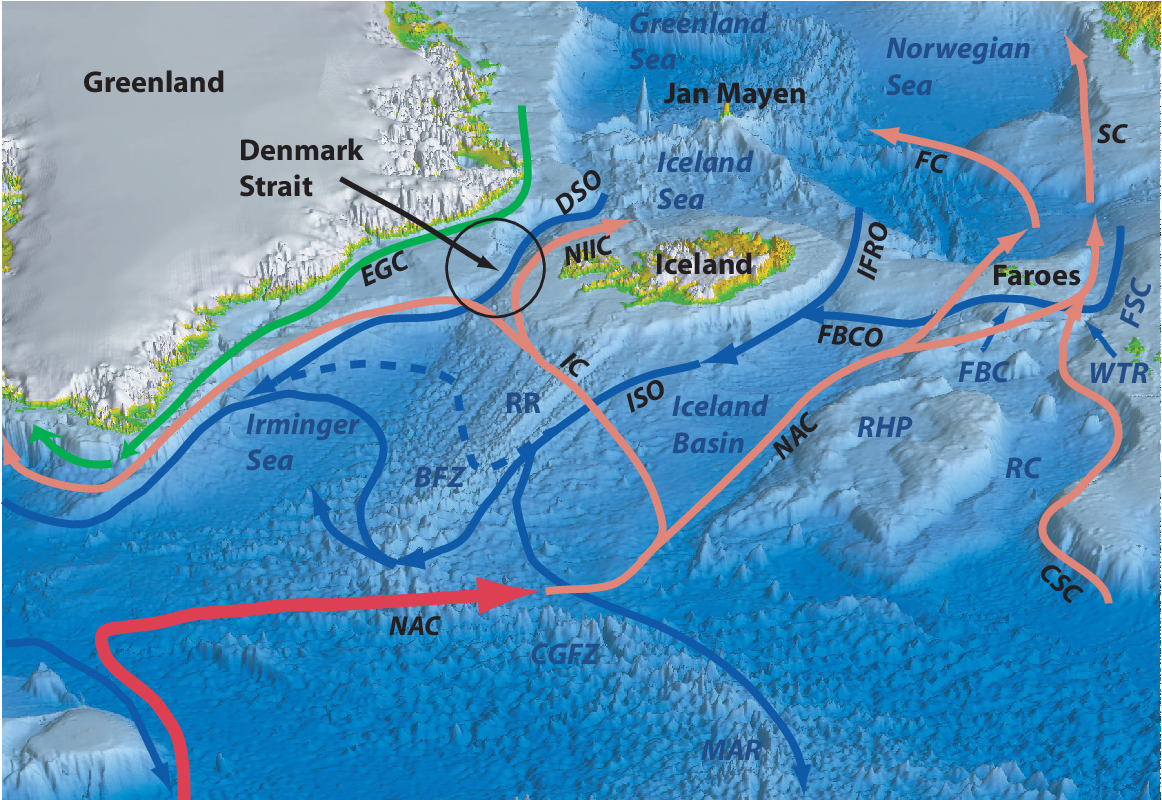 The AMOC has two pathways, one that runs deep, carrying cold water from higher latitudes to the Atlantic, and the other that runs shallow, transporting warm and saline Atlantic waters to the north.

This circulation is a major regulator of the global climate system, and yet we still don't know enough about it.

Gathering new measurements from moorings and vessels, as well as data from current monitoring systems, researchers created a high-resolution ocean circulation model to figure out where most of the water at the Faroe overflow is actually coming from.

Instead of turning directly into the Faroe-Shetland Channel, which is the quickest way to the Faroe overflow, researchers found it appears to trace another more circuitous path.

Regardless of the warmer water that flows overhead, this other current appears to travel almost to Norway before turning south and heading towards the waterfall and away from the continent. The round-about path is also influenced by wind conditions, which suggests that certain atmospheric conditions can enhance its strength.

In the 2000s, for instance, this eastern channel was anomalously strong. In fact, this is what tipped scientists off.

During those years, the direct channel to the Faroe overflow was at a record low, while the overflow itself was at an all-time high. Some other channel, it seemed, had to be feeding the waterfall.

"This study shows, for the first time, that the [Faroe Bank Channel Overflow] is, regardless of upstream pathways, primarily fed by a strong (and what seems to be a permanent) current jet," the team writes in their study.

But while this channel might be permanent, its strength can absolutely change. The authors say different wind conditions in the Nordic Sea appear to cause water flowing through the Faroe channel to be drawn from different routes and depths.

In the 1990s, for instance, the Faroe overflow was weaker than normal and its primary source of water came from the north of Iceland along the western, more direct route. Now, for some reason, that's changed.

"Because this newly discovered flow path and ocean current play an important part in the ocean circulation at higher latitudes," says Chafik, "its discovery adds to our limited understanding of the overturning circulation in the Atlantic Ocean."

We clearly need to know more about this major gateway to the Atlantic.