These Bright Orange Crocodiles Could Be Evolving Into a New Species

Orange dwarf crocodiles living in the caves of central Africa could be evolving into a new and separate species, say scientists, giving us a fascinating look at animal adaptation happening before our very eyes.

These creatures, discovered in Gabon in 2008, are already strange enough – living in the darkness, feeding off bats and crickets, and with an orange sheen to their scales that isn't the hue you first think of when you think of a crocodile.

The dimness of their dwelling and the other conditions in which they live is what's causing this rapid mutation and evolution, say the international team of researchers, and a new round of genetic testing suggests a new species could have been created. 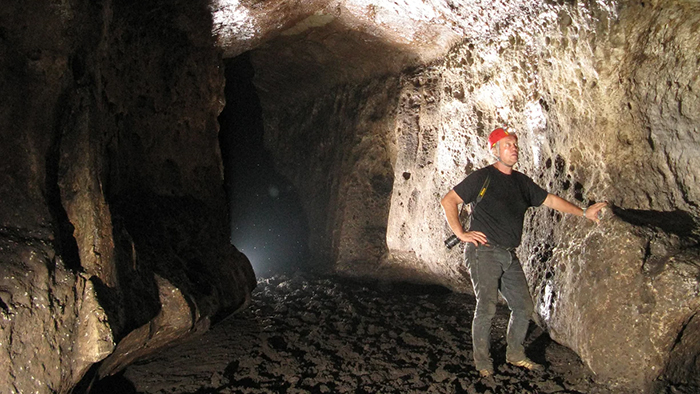 "As a result of that isolation and the fact that few individuals come in or go out, they're in the process of [becoming] a new species," one of the team, herpetologist Matthew Shirley from Florida International University, told Sarah Gibbens at National Geographic.

"Whether that happens soon or not is anyone's guess."

Since they were first discovered, scientists have been studying the movements and breeding patterns of these African dwarf crocodiles, comparing them with close neighbours living on the outskirts of the cave network.

The diet of bats and crickets that the orange crocs prefer is different to what crocodiles eat outside the caves - mainly fish and crustaceans.

And the cave-dwelling reptiles are also changing colour, being turned orange as they get older by the presence of the bat excrement or "guano" in the water in which they live.

"Bat guano is largely comprised of urea," Shirley told National Geographic. "When they're sitting in this bat guano slushie, we think the highly basic pH water is tanning their skin."

But it's the DNA analysis of around 30-40 cave crocs that really has experts excited. It showed up a unique haplotype not found in the animals outside the cave – a group of genes being passed down together.

"We could say that we have a mutating species, because [the cave crocodile] already has a different [genetic] haplotype," one of the researchers, Richard Oslisly from the The French Research Institute for Development, told Jeremy Hance at The Guardian.

"Its diet is different and it is a species that has adapted to the underground world."

That brand new species distinction has yet to be confirmed, and the team is working on a new paper to report its latest findings. If these are now a completely different kind of crocodile, however, there's one mystery left to explain – how they're breeding.

While researchers have spotted younger crocs leaving the caves to mate and produce young, it's not clear whether the older reptiles still have the means or the motivation to trundle out into the light.

And if they are sticking to the caves once they reach a certain age, they must have found a way of laying eggs without the rotting vegetation usually needed to incubate them.

The team thinks some outside crocodiles still make their way into the caves with every passing generation, something which may have been going on for thousands of years since the cave-dwelling crocs first ventured into the darkness.

And as well as a potential new species, this study is teaching us more about how crocodiles can adapt in various environments. In fact, the caves aren't that different to a croc's normal habitat, reaching 22 degrees Celsius (71.6 degrees Fahrenheit).

Now there are plans to turn the area into a wildlife sanctuary so we can take a closer look at these strange beasts.

A paper on the latest research will be out in several weeks, but the team has published earlier findings in the African Journal of Ecology.