'Oumuamua Came From Outside The Solar System. Astronomers Just Got Closer to Finding Its Source

After a Hawaiian telescope spotted an object called 'Oumuamua flying through space in October 2017, astronomers realised it was weird.

The object had a cigar-like shape and was 750 feet (228 metres) by 115 feet (35 metres) in size, or roughly as large as a skyscraper. It was dark red in colour and moving inexplicably fast. Just in case, one group of astronomers even scanned it for alien radio emissions (yet heard nothing).

Most importantly, 'Oumuamua wasn't circling the Sun like a typical space rock.

Instead, it had dived between Mercury and the Sun, swooped below our home star, and was zooming past Earth on its way out of our Solar System. This showed that 'Oumuamua – whose name means "a messenger from afar, arriving first" in Hawaiian – was actually an interstellar traveller from beyond the Solar System.

Astronomers eventually determined 'Oumuamua wasn't an asteroid but instead a "mildly active" comet.

But if it is not from our Solar System, then where did it come from?

Using the newest and most precise star map ever created, eight astronomers have located four stars that are candidates for 'Oumuamua's home. Each star's path in relatively recent history matches somewhat closely to the comet's calculated path.

Their study, highlighted Tuesday in a European Space Agency (ESA) press release, was recently accepted for publication in the Astronomical Journal, a peer-reviewed science publication. 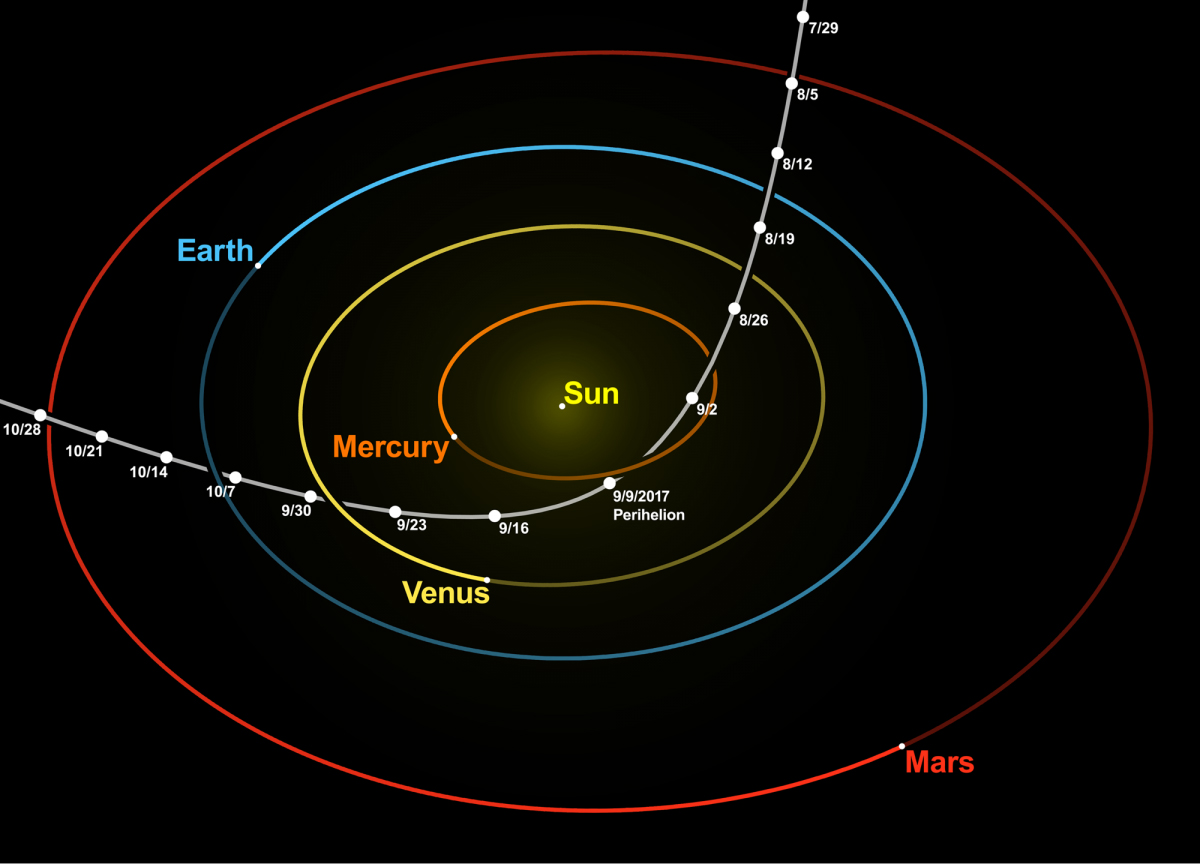 The path of 'Oumuamua through the Solar System (nagualdesign/Tomruen/Wikipedia/CC BY-SA 4.0)

How the team found candidate homes for 'Oumuamua

The research team began its search with an unprecedented map of 1.7 billion stars created by an ESA spacecraft called Gaia. The new map, released in April, is the second major Gaia dataset published by the ESA since the spacecraft launched in December 2013.

The map doesn't just note the position of the stars, though: It also shows where stars are moving through space and how fast.

About 7 million stars in Gaia's database have motion data that is detailed enough to let astronomers precisely "rewind" their positions to millions of years in the past.

By comparing the historic path of 'Oumuamua against these millions of stellar paths, the team discovered four candidates which line up within a few light-years of the comet.

One of these star systems may have ejected 'Oumuamua toward Earth, likely via a giant planet early in the system's formation.

All of the candidates are dwarf stars, which means they are small and burn very hot. Two were already named (HD 292249 and HIP 3757) and two others were temporarily named by the team ("home-3" and "home-4").

The closest match to the path of 'Oumuamua was with the dwarf star HIP 3757. The paths of the star and wayward comet came within two light-years of each other some 1 million years or so ago.

So, as of right now, this star may be the best candidate yet for where 'Oumuamua hails from. But astronomers are hardly satisfied with that answer. 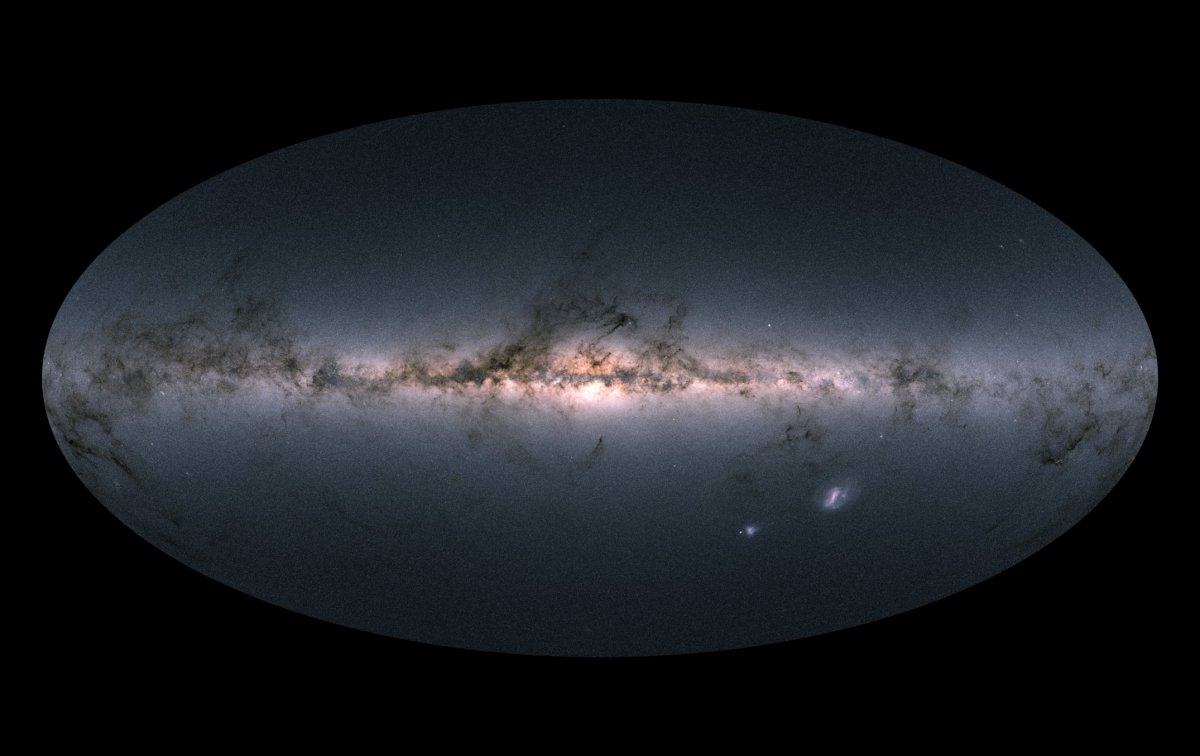 Why the search is not over

The researchers behind the new study aren't confident they have found 'Oumuamua's home.

For one, Gaia's latest and most detailed sample of 7 million stars – while vast – is only partial. Some 180 million stars exist closer to Earth than the ones examined by the research team.

"Hence it is [therefore] unlikely that we would find the home system in our study," the authors wrote.

The team also looked for encounters within the past few million years. In reality, 'Oumuamua may have travelled much farther and longer before reaching our Solar System – perhaps tens of millions of years or more, the authors said.

In addition, the four stars pinpointed by the search aren't yet known to harbour any planets, let alone worlds large enough to kick 'Oumuamua all the way to Earth.

Finally, the speed of 'Oumuamua is better explained by a two-star (or binary) system, yet none of the four systems described by the study have more than one star in them.

The astronomers behind the work are waiting for Gaia's third star map to be released.

Those data should describe the ultra-precise motions of 10 times as many nearby stars as the team looked at for their study – perhaps including the one from which our interstellar visitor originated.

"The search for 'Oumuamua's home continues," the authors said.

More from Business Insider:
Trending News
Astronomers Find What May Be a Habitable World 31 Light-Years Away Space2 days ago
Māori Voyaged to Antarctica at Least 1,000 Years Before Europeans, Study Finds Humans2 days ago
Scientist Accidentally Discovers The Oldest Brain of Any Vertebrate Nature4 days ago