This Pacific Island Was Expected to Disappear, But It's Actually Growing Larger

The Polynesian island nation of Tuvalu has long been marked as a prime candidate to get swallowed up by the ocean as sea levels rise, but new research shows the land mass of the nation is actually expanding.

That's based on aerial photographs and satellite imagery taken of Tuvalu's nine atolls and 101 reef islands between the years 1971 and 2014. Researchers found eight of the atolls and nearly three-quarters of the islands grew in size in that time.

Overall, the land area increase was 2.9 percent, even while recorded sea levels rose around the coasts of the country. The team from the University of Auckland in New Zealand says we may have to rethink how many island nations like Tuvalu are likely to disappear.

"We tend to think of Pacific atolls as static landforms that will simply be inundated as sea levels rise, but there is growing evidence these islands are geologically dynamic and are constantly changing," says one of the researchers, Paul Kench.

"The study findings may seem counterintuitive, given that [the] sea level has been rising in the region over the past half century, but the dominant mode of change over that time on Tuvalu has been expansion, not erosion."

So with sea levels around Tuvalu rising at twice the global average over the study period – about 4 millimetres or 0.16 inches every year – how is the land mass expanding at the same time?

The researchers say wave patterns shifting sediment, sand, and gravel around, plus material dumped by storms, could be offsetting coastal erosion.

The team also suggests that while climate change is still very much a threat to the existence of atoll nations, their inhabitants can still plan for a long-term future, perhaps by focussing community development on the larger islands that are less under threat. 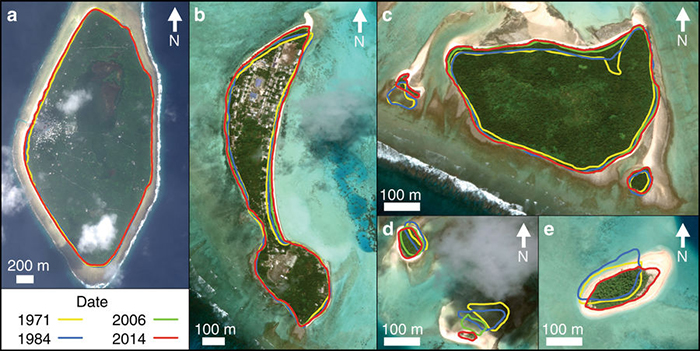 Some of the Tuvalu islands. (University of Auckland)

Not everyone is completely satisfied with the new study, however. Tuvalu Prime Minister Enele Sopoaga told reporters at a press conference that the research doesn't take into account habitable land areas and effects such as saltwater intrusion.

"As the leader of the Tuvalu, about which most of the report has paid most of its focus, I find it totally unfortunate and perhaps untimely in that the news item was never allowed responding or verifying by Tuvalu authorities," said the PM, as The Fiji Times reports.

The Tuvaluan government is preparing a response to the new study, so we'll have to wait until it appears to see the issues that are raised. In the meantime, the research from the University of Auckland has been peer-reviewed and accepted for publication.

What the team behind the new study stresses is that this is in no way an excuse not to try and mitigate the effects of climate change: we know that some Pacific islands have already been claimed by rising sea levels, and more are thought to be under threat.

The researchers also write in their published paper that the people of Tuvalu will still need to adapt to survive – it's not going to be enough just to sit back and hope that the island land mass keeps expanding.

That said, the study does suggest that inhabitants in Tuvalu and other similar island nations may have more time than they realise, and might not necessarily have to migrate long distances and abandon their homes to avoid the rising tides.

"On the basis of this research we project a markedly different trajectory for Tuvalu's islands over the next century than is commonly envisaged," says Kench.