People Are Dipping Their Testicles in Soy Sauce, So Here's Some Science

You didn't misread that headline. People have been putting soy sauce on their testicles to see whether their nether parts can detect the salty condiment, and recording their reactions for the benefit of social media, particularly Tik Tok.

How did we get here in the year of our lord 2020, you ponder? In short, the internet has been playing telephone with some actual science, originally published in PNAS in 2013.

When Bedrich Mosinger and colleagues from the Monell Chemical Senses Center in Philadelphia published a mouse study on taste receptor involvement in male fertility, they probably didn't expect it to launch a Tik Tok trend seven years later.

Yet here we are.

Now, male testes do have taste receptors. According to various sources, Tik Tok user Regan kicked off the trend upon discovering this fact, asking people with testicles to "dip your balls in something, it's for science and I must know."

Unfortunately, the source she cited was Daily Mail, whose report on the original study made some ballsy claims.

The distinction here is that testicles don't have tastebuds (clusters of taste receptor cells) and they can't taste soy sauce. But with surprising vigour, the science quickly went from this:

To this in the press release: 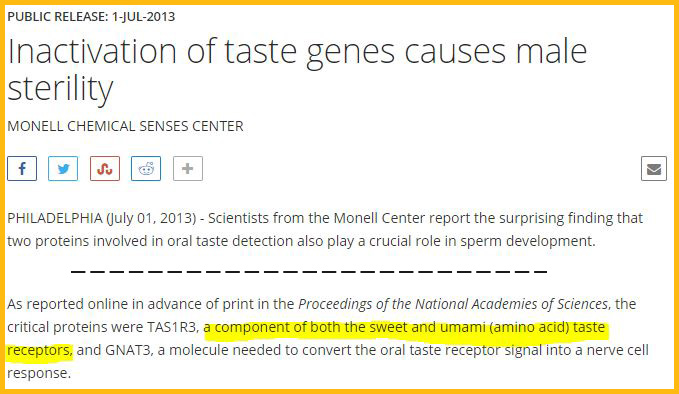 To this in the Daily Mail article: 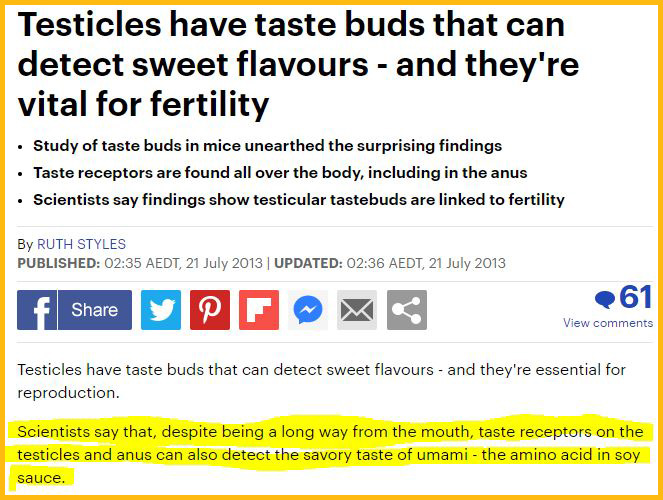 To this Tik Tok.

Next thing the world knew, the innocuous mouse research ended up with a dude in his car putting soy sauce and strawberries down his pants.

The actual science of taste receptors is really cool, though.

"Taste buds are in our mouths and upper oesophagus only, and are a group of taste receptor cells. The signals from the taste buds are sent from the mouth to the brain so that we can consciously perceive tastes," Emma Beckett, a food and nutrition scientist from The University of Newcastle in Australia told ScienceAlert.

Now, it's true that receptors endowed with the unique capability to detect the five basic tastes are scattered throughout the human body. According to a 2013 review in Molecular Human Reproduction, we've found them in places "such as the digestive system, respiratory system, brain, testis and spermatozoa."

This DOES NOT MEAN you can taste things with your genitals, people. We didn't think we'd ever be spelling that out, but here goes.

"These are not taste buds, they don't activate the gustatory cortex in the brain," Beckett told ScienceAlert. In fact, these rogue taste receptors don't always appear to serve a function at all, which is typical of how evolution goes about doing things.

"Where they are functional, they are detecting the same molecules as in the mouth, but triggering different responses," explained Beckett.

"You can just think of them like any other receptor in the body that is monitoring the environment. They might detect infections, as bacteria have sweet structural compounds and secrete bitter and sour things as waste. In the lungs and nose, there is evidence that they are involved in regulating inflammatory responses."

And in the testes? A review published in the International Journal of Molecular Sciences just last year will happily inform you that we're not entirely sure just yet, but it seems "that taste receptors are functionally operative in controlling successful sperm production".

But what of the folks who, upon accepting Regan's challenge, claimed to be able to detect the umami of soy sauce with their scrotums?

As IFLS neatly points out, it "would be like trying to taste soy sauce by dabbing it on the outside of your cheek." They're probably just smelling it.

In conclusion: kids, don't get your science knowledge from tabloids.