New Zealand locals reportedly flocked to Muriwai Beach yesterday, to catch a glimpse of the so-called Muriwai Monster - a sprawling mass that looks exactly like something you’d drag up from the depths of the ocean.

With its thick black tendrils writhing in the Sun, the bizarre object looks a lot like the massive chunk of seabed that was lifted 2 metres above the ground by an earthquake in New Zealand last month, but this time, the explanation is a whole lot less violent.

The photos were taken by local woman, Melissa Doubleday, who posted them on Facebook for identification.

She spotted the object on Muriwai Beach, located on the west cost of New Zealand's North Island, and it was reportedly still moving at the time.

"I actually thought it was a washed up whale as I approached it, so weird," Doubleday told Jackson Thomas at Stuff. "It looks like worms with shells I've never seen before with these funny creatures that just [came] out." 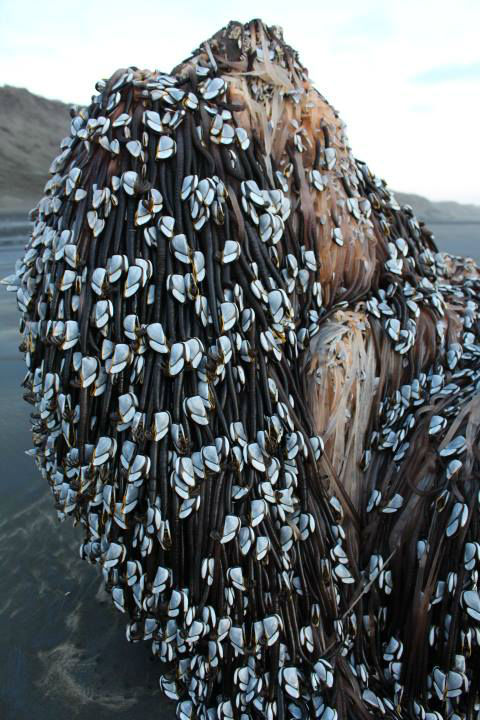 "It's got a putrid smell when you're downwind," she said, "and when you look closely, it looks like wiggling worms."

According to the New Zealand Marine Sciences Society, the object is very likely a massive piece of driftwood covered in gooseneck barnacles - strange, filter-feeding crustaceans that attach themselves to submerged rocks, debris, and ships - often in great numbers.

There are a number of gooseneck barnacle species, but this one appears to be Lepas anatifera. It attaches itself to a hard surface using those flexible, muscular stalks called peduncles, which can grow up to 80 cm long (31 inches). Gooseneck barnacles feed using a number of brown, 'feeding tentacles' that unfurl from their shells like so:

@GordonRamsay may be interested in these goose barnacles found in abundance today on #Achill beach We're following the recipe tonight. pic.twitter.com/JYb79B3ZrI

Unfortunately for these particular creatures, barnacles are the only 'sessile' crustaceans on Earth, meaning once they attach themselves to something, they can never move.

They actually produce a kind of 'cement' that permanently attaches them to whatever surface they choose, and if that surface happens to wash up on a beach and cook its residents in the Sun, there's nothing they can do about it.

"Everything on it has died now, and it smells really bad. Went up there yesterday to have another look!" Doubleday posted on Facebook earlier today.

New Zealand has been experiencing more than its fair share of strange things being dredged up from the depths of the ocean lately.

Last month, a magnitude 7.8 earthquake tore through the country, and was so powerful, it dragged the sea floor 2 metres above the ground, revealing its strange, lumpy exterior:

Hopefully its residents made it back into the ocean in time.