The Perseverance rover has been searching the dusty and rocky landscape of Mars' Jezero Crater for signs of life since it landed last year. But now, the rover has spotted human garbage on the surface of the red planet.

On Tuesday, the Perseverance team shared on Twitter that they'd spotted what seemed to be a piece of the thermal blanket used to protect the rover from the extreme temperatures it experienced during landing.

"It's a surprise finding this here" since the robot's descent happened about 2 km – just over a mile away, the team wrote. "Did this piece land here after that, or was it blown here by the wind?"

This isn't the rover's only piece of litter on Mars. In April, the Ingenuity helicopter captured a bird's-eye view of human-made space junk – the landing gear that helped it, and the Perseverance rover, get to Mars. 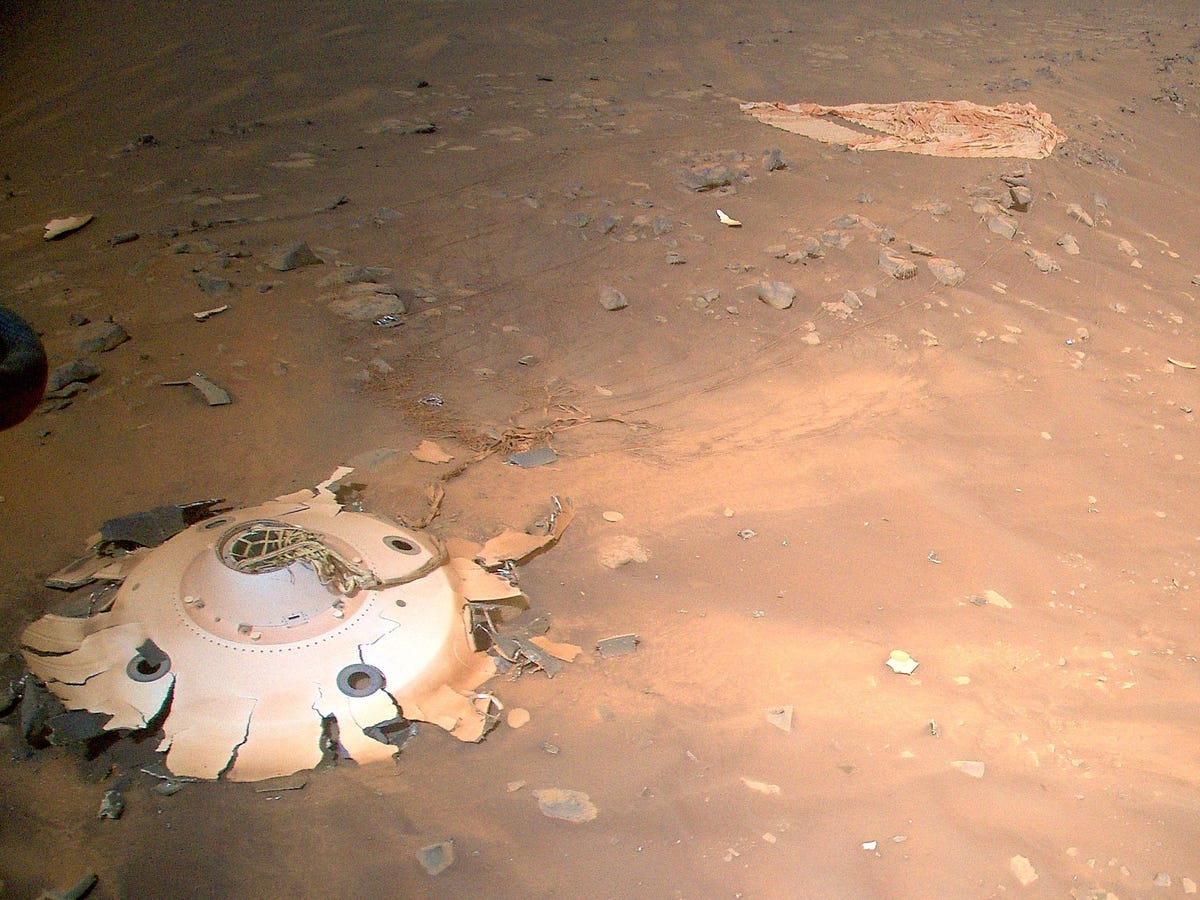 "Perseverance had the best-documented Mars landing in history, with cameras showing everything from parachute inflation to touchdown," Ian Clark, a former Perseverance systems engineer who now leads the effort to haul Martian samples back to Earth at JPL in Southern California, said in a statement.

He continued: "If they either reinforce that our systems worked as we think they worked or provide even one dataset of engineering information we can use for Mars Sample Return planning, it will be amazing. And if not, the pictures are still phenomenal and inspiring."

Perseverance's main mission is to hunt for signs of ancient microbial life near its landing site Jezero Crater, an ancient river delta.

Space junk is a growing concern for space agencies.

Fragments of missions left behind in space – like the boots, shovels, and entire vehicles the Apollo missions left on the Moon – can contaminate otherwise pristine planetary bodies.

And as Earth's orbit gets more crowded with satellites and space junk, leaving Earth for space exploration is becoming increasingly dangerous. Plus all that space junk surrounding the Earth – including defunct satellites, burned-up boosters, screwdrivers, parachutes, and other leftovers – can be perilous for the International Space Station.

That shiny bit of foil is part of a thermal blanket – a material used to control temperatures. It's a surprise finding this here: My descent stage crashed about 2 km away. Did this piece land here after that, or was it blown here by the wind? pic.twitter.com/uVx3VdYfi8

Still, restrictions protecting space from pollution are scant. Current space law has not changed much since the Outer Space Treaty, which was hammered out in 1967 and isn't too detailed. More than half a century later, as celestial bodies like Mars become junkyards, the treaty's gaps stick out.

Aparna Venkatesan, an astronomy professor at the University of San Francisco, told an audience at an American Natural History Museum event last month that enshrining protections against polluting the space environment will require defining it as a common heritage of human civilization.

"Do we view space as our shared ancestry?" she asked. "Whose heritage is it and how do you honor it?"