Here's the best evidence I've ever seen for water on Mars: NASA's Perseverance rover came across a tangled mess of string on Mars, which looks like snarled fishing line left behind by a frustrated angler. Where there's fishing, there's gotta be water, right?

Actually, this tiny piece of trash is likely something left over from Perseverance's parachute, or descent stage, or even the backshell, which all worked in tandem to bring the rover safely to the surface of Mars back in February of 2021.

Our lead image is a closeup view of the tangled string with Perseverance's onboard Front Right Hazard Avoidance Camera A. You can see how tiny the string is in this image below, comparing it to the rover's wheel and end of the rover's robotic arm. The arm's "turret" is touching a rock from which the rover's drill had likely just taken a sample. The turret is like a hand that carries scientific cameras, mineral and chemical analyzers for studying the past habitability of Mars, and for choosing the most scientifically valuable sample to cache for future possible sample return to Earth.

Very likely, the Martian wind blew the string close to the rover. And like a tumbling tumbleweed, the string has now moved on, as by just a few days later, the string is missing from the scene. 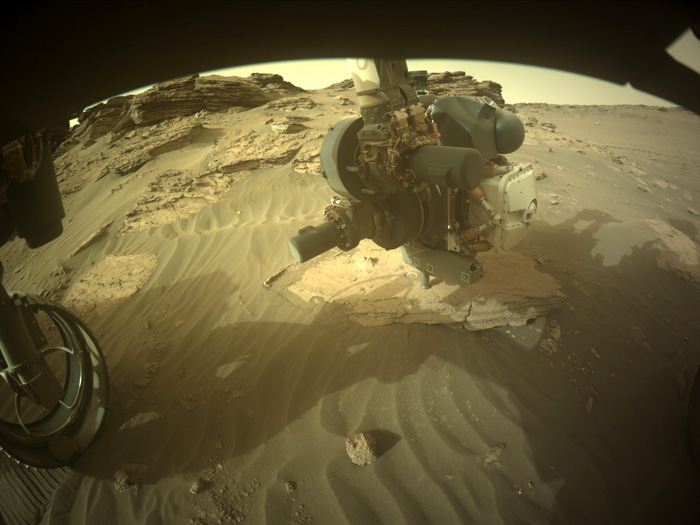 Perseverance has found several objects left over from the landing, including its own parachute, and the Ingenuity helicopter flew over and snapped photos of the smashed backshell.

Worried about all the trash left behind by the rover? Don't be, says our friend and image editing specialist Stuart Atkinson. "In a hundred years or so, Martians will be eagerly collecting up all this stuff and either putting it on display in museums or making it into "historical jewelry", like we do with fossils, amber, and meteorites.

Martian tumbleweed? No. More "stuff" from the Perseverance rover's descent stage or backshell that has been blown close to the rover by the whispering martian wind. If you're worried about this being litter, don't be... pic.twitter.com/VwgO0z0oFO

Find out more about the proposed sample return mission in a recent article on UT by Laurence Tognetti, discussing how Perseverance is currently looking for a good landing site for such a mission.