Insulating states in the superlattice where electrons are placed. (Xu et al., Nature, 2020)

If the density of negatively charged electrons could be maintained below a certain level, the subatomic particles could be held in a repeating pattern to create a crystal of electrons; this idea came to be known as a Wigner crystal.

The first time a Wigner crystal was experimentally observed was in 1979, when researchers measured an electron-liquid to electron-crystal phase transition using helium; since then, such crystals have been detected numerous times.

Getting fidgety electrons to sit still enough to create the crystals is a lot easier said than done, though. Now, a team of physicists has demonstrated a new method - trapping the wiggly little brats between a pair of two-dimensional semiconducting tungsten layers.

Conventional crystals - like diamonds or quartz - are formed from a lattice of atoms arranged in a fixed, three-dimensional repeating grid structure. According to Wigner's idea, electrons could be arranged in a similar fashion to form a solid crystal phase, but only if the electrons were stationary.

If the density of the electrons is low enough, the Coulomb repulsion between electrons of the same charge produces potential energy that should dominate their kinetic energy, resulting in the electrons sitting still. Therein lies the difficulty.

"Electrons are quantum mechanical. Even if you don't do anything to them, they're spontaneously jiggling around all the time," said physicist Kin Fai Mak of Cornell University.

"A crystal of electrons would actually have the tendency to just melt because it's so hard to keep the electrons fixed at a periodic pattern."

Attempts to create Wigner crystals therefore rely on some sort of electron trap, such as powerful magnetic fields or single-electron transistors. In 2018, MIT scientists attempting to create a type of insulator may have instead produced a Wigner crystal, but their results left room for interpretation. 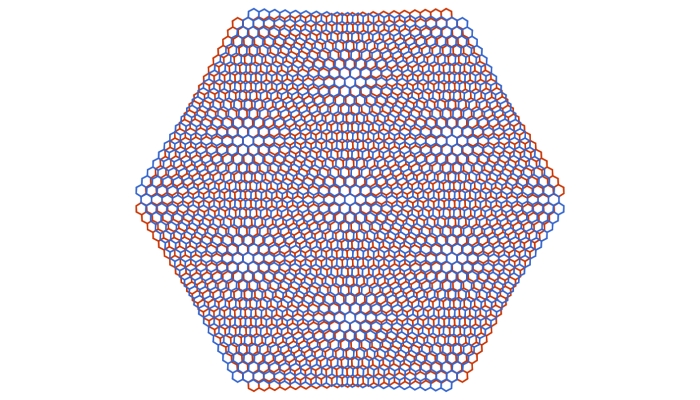 MIT's trap was a graphene structure known as a moiré superlattice, where two two-dimensional grids are superimposed at a slight twist and larger regular patterns emerge, as seen in the example image above.

Now the Cornell team, led by physicist Yang Xu, has used a more targeted approach with their own moiré superlattice. For their two semiconducting layers, they used tungsten disulfide (WS2) and tungsten diselenide (WSe2) specially grown at Columbia University.

When overlaid, these layers produced a hexagonal pattern, allowing the team to control the average electron occupancy at any specific moiré site.

The next step was to carefully place electrons in specific places in the lattice, using calculations to determine the occupancy ratio at which different arrangements of electrons will form crystals.

The final challenge was how to actually see if their predictions were correct, by observing the Wigner crystals or lack thereof.

"You need to hit just the right conditions to create an electron crystal, and at the same time, they're also fragile," Mak said.

"You need a good way to probe them. You don't really want to perturb them significantly while probing them."

This problem was solved with insulating layers of hexagonal boron nitride. An optical sensor was placed very close to (but not touching) the sample, at a distance of just one nanometre, separated by a boron nitride layer. This prevented electrical coupling between the sensor and the sample, while maintaining enough proximity for high detection sensitivity.

This arrangement allowed the team to probe the sample cleanly, and they made their detection. Within the moiré superlattice, electrons arranged into a variety of crystal configurations, including triangular Wigner crystals, stripe phases and dimers.

This achievement doesn't just have implications for studying electron crystals. The findings demonstrate the untapped potential of moiré superlattices for quantum physics research.

"Our study," the researchers wrote in their paper, "lays the groundwork for using moiré superlattices to simulate a wealth of quantum many-body problems that are described by the two-dimensional extended Hubbard model or spin models with long-range charge-charge and exchange interactions."

Editor's note (13 Nov 2020): An earlier version of this article incorrectly implied that this was the first time Wigner crystals have been created and observed. We have corrected this and apologise for the error.