A new way of classifying magnetized plasma has led to the discovery of 10 previously unknown topological phases of plasma.

These exotic excitations could broaden the potential practical uses for magnetized plasma.

"These findings could lead to possible applications of these exotic excitations in space and laboratory plasmas," said physicist Yichen Fu of Princeton Plasma Physics Laboratory (PPPL).

"The next step is to explore what these excitations could do and how they might be utilized."

Recent research has started to consider plasma topologically, that is, studying the shapes of the waves inside it.

However, the topological phases in cold magnetized plasma, and the transitions between them, have not been comprehensively explored. This is important, because it can help us understand how plasma interacts with itself. 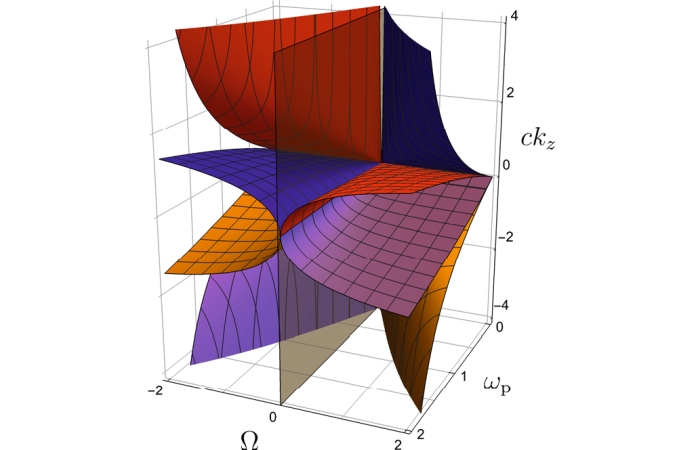 Fu and his colleague, PPPL physicist Hong Qin, sought to mathematically describe the topological phases of a cold plasma in a uniform magnetic field. They found 10 different novel phases, separated by edge modes - the boundary between two topologically different regions within the plasma. Numerical studies verified the pair's findings.

"The discovery of the 10 phases in plasma marks a primary development in plasma physics," Qin said.

"The first and foremost step in any scientific endeavor is to classify the objects under investigation. Any new classification scheme will lead to improvement in our theoretical understanding and subsequent advances in technology."

What those advances might be is not speculated in the paper, but there are some interesting possibilities. Plasma is often called the fourth state of matter, a gas in which electrons have been stripped from the atoms therein, forming an ionized material.

It's abundant in space - in fact, it's the state of matter found in stars, which is key to a potential plasma technology.

Deep in their plasma cores, stars fuse nuclei to form heavier elements, a process that generates vast amounts of energy. Scientists have been working towards plasma fusion here on Earth as a form of energy production that will be clean and practically limitless.

As you might imagine, this is extremely difficult. We need to be able to maintain a stable plasma at temperatures hotter than the Sun for long enough to generate and extract energy. There are many obstacles, and so we're pretty far from that goal - but better understanding plasma can only bring us closer.

This research represents a step in that direction.

"Based on these phases we identify the necessary and sufficient condition[s] for the excitations of these localized waves. As for how this progress can be applied to facilitate fusion energy research, we have to find out."