Now researchers have determined via theoretical modelling that this effect can change the flow of energy particles in a current, so that they move against it.

The area has been well studied by researchers, including one 2011 paper that also demonstrated that the momentum of a photon moving through openings is disturbed when measurements are taken of its position.

This new research, led by Ángel Rubio of the University of the Basque Country and the Max Planck Institute PMSD, concerns the observation of heat and particles in a current.

We all know how current works. It usually flows in one direction - from an upper elevation to a lower one, or from a hotter temperature to a cooler one. But in quantum devices, the team found, the act of observing makes flow in one direction or the other more likely.

"We demonstrate that in a standard thermo-electric nanodevice the current and heat flows are not only dictated by the temperature and potential gradient, but also by the external action of a local quantum observer that controls the coherence of the device," the researchers wrote in their paper.

"Depending on how and where the observation takes place, the direction of heat and particle currents can be independently controlled. In fact, we show that the current and heat flow in a quantum material can go against the natural temperature and voltage gradients."

They found that when a quantum observer measures the system at certain points, it has an effect on the direction of the current. When there is no observer, the heat flows from warmer to cooler, as you would expect. When observed in a certain location, the current's natural flow is amplified. When observed in the opposite location the current changes direction, moving from cold to hot.

Below, you can see an artist's impression of the role of a quantum observer as it would apply to water flow: depending on where the observer is positioned, and what part of the figure is seen, the water will be seen to flow differently. 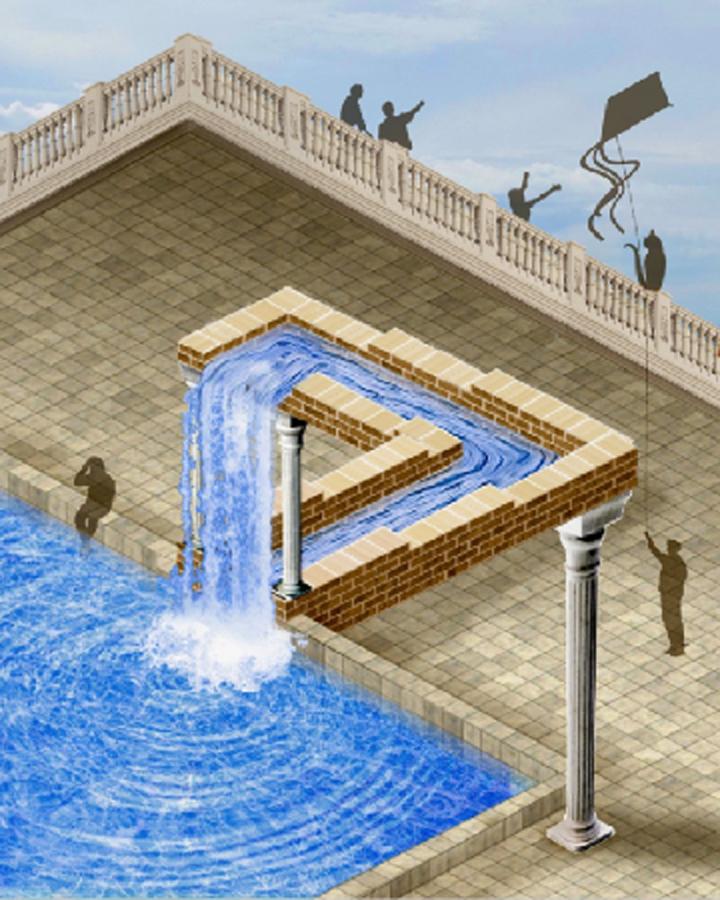 This seems to be a violation of Rudolf Clausius' 1854 statement of the second law of thermodynamics: "It is impossible for a self acting machine working in a cyclic process without any external force, to transfer heat from a body at a lower temperature to a body at a higher temperature."

But, according to Rubio, the model does no such thing.

"What happens is that the fact of looking, of inserting an observer into the system, acts as an obstacle, as if you were to close off the channel in a pipeline through which the water is flowing," he explained.

"Obviously, if the load starts to build up, it would end up going in the opposite direction. In other words, the observer projects the state of the system onto a state that transmits the current or energy in opposite directions."

This discovery could be used for quantum transportation with directional control, with potential applications in nanoscale systems covering fields such as thermoelectrics, spintronic injection, phononics, and sensing.

But that's a long way off - creating the system in the real world will take quite a bit of work.

"We have worked from a theoretical perspective in which we have proposed a simple model and the theory can be easily verified because all the energy and entropy flows are preserved," Rubio said.

"Carrying out this process experimentally would be another matter. Although the type of device that would need to be designed exists, and producing it would be feasible, right now there is no possibility of doing this in a controlled way."

Those quantum particles will just have to keep going the long way around in the meantime.

The research has been published in the journal npj Quantum Materials.