As plants begin to spread across melting permafrost, scientists are growing ever more worried their roots will stir microbes into unleashing vast stores of carbon.

The layer of soil where the presence of plant roots directly affects the local population of microorganisms is known as the rhizosphere. That presence of roots, compared to soil without roots, accelerates microbial production of carbon by up to four times, potentially 'priming' the frozen ground for further thawing.

This mechanism, known as the rhizosphere priming effect (RPE), has been known since the 1950s, and it could have a huge impact on one of Earth's most troubling carbon feedback loops.

Yet today, no climate models include the rhizosphere as a risk factor for melting permafrost - in large part because the data simply doesn't exist.

"It is important to expand the knowledge in this field," researchers wrote in paper from 2017, "as the magnitude and direction of [rhizosphere priming] are not very well understood, and contradicting results have been observed."

For the first time, researchers have now combined high-resolution data on both the spread and depth of key plants growing in Arctic permafrost to determine how much carbon they are actually releasing.

As rising temperatures stimulate further plant growth, the researchers estimate that rhizosphere priming alone enhances the overall respiration of soil microbes by roughly 12 percent. By 2100, that means an absolute loss of around 40 billion tonnes of carbon from northern permafrost.

And that's so not what we were expecting. In fact, it's practically blown a hole in our climate budget.

To keep global warming under the 1.5 °C threshold, scientists have estimated that at a minimum we must keep our carbon emissions to 200 billion tonnes, and currently, 50 to 100 billion tonnes is put aside for thawing permafrost.

These new figures make up a quarter of that budget, which means there are minute and overlooked ecological interactions that we are clearly not taking into account. And those between plants and soil microbes appear to be high on the list. 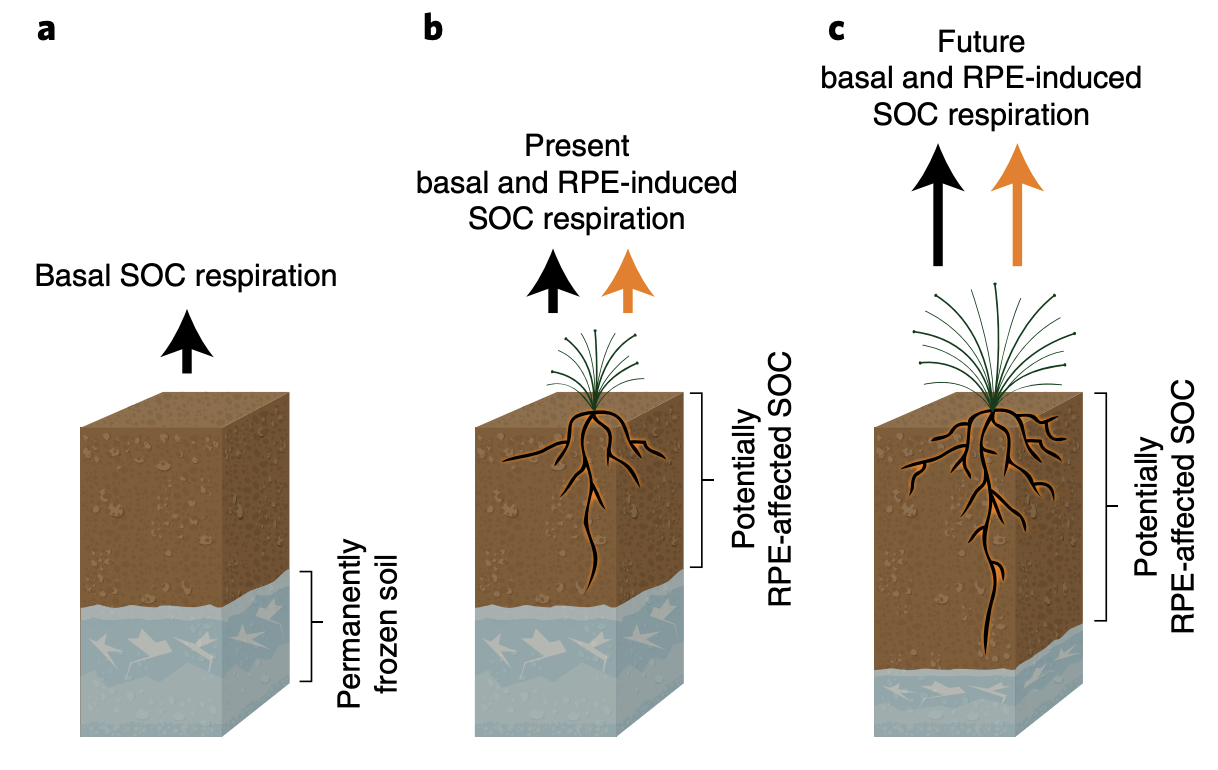 Basing their results on a meta-analysis of plant and soil experiments, researchers say we will have to constrain our emissions much more than we were bargaining on.

In 2019, the world emitted about 43 billion tonnes of carbon dioxide. By 2100, soil microbes munching on sugar produced by newly-formed roots will have unleashed nearly the equivalent of that into our atmosphere.

The authors say they have identified hotspots for RPE losses in boreal forests, including Hudson Bay in Canada and Siberian lowlands, as well as large swathes of eastern Siberia.

We've known about rhizosphere priming since the 1950s, but in all that time we've researched the mechanism very little, and we still don't know how this interaction will change in a rapidly warming Arctic, especially for other greenhouse gases.

Previous studies have shown that the soil which contains the rhizosphere is an important sink for methane, which is even more potent as a global warmer than carbon dioxide, especially over shorter time-frames.

The new study, however, was focused solely on carbon. What's more, it did not explore how soil microbes differ, or if the rhizosphere primes deeper soil beyond their physical reach, possibly through the leaching of minerals and gases.

When permafrost stores as much carbon as all the plants in the world and all the carbon in the atmosphere together, roots are clearly a huge deal, and we need to know more about what they're doing.

Editor's note (19 Aug 2020): This article has been clarified throughout to better reflect the definition of the rhizosphere.