For The First Time, Astronomers See Plumes of Sulfur Dioxide From The Volcanoes of Io

For the first time, astronomers have seen clear evidence of plumes of toxic volcanic gas erupting forth from the volcanoes of Io.

New radio images of the Jovian moon have finally provided some answers to long-standing questions about its atmosphere.

Io is the most volcanic place in the Solar System. More than 400 active volcanoes speckle its surface, the manifestation of the moon's internal stress as it is gravitationally tugged in different directions not just by Jupiter but by the planet's other three Galilean moons.

Io's thin atmosphere and surface are dominated by sulfur dioxide - yes, brimstone - belched from the interior. It spews out as a gas through volcanic splits and maws and settles on the ground at night as it cools, giving the moon its sickly yellow and orange hues.

But just how much of that gas directly comes from volcanoes, versus how much comes from frozen surface sulfur dioxide re-heated in sunlight? That has been difficult to quantify.

"It was not known which process drives the dynamics in Io's atmosphere," said astronomer Imke de Pater of the University of California, Berkeley.

"Is it volcanic activity, or gas that sublimates from the icy surface when Io is in sunlight? What we show is that, actually, volcanoes do have a large impact on the atmosphere."

Researchers finally have some answers, and at the same time have been able to detect plumes of volcanic sulfur dioxide on the moon.

For a world that's constantly leaking volcanic gas, Io's atmosphere is surprisingly thin; most of gas therein escapes through a complex interaction with Jupiter and its magnetic field at a rate of around 1 metric ton per second, contributing to a colossal doughnut of plasma called the Io plasma torus that orbits Jupiter.

The remaining atmosphere can reveal a lot about the geological processes in the moon's interior, which in turn could help us understand some of the dynamics of planets beyond our Solar System.

So, astronomers used the Atacama Large Millimeter/submillimeter Array (ALMA) in Chile to take a closer look at Io under radio wavelengths as it moves in and out of Jupiter's shadow - a Jovian eclipse.

The first thing they found is that sulfur dioxide does not stay in Io's atmosphere. At night, the temperature drops below sulfur dioxide's freezing point.

When that surface reemerges into daylight, the frozen sulfur dioxide sublimates back into the atmosphere, replenishing it in about 10 minutes - much quicker than expected.

This strange quirk turned out to be the perfect tool for studying the volcanic atmospheric contribution.

"When Io passes into Jupiter's shadow, and is out of direct sunlight, it is too cold for sulfur dioxide gas, and it condenses onto Io's surface," explained astronomer Statia Luszcz-Cook from Columbia University.

"During that time we can only see volcanically-sourced sulfur dioxide. We can therefore see exactly how much of the atmosphere is impacted by volcanic activity."

In the ALMA images, the team was able to clearly identify, for the first time, evidence of plumes of sulfur dioxide and sulfur monoxide emitting from volcanic sources.

In volcanic regions with no sulfur dioxide or monoxide, they saw something else - potassium chloride, another volcanic gas.

This suggests that different volcanoes are tapping into different magma reservoirs, rather than sharing them. This suggests some interesting complexity beneath the surface of Io. 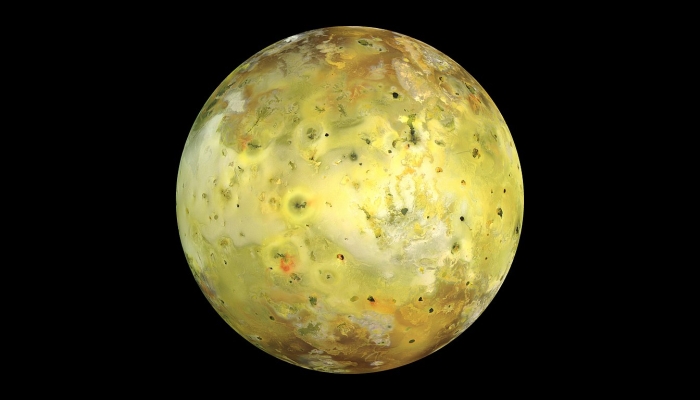 True-colour image of Io taken by the Galileo spacecraft. (NASA/JPL/University of Arizona)

From their images, the team was able to calculate the volcanic contribution to Io's atmosphere. Around 30 to 50 percent of the sulfur dioxide comes directly from volcanoes.

Obviously future work will help narrow that down. The team says that the next step in their research is trying to take the temperature of Io's atmosphere, particularly at low altitudes. This will be somewhat more challenging, but not impossible.

"To measure the temperature of Io's atmosphere, we need to obtain a higher resolution in our observations, which requires that we observe the moon for a longer period of time. We can only do this when Io is in sunlight, since it does not spend much time in eclipse," de Pater said.

"During such an observation, Io will rotate by tens of degrees. We will need to apply software that helps us make unsmeared images. We have done this previously with radio images of Jupiter made with ALMA and the Very Large Array."