One of the oldest and most fundamental questions in biochemistry is why the 20 amino acids that support life are all needed, when the original core of 13 would do – and quantum chemistry might have just provided us with the answer.

According to new research, it's the extra chemical reactivity of the newer seven amino acids that make them so vital to life, even though they don't add anything different in terms of their spatial structure.

Quantum chemistry is a way of taking some of the principles of quantum mechanics – describing particles according to probabilistic, wave-like properties – and applying them to the way atoms behave in chemical reactions.

"The transition from the dead chemistry out there in space to our own biochemistry here today was marked by an increase in softness and thus an enhanced reactivity of the building blocks," says one of the researchers, Bernd Moosmann from Johannes Gutenberg University Mainz in Germany.

It's the job of amino acids to form proteins, as instructed by our DNA. These acids were formed right after Earth itself came into being, about 4.54 billion years ago, and so represent one of the earliest building blocks of life.

However, why evolution decided that we needed 20 amino acids to handle this genetic encoding has never been clear, because the first 13 that developed should have been enough for the task.

The greater "softness" of the extra seven amino acids identified by the researchers means they are more readily reactive and more flexible in terms of chemical changes.

If you were representing the amino acids as circles, they could be drawn as multiple concentric circles representing differing energy levels, rather than one single circle of the same chemical hardness and energy level – kind of like in the photo below. 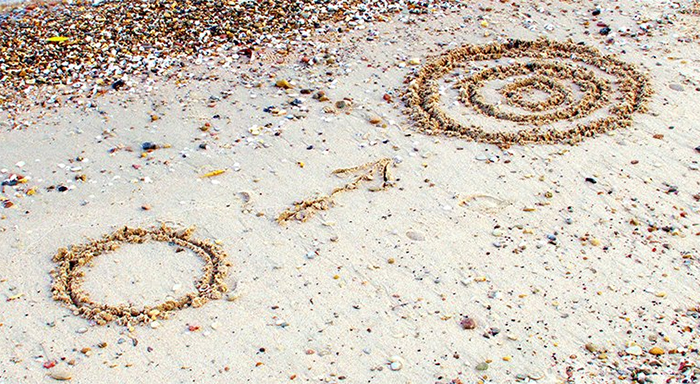 Having determined the hypothesis through quantum chemistry calculations, the scientists were able to back up their ideas with a series of biochemical experiments.

Along the way the team determined that the extra amino acids – particularly methionine, tryptophan, and selenocysteine – could well have evolved as a response to increasing levels of oxygen in the biosphere in the planet's youngest days.

Peering so far back in time is difficult, as the first organic compounds never left fossils behind for us to analyse, but this may have been part of the process that kicked off the formation of life on Earth.

As the very earliest living cells tried to deal with the extra oxidative stress, it was a case of survival of the fittest. The cells best able to cope with that additional oxygen – through the protection of the new amino acids – were the ones that lived on and flourished.

"With this in view, we could characterise oxygen as the author adding the very final touch to the genetic code," says Moosmann.