Quantum entanglement is the binding together of two particles or objects, even though they may be far apart – their respective properties are linked in a way that's not possible under the rules of classical physics.

It's a weird phenomenon that Einstein described as "spooky action at a distance", but its weirdness is what makes it so fascinating to scientists. In new research, quantum entanglement has been directly observed and recorded at the macroscopic scale – a scale much bigger than the subatomic particles normally associated with entanglement.

The dimensions involved are still very small from our perspective – these experiments involved two tiny aluminum drums one-fifth the width of a human hair – but in the realm of quantum physics they're absolutely huge. 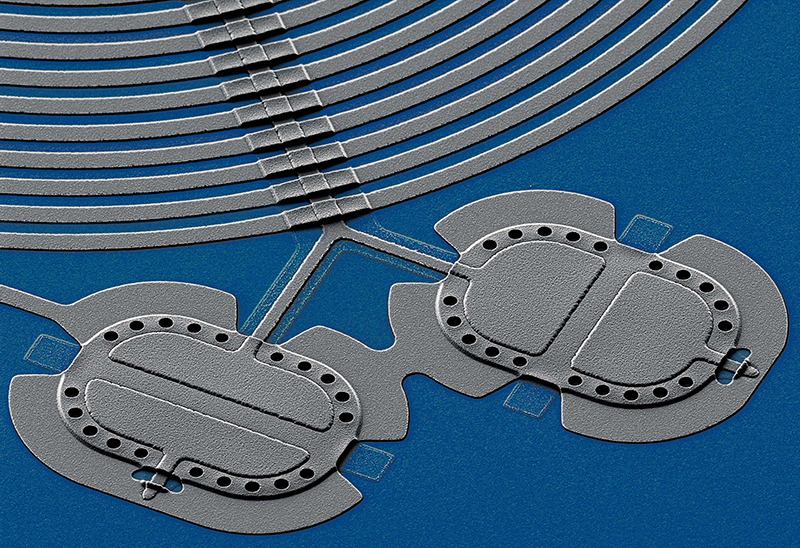 "If you analyze the position and momentum data for the two drums independently, they each simply look hot," says physicist John Teufel, from the National Institute of Standards and Technology (NIST) in the US.

"But looking at them together, we can see that what looks like random motion of one drum is highly correlated with the other, in a way that is only possible through quantum entanglement."

While there's nothing to say that quantum entanglement can't happen with macroscopic objects, before now it was thought that the effects weren't noticeable at larger scales – or perhaps that the macroscopic scale was governed by another set of rules.

This new research suggests that's not the case. In fact, the same quantum rules apply here, too, and can actually be seen as well. Researchers vibrated the tiny drum membranes using microwave photons and kept them kept in a synchronized state in terms of their position and velocities.

To prevent outside interference, a common problem with quantum states, the drums were cooled, entangled, and measured in separate stages while inside a cryogenically chilled enclosure. The states of the drums are then encoded in a reflected microwave field that works in a similar way to radar.

Previous studies have also reported on macroscopic quantum entanglement, but the new research goes further: All of the necessary measurements were recorded rather than inferred, and the entanglement was generated in a deterministic, non-random way.

In a related but separate series of experiments, researchers also working with macroscopic drums (or oscillators) in a state of quantum entanglement have shown how it's possible to measure the position and momentum of the two drumheads at the same time.

"In our work, the drumheads exhibit a collective quantum motion," says physicist Laure Mercier de Lepinay, from Aalto University in Finland. "The drums vibrate in an opposite phase to each other, such that when one of them is in an end position of the vibration cycle, the other is in the opposite position at the same time."

"In this situation, the quantum uncertainty of the drums' motion is canceled if the two drums are treated as one quantum-mechanical entity."

What makes this headline news is that it gets around Heisenberg's Uncertainty Principle – the idea that position and momentum can't be perfectly measured at the same time. The principle states that recording either measurement will interfere with the other through a process called quantum back action.

As well as backing up the other study in demonstrating macroscopic quantum entanglement, this particular piece of research uses that entanglement to avoid quantum back action – essentially investigating the line between classical physics (where the Uncertainty Principle applies) and quantum physics (where it now doesn't appear to).

One of the potential future applications of both sets of findings is in quantum networks – being able to manipulate and entangle objects on a macroscopic scale so that they can power next-generation communication networks.

"Apart from practical applications, these experiments address how far into the macroscopic realm experiments can push the observation of distinctly quantum phenomena," write physicists Hoi-Kwan Lau and Aashish Clerk, who weren't involved in the studies, in a commentary on the new research.

Both the first and the second study have been published in Science.