Researchers have come up with a way we could harvest energy from Earth by turning excess infrared radiation and waste heat into electricity we can use.

The concept involves the strange physics of quantum tunnelling, and key to the idea is a specially designed antenna that can detect waste or infrared heat as high-frequency electromagnetic waves, transforming these quadrillionth-of-a-second wave signals into a direct charge.

There's actually a lot of energy going to waste here on Earth – most sunlight that hits the planet gets sucked up by surfaces, the oceans, and our atmosphere.

This warming leads to a constant leak of infrared radiation that some estimate to be as much as millions of gigawatts every second.

Because the infrared wavelengths are so short, to harness them we need super-tiny antennas. According to the international team of researchers behind the new study, it's quantum tunnelling that could provide the breakthrough required.

"There is no commercial diode in the world that can operate at such high frequency," says lead researcher Atif Shamim from the King Abdullah University of Science and Technology (KAUST) in Saudi Arabia. "That's why we turned to quantum tunnelling."

Quantum tunnelling is a well-established phenomenon in quantum physics where a particle can get through a barrier without having enough energy to do so.

One of the examples used most often is of a ball rolling up a hill: in classical physics, the ball needs a certain amount of energy behind it to get up the hill and over to the other side.

But in quantum physics, the ball can tunnel through the hill with less energy, thanks to the positional uncertainty that's at the heart of everything quantum.

How does this help in the construction of nanoscale antennas? It enables electrons to be moved through a small barrier, via a tunnelling device like a metal-insulator-metal (MIM) diode, turning infrared waves into current along the way.

The scientists were able to create a new bowtie-shaped nanoantenna, sandwiching the thin insulator film between two slightly overlapped metallic arms made from gold and titanium, giving them a device capable of generating the intense electrical fields required for tunnelling to work. 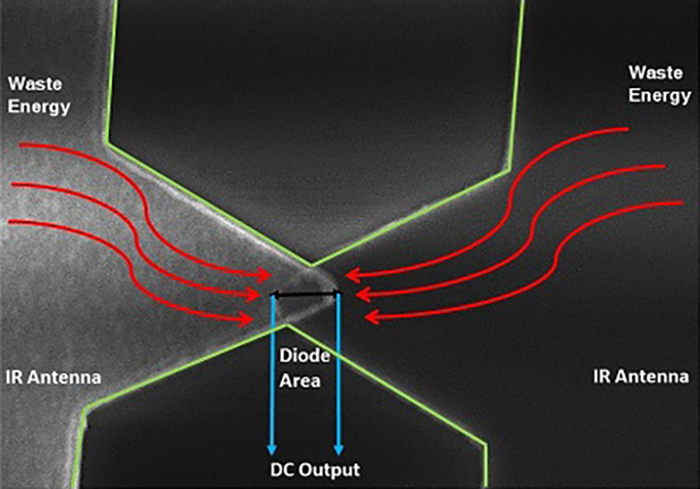 "The most challenging part was the nanoscale overlap of the two antenna arms, which required very precise alignment," says one of the researchers, Gaurav Jayaswal from KAUST.

"Nonetheless, by combining clever tricks with the advanced tools at KAUST's nanofabrication facility we accomplished this step."

The newly created MIM diode was able to successfully capture infrared radiation with zero applied voltage, so it only turns on when needed.

While conventional solar panels can only harvest a small chunk of the visible light spectrum, being able to tap into all that excess infrared radiation as well would represent a revolutionary shift in energy production, a "game changer" in the words of the researchers.

What's more, unlike solar power plants, these energy harvesters could operate around the clock, whatever the weather. Other scientists are working on cracking the same problem from different angles.

Despite the huge promise, for the time being this is just another step along the road to figuring this out, and many technical challenges still lie ahead – currently, the antenna isn't very energy efficient, for example.

"This is just the beginning – a proof of concept," says Shamim.

Eventually, though, the tech could make a huge difference. "We could have millions of such devices connected to boost overall electricity generation," he adds.

The research has been published in Materials Today Energy.