One of the ocean's more mysterious jellyfish has been difficult to study because of its natural habitat in the dark depths of the ocean. But technology is opening up those depths to our curious eyes - which recently led to a 10-minute encounter with the peculiar, tentacle-less Deepstaria enigmatica.

First discovered in the 1960s and described in 1967, Deepstaria enigmatica - named for underwater explorer Jacques Cousteau's submersible Deepstar 4000, and the jellyfish's inscrutability - has only made rare appearances since.

Only a handful of specimens and partial specimens have shown up over the years, and little is known about it - what it eats, how it eats, how it reproduces, how widely it's distributed, and the depths it can tolerate are all mysteries.

But we may be on the cusp of learning these things, thanks to the NOAA's ocean exploration program, and the scientists employing its technology.

In November of last year, a team of researchers remotely operating the NOAA's research submersible Hercules spotted a living D. enigmatica off the coast of San Benedicto Island, in the Pacific Ocean.

They'd attached an ultra-high sensitivity camera - a Canon ME20F SH - safely contained within a glass sphere so that they could retrieve images from the very low-light conditions in the ocean's aphotic zone.

Around 974 metres (3,195 feet) down, in almost complete darkness, they were surprised by the appearance of D. enigmatica drifting by.

"It's barely ever been seen because it's so fragile and it just floats in the midwater."

Unless you're examining it up close, D. enigmatica looks a lot like a plastic bag, with a delicate, thin bell and no visible tentacles. Because most jellyfish use tentacles to catch their prey, Deepstaria has to rely on another method. Its bell is large, and can open up to a metre across, and it's been hypothesised that D. enigmatica is an ambush predator that uses its entire bell membrane to catch upward-moving prey, closing around it like a bag. During their encounter, the team was able to observe what this might look like.

"By approaching a specimen of D. enigmatica with a relatively low light intensity (274 lumens) and utilising a low-light camera, we were able to film the organism with its umbrella open," the researchers wrote in their paper.

It closed up pretty quickly - a motion that could be used for catching prey, and also to help propel the creature through the water.

Whether it was the light or the motion of the ROV that caused the jellyfish to close is unknown, but it seemed content to remain drifting where it was, even bumping up against the glass sphere that housed the camera, allowing the team to get a closer look at the gastrovascular canals that line the bell - its digestive tract.

It's not the first Deepstaria caught on camera. There's only one other member of the genus, Deepstaria reticulum, and it was caught on film in 2012, to much internet consternation because at first nobody knew what it was. The Monterey Bay Aquarium Research Institute released a video - also featuring D. reticulum - to explain a little bit more about the species.

The two seem very similar, but there are some differences - D. reticulum is a deep reddish colour, and has a small cluster of venomous tentacles under its bell, which it spreads wide, like a sheet. So, while observations of it are valuable, it's not reasonable to use them to extrapolate information about D. enigmatica's behaviour. 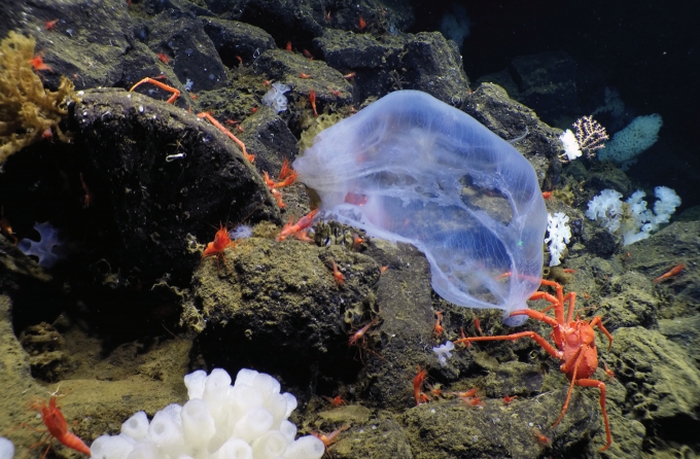 The team made one other interesting observation of the jellyfish on the same expedition: a recently dead specimen on the seafloor, also known as a jelly-fall. These dead jellies provide sustenance to other sea creatures and, indeed, the carcass was attended by feasting crabs and shrimps.

It is, the team noted, the first observation of a D. enigmatica jelly-fall, that they could ascertain.

And it could never have happened without the technology to observe marine creatures in their natural habitat, as non-invasively as possible.

"In recent years, there have been significant advances in both low-light deep-sea imaging technology and soft robotics," the researchers wrote.

These advances show promise in both noninvasive in situ deep-sea observations and delicate collecting techniques for gelatinous zooplankton, and will hopefully lead to the discovery and description of more remarkable meso-bathypelagic organisms, such as Deepstaria."

The research has been published in the journal American Museum Novitates.