Say hello to Gunggamarandu maunala, or the "hole-headed river boss" – the biggest extinct croc yet found in Australia, and an important addition to the jigsaw of crocodylian evolution.

The newly named species, known from a partial skull that was unearthed in Queensland's Darling Downs region, belongs to a group called the tomistomines. Before this, tomistomines had never been found in Australia.

Today, there are only two crocodile species living in Australia: the Australian freshwater crocodile and the Indo-Pacific crocodile (also known as the estuarine or saltwater crocodile). The latter is the largest living reptile in the world, capable of reaching more than six metres in length and weighing more than a tonne.

As impressive as these two species are, there were many more types of crocs in Australia's prehistoric past.

Currently, there are 21 named species of extinct Australian crocodylians spanning the past 66 million years, an era known as the Cenozoic. Of these, 19 belong to a group called the Mekosuchinae, which was found only in Australia and the southwest Pacific.

Mekosuchines came in many shapes and sizes, ranging from less than two metres long to well over five metres, and with diverse snout shapes that indicate different lifestyles and methods of acquiring prey.

Some were semi-aquatic ambush predators similar to today's crocodiles and alligators, whereas others likely hunted on land. The last mekosuchines persisted on a few Pacific islands until they went extinct not long after human colonization.

Crocodylian paleontology in Australia has been particularly active over the past 30 years, especially during the 1990s when many significant discoveries were made. Since then, almost all studies have indicated that the vast majority of extinct crocodylians from Australia were mekosuchines.

This has led to the perception that mekosuchines were the dominant, if not only, crocodylians in Australia, until the relatively recent arrival of true crocodiles (that is, members of the genus Crocodylus) such as the two species that survive today.

A continent represented by just a single group of crocodylians for more than 60 million years is rather unusual. With the exception of Antarctica, all other continents had representatives of more than one crocodylian group at some point of the Cenozoic.

Crocodiles, gharials and alligators still live in Asia today, and the Americas are home to crocodiles, caimans and another species of alligator. Why should Australia be any different?

As it turns out, our new discovery reveals crocs were not as lonely on this continent as we once thought, because Gunggamarandu maunala is Australia's first recorded tomistomine crocodylian.

The name Gunggamarandu maunala is based on words from the languages spoken by the Barunggam and Waka Waka nations in the Darling Downs region. Gunggamarandu translates as "river boss", and maunala means "hole head", in reference to the large openings on the top of its skull that served as sites for attachment of large jaw muscles.

Tomistomines are yet another group of crocodylians with a long fossil record, spanning more than 50 million years. Except for Antarctica, Australia was the only other continent where fossil remains of tomistomines had never been found.

With the discovery of Gunggamarandu, Australia is now officially a member of the "once inhabited by tomistomines" club.

Today, there is only one living species of tomistomine in the world, the so-called false gharial, which lives in fresh water on the Malay peninsula and some Indonesian islands. One of the most obvious characteristics of this species, and its extinct relatives, are their long, slender snouts. 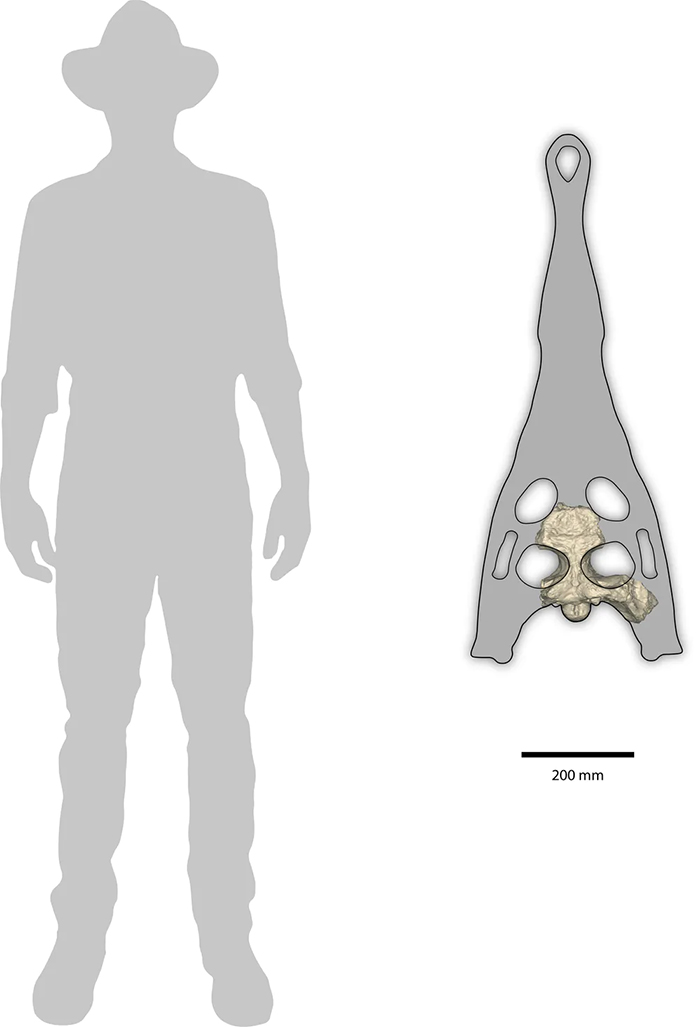 An Australian croc… from Europe?

The discovery of a new crocodylian species is exciting in its own right, but the significance of our study doesn't end there. As the first known tomistomine from Australia, Gunggamarandu proves that crocodylians on this continent were more diverse than we realised.

The region where Gunggamarandu was discovered – the Darling Downs – is the southernmost locality for any tomistomine in the world.

It's not possible to tell exactly how big G. maunala was, because all we have so far is a partial skull. But the proportions of the fossil suggest it is the largest known extinct croc from Australia.

What's more, CT scans of the skull allowed us to digitally reconstruct the brain cavity of the animal, resulting in the most detailed look of these anatomical features for an extinct tomistomine yet. 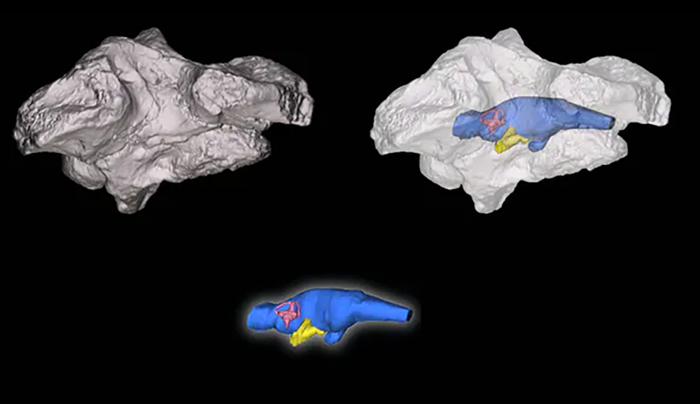 All of these are exciting discoveries. But arguably our most surprising finding regards the ancestry of Gunggamarandu. It is most similar to tomistomines that lived in Europe more than 50 million years ago, despite the fact G. maunala is between five million and two million years old.

This implies a "ghost lineage", stretching some 50 million years into the past, linking the European and Australian tomistomines. It also suggests that more tomistomines, closely related to Gunggamarandu, may await discovery in Asia.

Exactly when tomistomines arrived in Australia is unclear, but the marine barrier between Southeast Asia and Australia would have been sufficiently small to cross for a crocodylian from at least 25 million years ago.