Inked skin never looks as crisp, as vibrant, as those first few months after it's healed.

Except, perhaps, in rare cases like the one discussed recently on Reddit, where a burn revealed a fresh look for an old tattoo. If it is legit - and it could well be - we seriously don't recommend it for rejuvenating your tired-looking tribal.

A photograph of a 'friend of a friend's' hand posted by Reddit user uhmodijia has sparked a firestorm of debate as posters pitched in with their two cents on whether it was bullshit or medical marvel.

The image shows a section of damaged skin – a relatively minor injury caused by a kitchen burn, according to the poster – over an old tattoo of a blue rose, peeling away to show colour so bright, it could have been injected moments ago. 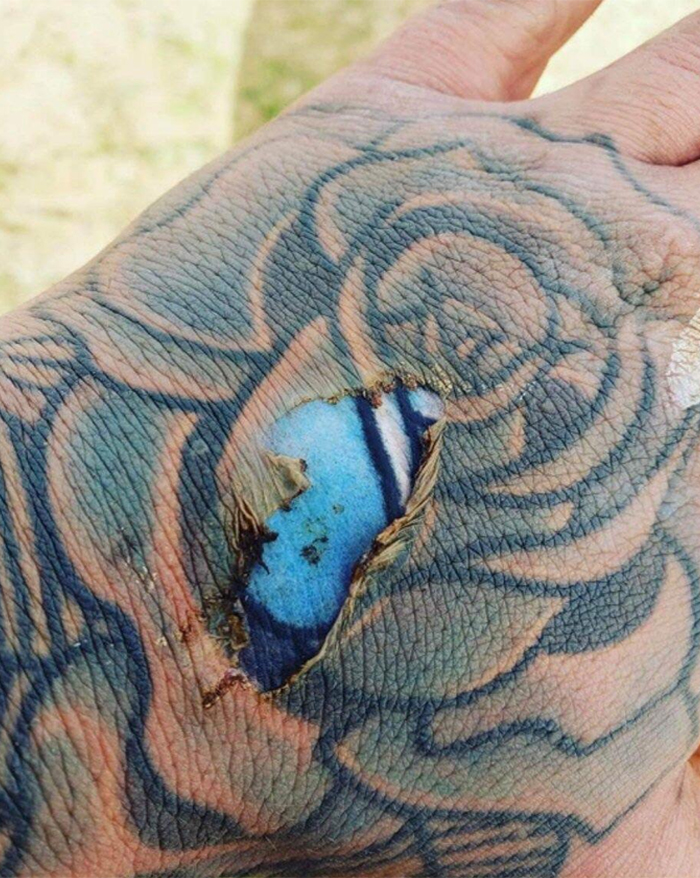 "Now you just have to get rid of the rest of that pesky skin and you will have a beautiful tattoo again!" says MolotovGirl91 (possibly with their tongue firmly in the cheek).

Look, we don't offer medical advice here at ScienceAlert. Although some of our staff have a collection of wicked ink, none of us are trained tattooists either. But we're still going to make this crystal clear – with no disrespect to MolotovGirl91, this isn't sage advice.

Obviously, you'd risk serious infection, pain and scarring if you decided to peel some skin off the old tramp stamp you had inked when you were nineteen.

More importantly, though - is what we're seeing in the photo even possible?

The science behind tattooing might help point the way to whether we can dismiss this as a Photoshop job or entertain it as a 'maybe'. And it's a good opportunity to reflect on recent research.

A typical permanent tattoo is made of a dye that gets poked under the dead upper layers of skin, where it pools among the extracellular matrix of living tissues. Meanwhile, the trauma of the injecting process kicks the body's immune system into action, sending white blood cells rallying to the site.

These cells, called macrophages, gobble up the particles of dye before settling down for a long sleep. We used to think that it's thanks to the extended lives of these white blood cells that tatts don't grow out with your skin or completely dissolve over time.

But relatively recent research has found macrophages do actually die off over time. Only as they do, other white cells step in to pick up their discarded drop of dye so quickly, the ink stays in place, in what is essentially a game of pass-the-parcel.

Still, there's no denying that tattoos do fade over time. So what's going on -  is it the ink losing vibrancy as sunlight breaks apart the dye? Is it a loss of macrophages? Skin growing over the top?

Coloured tattoo inks are typically salt compounds based around different metals. In the case of this picture, it would likely be copper for the splendid blue tinge in the rose, and lead or titanium for its white parts.

Breaking these pigments down in significant quantities usually requires some pretty intense light resulting in super high temperatures, so it hasn't been reported under the kind of UV you get with sunlight exposure.

That said, a 2015 study did find carbon nanoparticles from the decay of black tattoo ink could move around the body, as discovered in the lymph nodes of a woman who had been diagnosed with cervical cancer.

While we can't rule out a proportion of coloured pigments disintegrating over time or under sustained sunlight, it probably doesn't account for most of the colour change in a tattoo. The ageing macrophages could be leaking some ink, too - but there's not enough research on this effect just yet.

But as layers of blemished skin grow over an old tattoo, it's not unreasonable to assume they'll add a translucent veneer that contributes to a well-worn appearance, much like the yellowing of an old painting under varnish.

Therefore, just as pigments in old paintings appear relatively fresh beneath their shell of aged lacquer, ink from a tattoo could theoretically look as vibrant as the day it was injected under those layers of protective skin.

Of course, that's not to say the picture is 100 percent legitimate, or if a bit of a colour touch up was added to make it a little more exciting, so keep that in mind. But there is one other aspect that makes this photo more plausible than you'd think at first.

As another Reddit user pointed out, this sort of 'tattoo refreshment' has actually been seen on… dead people. When a body decomposes, it goes through a process called skin slippage, in which the top layer of the skin becomes loose and sloughs off. (Yes, you can Google photos of this effect on tattoos, and no, we can't recommend that.)

One thing is for certain - freshening up old ink by burning away your skin is not a good idea, even if it might give you such a vivid result.