Researchers Have Found 400-Year-Old False Teeth, And They're Incredibly Creepy

Researchers in Italy have found a 400-year-old dental prosthesis that consists of five teeth from different individuals – set in the wrong order – held together with gold.

While that sounds pretty disturbing – after all, who wants someone else’s teeth in their mouth? – the false teeth were remarkably advanced for the time, employing gold band technology to hold the wonky set together for the duration of the owner’s life.

Even though early sketches of similar types of dentures have been found dating as far back as the 7th century BC, this is one of the oldest and most complete set of false teeth researchers have ever found.

The teeth were found inside the monastery of San Francesco in Lucca, Italy, which houses two large stone tombs that hold the remains of the Guinigis family – an extremely powerful and influential family who ruled the city in the early-1400s.

Since the tomb contains roughly 100 sets of human remains, the team was unable to find which jaw the false teeth belonged to, making it difficult to accurately date the artefact.

But based on rock layer analysis, they think the false teeth were created and worn sometime in the 1600s.

Many of the people buried in the tomb, who reportedly lived over the ripe old age of 40, had dental issues that, in today’s world, would warrant tooth extraction and false teeth.

"Among the aristocratic Guinigis, the presence of cavities, periodontitis, and missing teeth was more than double compared to the Tuscan rural population," team leader Simona Minozzi from the University of Pisa told Rossella Lorenzi at Discovery News.

So, how did 17th-century dentists even make such a devise? Well, step one is finding some spare teeth.

But besides knowing that the teeth came from different individuals, no one is quite sure how they were harvested.

The prosthesis consisted of three central incisors and two lateral canines, which all had their root apex cut off, removing the part that actually grow of the jaw, leaving only the visible part of the tooth for the device.

"The teeth were then aligned and a subtle golden lamina was inserted into the fissure," the team writes. "Micro-CT scan revealed the presence of two small golden pins inserted into each tooth crossing the root and fixing the teeth to the internal gold band." 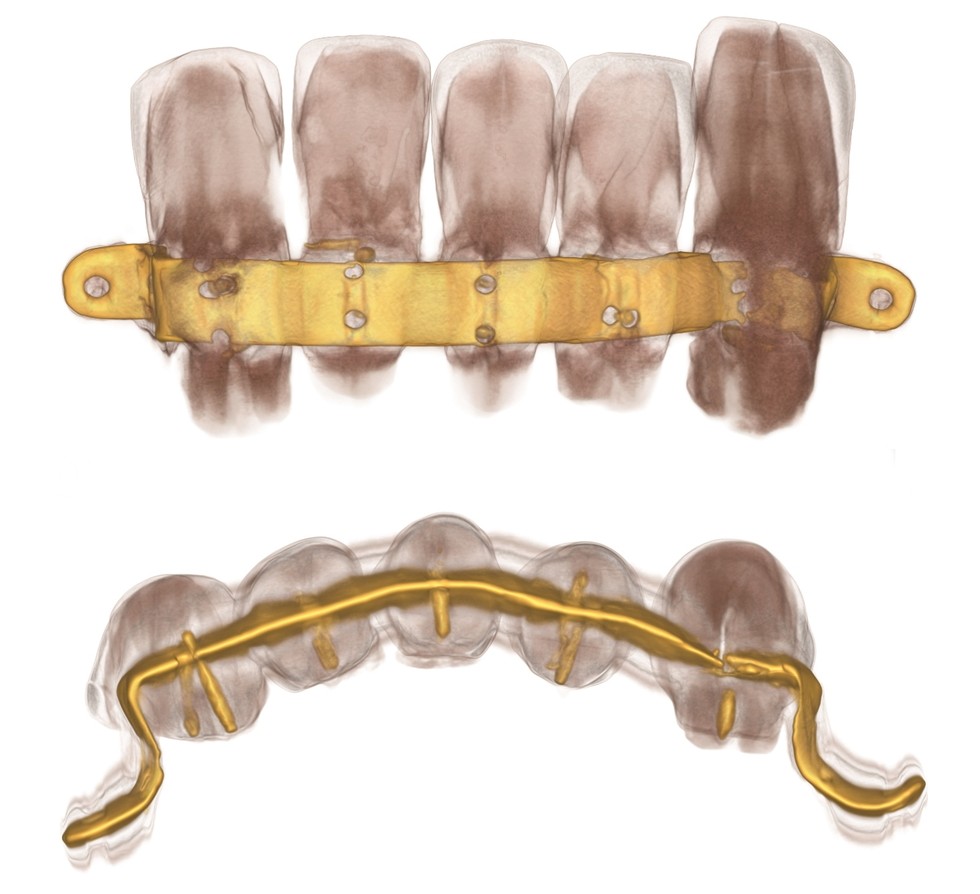 Once inserted into the wearer’s mouth, the device was held in place by two S-shaped tips and string that firmly kept the teeth from constantly falling out.

Though the device seems extremely primitive given the dental technology employed today, it’s the only device found from the time period that uses a gold band to keep everything together, something that, before now, researchers only found written evidence of.

"Although there are descriptions of similar objects in texts from the period, there is no known archaeological evidence," they write.

"The dentures found in the tomb are the first example of dentures from this historical period, and as such are a valuable addition to the history of dentistry."

The team also found that the teeth and gold band had calculus deposits – better known as tartar – on them, suggesting that the person who used them had them for quite a long time.

The find shows just how far dentistry has come over the last couple of hundred years, and while a remarkable number of us still fear getting even routine procedures done, we should all be thankful that we know we’re never going to leave the dentist office with someone else’s teeth in our mouths.

The team’s work was published in Clinical Implant Dentistry and Related Research.