Researchers Have Reconstructed The Brain of The Extinct Tasmanian Tiger

The last Tasmanian tiger in the world died in an Australian zoo in 1936. But scientists have now used imaging technology to reconstruct the species' brain for the first time, revealing new insight into the behaviour of the unique and iconic creatures.

Tasmanian tigers (or thylacines) were carnivorous marsupials that were native to Tasmania - the island off the south coast of Australia. And the new scans show they had a very different brain structure to anything else we've studied so far.

The thylacine (Thylacinus cynocephalus) was a pretty unique creature - it was roughly the size of a large dog, with tiger-like stripes running down its back, and an abdominal pouch that was found on both males and females.

By the 20th century, the species had died out on the Australian mainland as a result of hunting and habitat loss, but was still found on the island of Tasmania.

But thanks to a bounty scheme that was put on thylacines between 1830 and 1914 in order to stop the marsupials hunting livestock, by 1936 the species eventually became extinct even on the island.

As a result, we know very little about its behaviour. Here's some footage of the last living thylacine:

The only records of this apex predator are stories passed down by hunters or farmers, which means zoologists are missing an important piece of the puzzle when they try to understand the evolution of Australian wildlife.

So a team of US and Australian scientists from the University of New South Wales (UNSW) used 3D imaging technology to recreate the animal's brain.

The researchers studied two of the four remaining thylacine brain specimens left in the world: one taken from the Smithsonian Institute, and the other from the Australian museum, both of which were around 100 years old.

To get an idea of what these brains once were like, they used magnetic resonance imaging (MRI) and diffusion tensor imaging (DTI).

Once the team had recreated the neural connections of the thylacine brain, the researchers then compared it to the brains of Tasmanian devils, which are now the main native predators on the island. 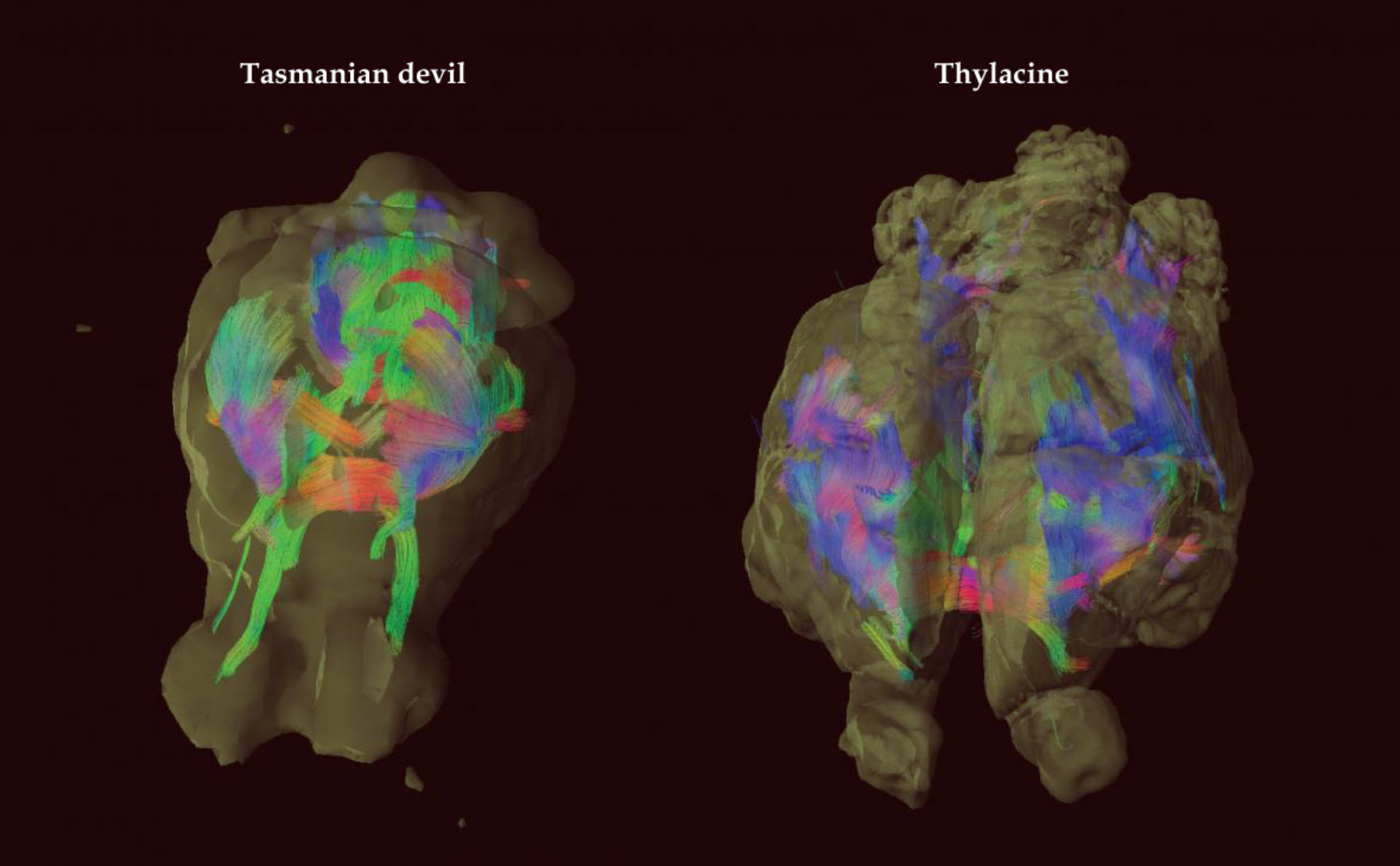 They found that thylacines had larger caudate zones than Tasmanian devils, which suggests that they devoted more of their cortex to complex cognition - which means planning and decision making.

That fits in with what we know about the two animals - while Tasmanian devils are scavengers that feed on whatever they find lying around, Tasmanian tigers were hunters, and planned out their kills.

"The natural behaviour of the thylacine was never scientifically documented," said lead researcher Greg Berns, from Emory University in Georgia.

"Our reconstruction of its white matter tracts, or neural wiring, between different regions of its brain is consistent with anecdotal evidence that the thylacine occupied a more complex, predatory ecological niche versus the scavenging niche of the Tasmanian devil."

Here are the different regions highlighted between the two species (CD stands for caudate): 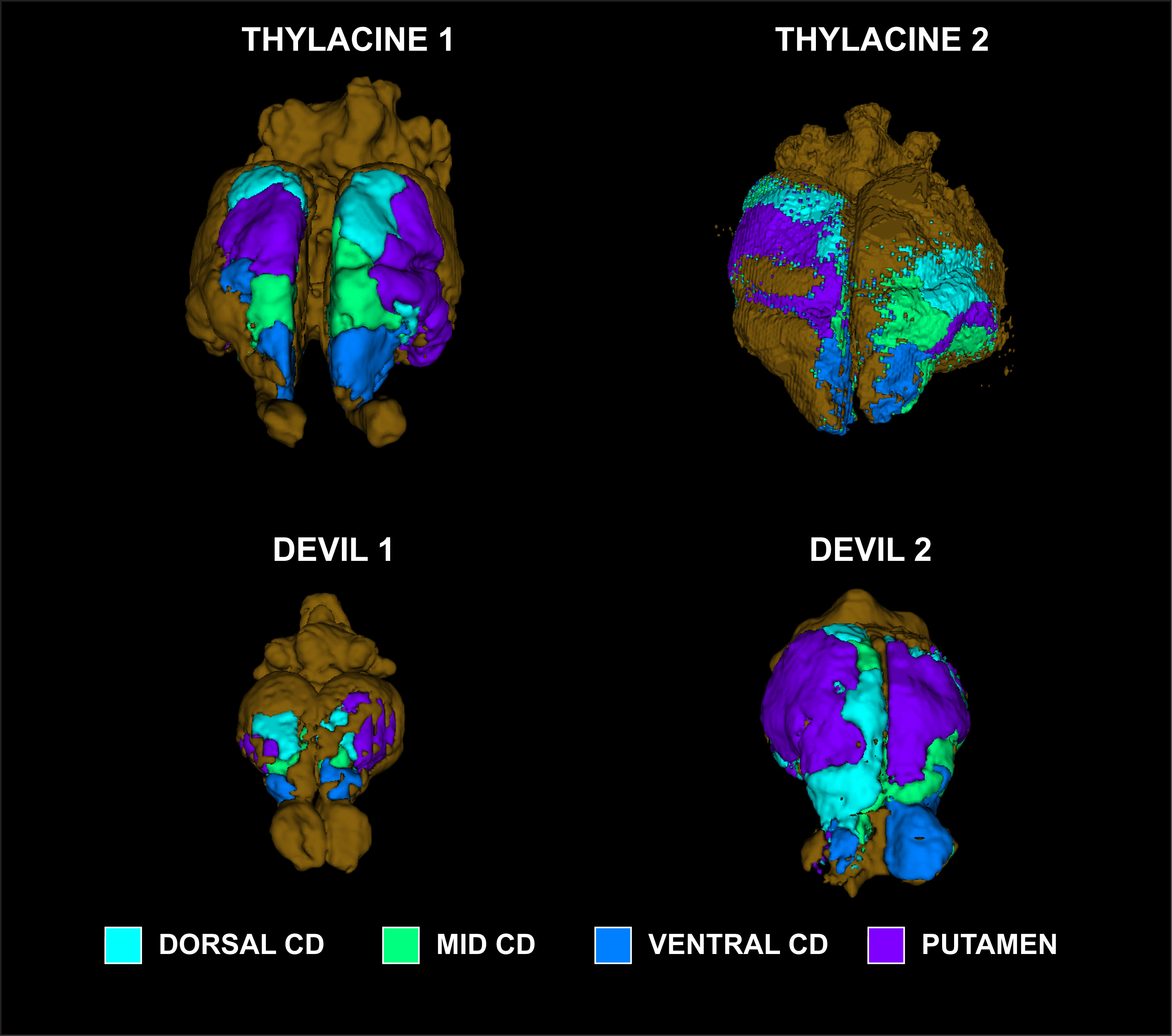 The findings also backed up previous hypotheses proposing that as their brains became larger, they become more modularised.

Interestingly, despite how similar Tasmanian tigers look to dogs, the research also showed that their brains weren't alike.

"The thylacine appears to be an example of convergent evolution, filling a similar niche that members of the canid family did elsewhere," said Berns.

“It’s interesting, however, that the thylacine brain is very different than the canine brain, despite the physical resemblance of their bodies."

The hope is that these reconstructions might help scientists understand more about the evolution of the marsupial brain - something that's still poorly understood.

Marsupials split off from other mammals around 65 million years ago, so understanding the differences and similarities in their brains could reveal some fascinating insight into the evolution that happened over that time.

To aid that process, Bern has created a resource called BrainArk, a digital archive of megafauna (or large mammal) brain scans that's open access. In addition to the thylacine and Tasmanian devil brains, the resource also contains brain scans of dolphins.

"We know a lot about the brains of primates and rats, but there are a lot of other animal brains out there that no one has looked at in any kind of detail," Bern told John Pickrell over at Australian Geographic.

"The Brain Ark is going to fill that gap. We are living in a time when much of the planet's megafauna is at risk for extinction."

The research has been published in PLOS ONE.