Australian researchers have reconstructed the face of an ancient Egyptian mummy, using a 3D printer to create a replica skull and forensic sculpting techniques to bring it to life.

While the sculpture is awesome in its own right, and allows us to get a glimpse into an ancient culture, the team says the reconstruction will also teach students about diagnosing pathologies in former populations.

"The idea of the project is to take this relic and, in a sense, bring her back to life by using all the new technology," said team member Varsha Pilbrow, from the University of Melbourne.

"This way she can become much more than a fascinating object to be put on display. Through her, students will be able to learn how to diagnose pathology marked on our anatomy, and learn how whole population groups can be affected by the environments in which they live."

The funny thing is that the mummy - which is just a wrapped head with no body - was found by accident inside the university's collections area where a curator was performing an audit.

The team suspects the head might have been brought to the university by Frederic Wood Jones, an archaeologist turned anatomy professor, who taught there in the early 1900s.

"Her face is kept upright because it is more respectful that way," said museum curator Ryan Jefferies. "She was once a living person, just like all the human specimens we have preserved here, and we can't forget that."

The decision to reconstruct the face was prompted when Jefferies grew concerned that the skull was starting to rot from the inside. This is a unique problem, because the team can't unwrap the mummy to check if everything is okay, and risk further damaging the specimen.

Instead, they used a CT scan to see what was going on inside. "The CT scan opened up a whole lot of questions and avenues of enquiry and we realised it was a great forensic and teaching opportunity in collaborative research," Jefferies said.

To help reconstruct the face based on what they now knew of the skull, the researchers called in a team of forensic experts from Monash University.

Based on the CT scans of the skull, the Monash team estimated that the head once belonged to a woman - who the team has named Meritamun - who likely lived around 300 BC.

There's still a lot to learn about the exact timeframe through radiocarbon dating, though, which will hopefully get underway soon.

With the CT scans, imaging specialist Gavan Mitchell was able to use a 3D printer to create an exact replica of the skull:

With that, the team turned the skull over to Jennifer Mann, a forensic sculptor, who painstakingly reconstructed the mummy's face using clay and all of the data gathered by the forensic team.

"It is incredible that her skull is in such good condition after all this time, and the model that Gavan produced was beautiful in its details," Mann said. "It is really poignant work and extremely important for finally identifying these people who would otherwise have remained unknown."

The end result was a completely reconstructed face that offers a unique way to see an ancient Egyptian: 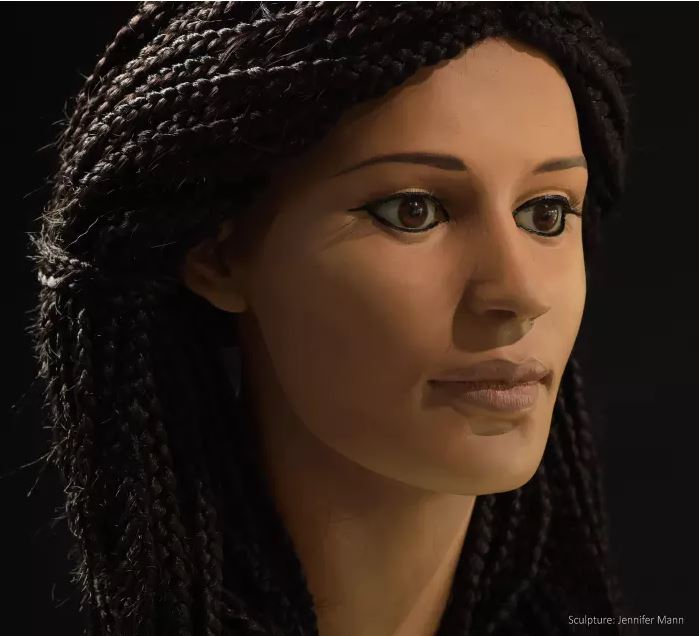 The team's work has yet to be published in a peer-reviewed journal, so the technique awaits proper scrutiny, though publication will likely be forthcoming after more analysis is done on the head using radiocarbon dating techniques.

Check out the video below to see the reconstruction in action: