Scientists Rank 9 Recreational Drugs From Safest to Most Dangerous

A 2017 Global Drug Survey (GDS) covering hundreds of thousands of people around the world has ranked recreational drugs from the safest to the most dangerous, based on how many hospital admissions they lead to.

Turns out, 'magic' mushrooms are responsible for the lowest percentage of emergency ward visits, followed by cannabis in second place, and LSD and cocaine in joint third place.

At the other end of the chart, methamphetamine, synthetic cannabis, and alcohol carried the most risk of a trip to the local emergency ward, leaving MDMA (ecstasy) and amphetamines in the middle of the drug safety table.

The survey took in responses from 115,523 people across more than 50 countries. Nearly 10,000 participants said they had tried magic mushrooms in the past year, with 0.2 percent of those needing a trip to the hospital after their drug-induced trip.

That was the lowest percentage figure in the survey by some distance, but researchers are keen to point out that no drug use is entirely harmless - and there are plenty of other risks associated with drugs that don't necessarily land you in hospital. 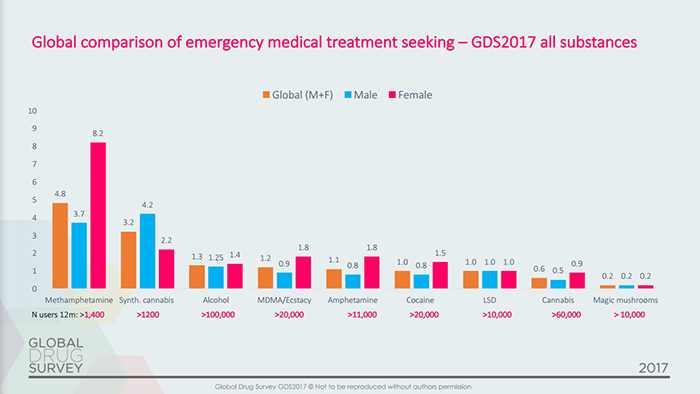 "Combined use [of mushrooms] with alcohol and use within risky or unfamiliar settings increase the risks of harm," the founder of the Global Drug Survey, addiction psychiatrist Adam Winstock, told Olivia Solon at The Guardian.

According to Winstock, accidental injury, panic, short-lived confusion, disorientation, and fears of losing one's mind are the most common reasons that magic mushroom users head to the hospital.

In fact, the greatest risk with taking mushrooms is picking the wrong type and getting poisoned, Winstock added, saying if you're determined to take a trip, you should choose a safe place with people you trust, and mushrooms you know aren't harmful.

Overall, the hospital visit score card looks like this:

Numbers were averaged out across genders, but in most cases, females were found to be at a greater risk.

Since 1999, the Global Drug Survey has been aiming to "make drug use safer regardless of the legal status", which means keeping drug users, healthcare professionals, and policy makers informed about the potential effects of these substances.

If you're going to take one of these drugs, it's vital that you know what you're letting yourself in for - there's no room for complacency, says the GDS team, even with relatively safe recreational drugs.

Being informed includes knowing how long the effects can last. LSD can affect the body for up to 12 hours, whereas cannabis effects will only last a couple of hours.

The authors behind the report don't condone the use of illegal drugs, but say they're hoping to raise awareness of the do's and don'ts for each type of substance, and cut those hospital admission numbers down.

"People don't tend to abuse psychedelics, they don't get dependent, they don't rot every organ from head to toe, and many would cite their impact upon their life as profound and positive," Winstock told The Guardian.

"But you need to know how to use them."

You can read a summary of the report on the Global Drug Survey website.

A version of this article was first published in May 2017.