Marijuana Is Much Safer Than Alcohol And Tobacco, New Study Finds

A new study has quantified the risk of death associated with an array of legal and illegal drugs to find that alcohol was the deadliest of them all, followed by heroin and cocaine. Marijuana, on the other hand, was associated with the lowest risk of death. The study even suggests that we've been overestimating how dangerous it is, which means it's even safer than we thought.

The study, led by food chemist and toxicologist Dirk W. Lachenmeier, from the Chemical and Veterinary Investigation Laboratory of Karlsruhe in Germany, figured out the mortality risk associated with a range of substances by comparing each of their lethal doses with the typical amount used. They refer to this ratio as the 'margin of exposure' (MOE), which can be used to measure how likely a user is, on average, to unwittingly overdose on their drug of choice.

Here's what they found, as reported by Christopher Ingraham at The Washington Post, who says weed came out roughly 114 times less deadly than alcohol, according to the margin of exposure: 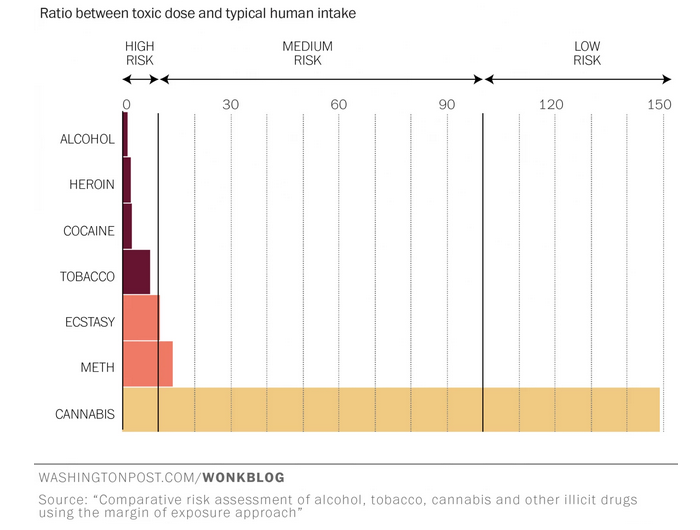 In fact, of all the drugs analysed, marijuana was the only one that could be classified as having a 'low mortality risk', while alcohol and tobacco were classified as 'high risk' substances.

As Sean O'Kane notes at The Verge, these classifications are based solely on the substances themselves, and do not take into account the environmental risk factors associated with some of them. For example, we shouldn't take this to mean that moderate alcohol use is more risky than regular heroin use, he says, because factors such as dirty needles were not considered in the scope of this study.

While previous studies have also found marijuana to be the safest recreational drug - in terms of risk of death - this is the first study to conclude that that the danger of marijuana use is being overestimated. The team reports in the journal Scientific Reports:

"Many governments in Europe have favoured more restrictive policies with respect to illicit drugs than for alcohol or tobacco, on the grounds that they regard both illicit drug abuse and related problems as a significantly larger problem for society. Drug rankings can therefore be useful to inform policy makers and the public about the relative importance of licit drugs (including prescription drugs) and illicit drugs for various types of harm.

"Our MOE results confirm previous drug rankings based on other approaches. Specifically, the results confirm that the risk of cannabis may have been overestimated in the past. At least for the endpoint of mortality, the MOE for THC/cannabis in both individual and population-based assessments would be above safety thresholds (e.g. 100 for data based on animal experiments). In contrast, the risk of alcohol may have been commonly underestimated."

The team suggests that, based on these findings, governments around the world should be focussing their efforts more on mitigating the dangerous effects of alcohol and tobacco rather than on illicit drugs, because chances are, it'll save more lives. They add that the strict legislations associated with marijuana in many countries around the world don't add up when you consider its low risk classification in their study. In fact, they say that an analysis of government classifications of drugs "were often found to lack a scientific basis", and only in the last 10 years have they begun to be based on scientific, rather than anecdotal, evidence.

Of course, this study is only looking at death, specifically, as a risk associated with marijuana. It's not saying that the drug is completely safe, or that it shouldn't be regulated, because while it might be hard to die from using it, there are studies  that suggest you risk developing certain mental health issues, and other disorders in doing so.

As Christopher Ingraham points out at The Washington Post, basically everything you put in your body, whether it's sugar, salt, or heroin, comes with associated risks. What's inconsistent is the way governments around the world try to mitigate these risks through regulation.