It's compact, bushy, and responsible for telling other neurons to shush. Beyond that, nobody is entirely sure what a newly discovered variety of brain cell called a rosehip neuron does.

What makes this finding particularly intriguing is that so far the neuron has only been discovered in humans.

That could quickly change now that we know what to look for in other species, of course, but for now it's a reason to pause and rethink how we apply animal models in neurology.

A collaboration between teams of researchers identified this unusual cell in brain tissues donated by two male adults while cataloguing cells based on their anatomical and genetic fingerprints.

Interestingly, the initial findings were made twice by two different groups of researchers, each stumbling on the cell through a different method. Rather than compete, the two joined forces to analyse their discovery.

Samples were taken from 'Layer 1' of the neocortex – the wrinkled outside part of the brain that is responsible for turning sensations into perceptions and carrying out a variety of other highly complex tasks.

Stained and observed under the microscope, these cells do look a little odd. They appear rather compact with a bushy shape, reminiscent of a rose with its petals removed according to some of the study's researchers.

But it was the profile of proteins coating the neuron's membranes that labelled them as a distinct cell type, one that not only hasn't been seen in humans until now, but has no known equivalent in the heavily scrutinized mouse nervous system either.

Looking at the position, anatomy, and genes activated by the cells allowed the researchers to categorise them into 10 subtypes of what's called a GABAergic interneuron.

These cells are the traffic lights of our brain, standing at crossroads and responding to the neurotransmitter gamma-Aminobutyric acid by exciting or blocking incoming signals.

Layer 1 in the neocortex isn't exactly packed with nerve cells. But those that it does possess are well connected with fibres stretching near and far throughout the brain.

It's seeming as if rosehip neuron subtypes make up roughly 10 to 15 percent of all inhibitory neurons in Layer 1 – not a lot, and probably only get rarer throughout the rest of the brain.

Putting it all together, the positions and structures of these newly discovered rosehip neurons suggest they play some kind of high precision role in blocking signals from excitatory cells called pyramidal cells found in a deeper layer of the neocortex. 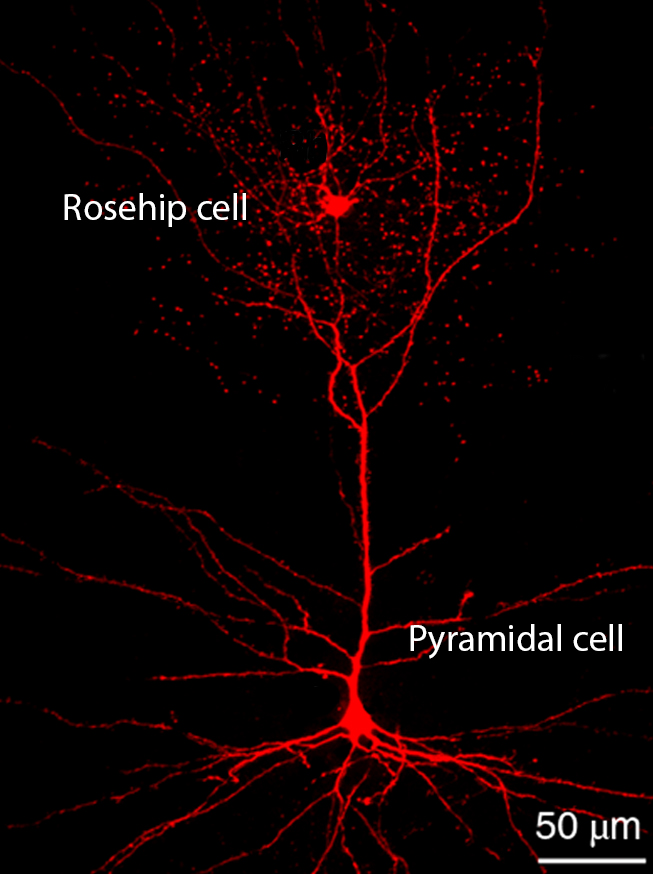 "We all have inhibitory neurons and excitatory neurons," neuroscientist Trygve Bakken from the Allen Institute for Brain Science told Andréa Morris at Forbes.

"But this particular type of inhibitory neuron is what's new in this study. It's special based on its shape and its connections and also the genes that it expresses."

This could potentially make them an important control mechanism in a part of the brain we tend to think of as rather human-like. The fact we've never seen them in mice might help us better understand key differences in our species.

Further research could yet identify them in other primates, or any other animals for that matter. Given what little we know right now, a great deal of this is speculative.

But any time we find a major difference in neurological structure or function between our brains and those of mice, an important animal model we rely on for study, we have a good reason to sit up and take notice.

Thanks to the ease with which they can be raised, their quick breeding cycles, and short life times, mice make for a good starting point in neurological studies.

The more we understand about how their brains diverge from ours, and which neurological traits are conserved, the more accurate our conclusions become.

The next step for the researchers will be to develop precise maps showing how rosehip neurons are organised in connection with pyramidal neurons.

Pinning down the intricate details of our brain's circuits could show us how the brain works on a fundamental level, and maybe even help us identify what happens when it doesn't work quite as desired.

This research was published in Nature Neuroscience.