The sprawling ruins of Amazonian settlements once home to an Indigenous agriculturalist society with a penchant for cosmology have been uncovered in the Bolivian jungle, hidden beneath seemingly impenetrable vegetation.

The 26 sites, roughly half of which were previously unknown to archaeologists, are yet another example of how the Amazon region was home to large, longstanding settlements and complex ancient societies before the Spanish invasion decimated the Americas.

"Our results put to rest arguments that western Amazonia was sparsely populated in pre-Hispanic times" and enrich existing evidence that the Casarabe culture had a "highly integrated, continuous and dense settlement system," write archaeologist Heiko Prümers of the German Archaeological Institute and colleagues in a new study.

Using remote laser scanners mounted on helicopters, the team of mostly European archaeologists scanned six areas in the heartland of the ancient Casarabe culture that developed between AD 500 and 1400 in what is now northern Bolivia.

The sprawling network of settlements they uncovered under dense forest represents a type of low-density urbanism, the first of this kind found in tropical lowlands of South America, featuring numerous elaborate ceremonial constructions including stepped platforms and U-shaped mounds, all orientated to the north-northwest.

According to archaeologist Christopher Fisher of Colorado State University, who was not involved in the study, the hidden signs of human-modified ancient landscapes will prompt a rethink about early societies in the Amazon region.

"The scale of the architectural remnants at these sites, which include earthen pyramids that once towered more than 20 meters over the surrounding savannah, cannot be overstated and is on a par with that of any ancient society," writes Fisher in a separate commentary on the study.

For decades, however, some archaeologists had presumed that poor tropical soils in the Llanos de Mojos plains of Bolivia, like the Maya strongholds of Central America, were typically incapable of supporting large populations and sophisticated, urbanized civilizations.

But as past evidence suggests, the Casarabe people were skilled agriculturalists who transformed the seasonally flooded, Amazonian savannas into productive landscapes, cultivating crops whilst hunting and fishing.

Yet little was known about how the Casarabe people built ceremonial structures or arranged their settlements.

Adding to that story now is LIDAR, the remote-sensing method that scans the Earth's surface using airborne laser beams, accomplishing "in a single flight what would previously have taken years of gruelling fieldwork", explains Fisher.

In the study, Prümers and colleagues describe two large settlements, Cotoca and Landívar, which were the central hubs of a regional network of smaller sites – 24 in total – connected by still-visible causeways that fan out into the landscape for several kilometers.

"These two large settlement sites were already known, but their massive size and architectural elaboration became apparent only through the LIDAR survey," writes the team.

They estimate the Casarabe people moved some 570,000 cubic meters of earth to construct Cotoca, ten times as much dirt as what the Tiwanaku people moved to build the largest structure found thus far in the Bolivian highlands, the Akapana pyramid. 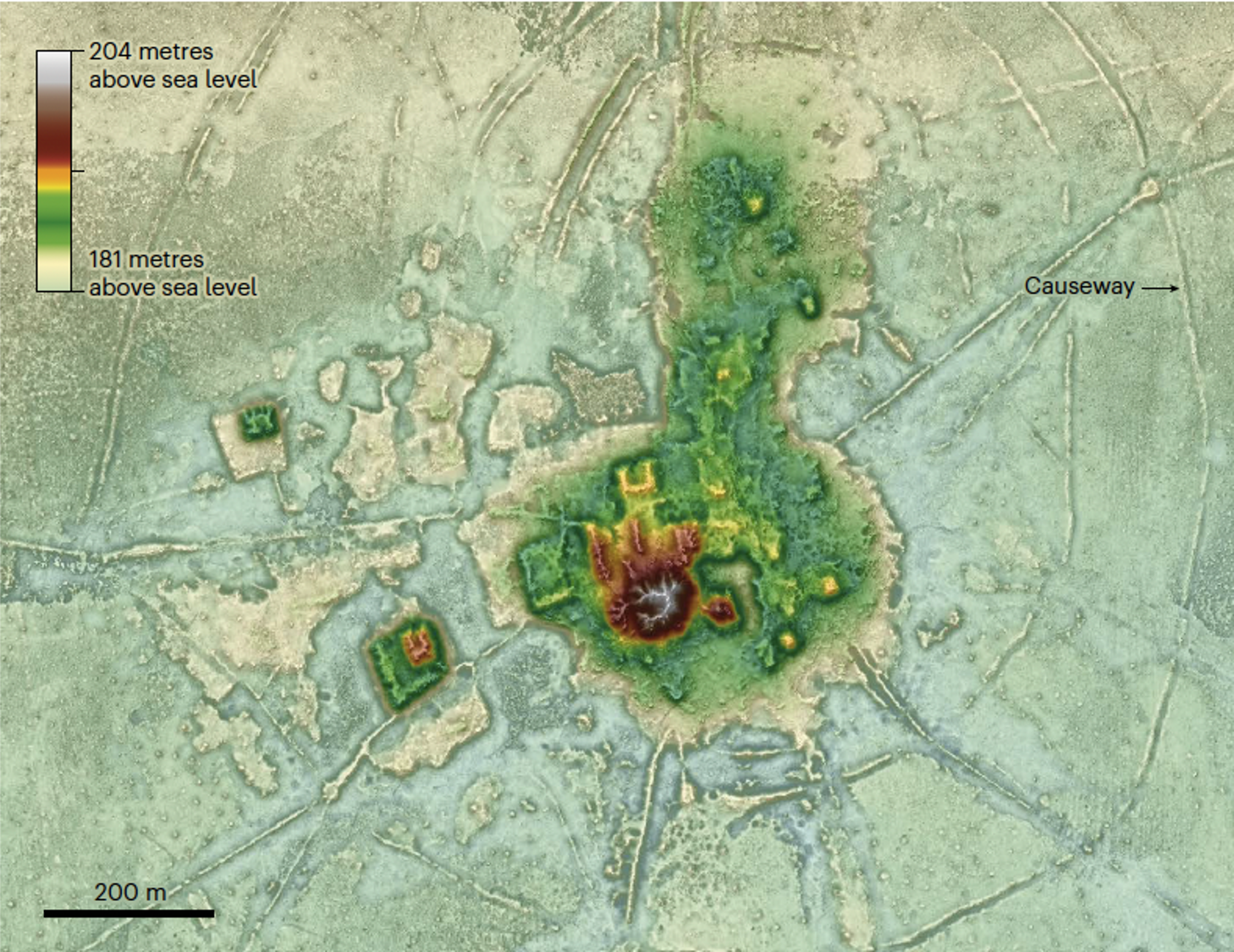 The Casarabe people also built moats and ramparts to defend these central settlements, and massive water-control systems designed to cultivate food surpluses that, the archaeologists deduce, could support a large Casarabe population.

The layout and scale of the interconnected settlements also suggest that the Casarabe people of northern Bolivia had created a social and public landscape comparable to that of more familiar Andean cultures.

This is significant because the hierarchical layout of urbanized settlements has long been used as an archaeological shorthand for inferring social complexity, so this newly exposed collection of settlements suggests "a level of social complexity not often associated with early Amazonia, until now", Fisher says.

"Acceptance of the new orthodoxy for the Maya was a decades-long 'slow-burn', but because of LIDAR it will be more like an explosion for Amazonia," Fisher adds.

Only so much can be gleaned from the air, however, so if the sites are accessible, ancient artifacts could yet be found, which might fill in more details about the diets, lifestyle, and cultural practices of these agricultural societies.

But rapid ecological change threatens these easily-eroded earthen ruins, so there is no time to waste in documenting what remains of the Casarabe culture "before the archaeology vanishes forever," Fisher writes.

Establishing strong partnerships with local Indigenous peoples will also be vital to tackle issues of data sovereignty, access, and privacy, Fisher notes, and to recreate a fuller, richer picture of ancient Amazonian societies.

The research was published in Nature.