( Ramadan B. Hussein/University of Tübingen)

An entire previously unknown burial complex has been uncovered in the Egyptian desert necropolis of Saqqara. The finds centre on a mummification workshop, where priests prepared the bodies of the deceased for burial - a burial shaft in its middle tunnelled up to 30 metres (98 feet) underground.

Down this shaft, archaeologists found a number of burial chambers, with three wooden coffins, a limestone sarcophagus, and a mummy, as well as grave goods for the afterlife.

Amongst the discoveries was also something extraordinary: one of the coffins contained a mask worn by the mummy, made of gilded silver, with eyes inlaid with calcite, obsidian and a black stone that could be onyx. A mask of this type hasn't been found since 1939.

"The finding of this mask could be called a sensation," said archaeologist Ramadan Badry Hussein of the University of Tübingen, and head of the German-Egyptian team that made the discovery.

"Very few masks of precious metal have been preserved to the present day, because the tombs of most Ancient Egyptian dignitaries were looted in ancient times." 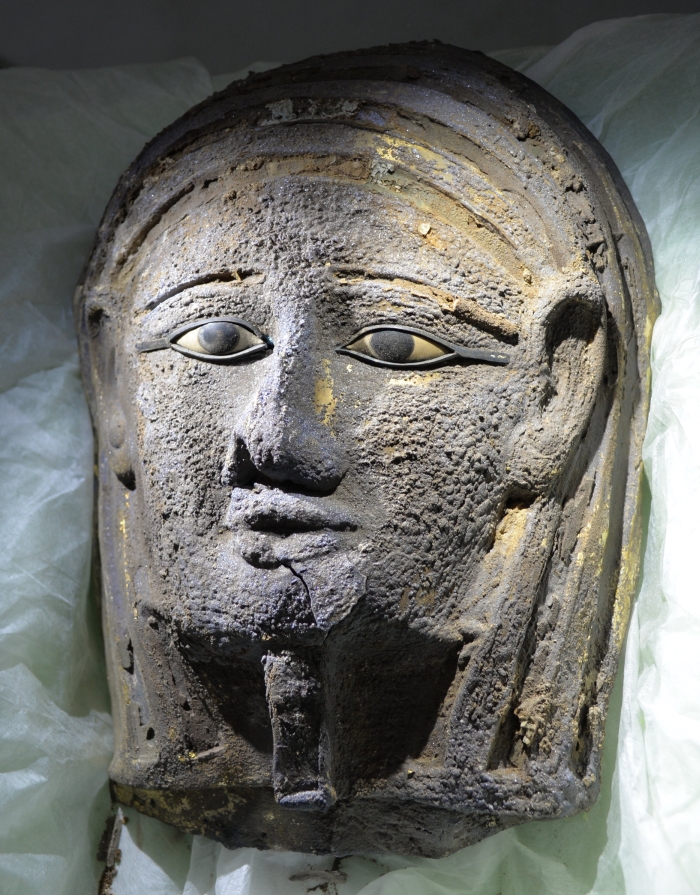 (Ramadan B. Hussein/University of Tübingen)

The team was able to figure out the identity of the wearer of the mask - he was the Second Priest of the mother goddess Mut and the Priest of the goddess Niut-shaes, a serpent form of Mut. He lived and died during the 26th dynasty, the Saite-Persian period from 664 to 404 BCE.

However, the painted plaster bearing his name was broken, and a piece was missing. The team was only able to ascertain that his priest name included the name of the creator goddess Neith.

The tomb complex where the archaeologists were working consisted of several burial shafts. Over one of them, they found the remains of a building constructed of mud brick and limestone blocks.

This, they ascertained, was where the priests would mummify the bodies prior to burial.

One of the burial chambers. (Egyptian Ministry of Antiquities)

It contained two large basins with a ramp between them, surrounded by mudbrick walls, which were likely used for two purposes: to dry the bodies using a type of natural, salt-based preservative called natron; and to prepare the linen bandages for wrapping.

Pots found in a sort of basement contained measuring cups, and bowls inscribed with the names of the oils used in the embalming process.

"We are standing before a goldmine of information," Hussein said at a press conference.

"This is so important as it's extensive. We have oils and measuring cups - all of them are labelled … from this we can find the chemical composition of the oils and discover what they are." 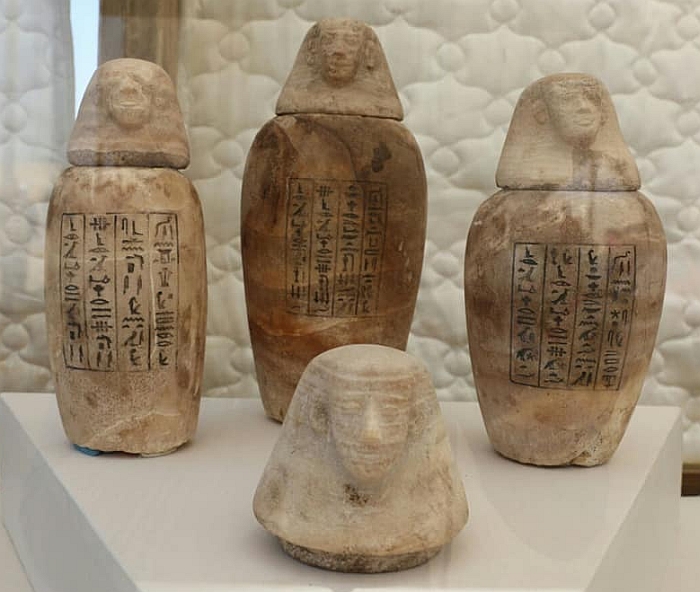 Alongside the burials, the archaeologists found alabaster canopic jars, used by the ancient Egyptians to contain the organs of the deceased, which were removed during the mummification process; and ushabti figurines to serve the deceased fired in faience, a type of tin glazing over pottery.

The team used cutting-edge photogrammetry and 3D laser scanning to help document the shape of the shaft hewn from the bedrock. They are also creating 3D laser scans of all the artefacts they find therein.

Meanwhile, further excavation is expected to yield even more fascinating discoveries - including, hopefully, the name of the priest with the gilded face.