We all know what goosebumps are, but why have we evolved to hang on to this seemingly pointless physical reaction to the cold? New research suggests an answer: regulating stem cells that control hair follicles and hair growth.

In a detailed analysis of mice, scientists found that the specific muscles that contract when goosebumps appear are connected to the sympathetic nervous system. When low temperatures are sensed, these muscles bridge the gap between sympathetic nerves and hair follicles.

In the short term, it causes hair to stand up and goosebumps to appear; in the long term, it appears to promote hair growth. The researchers say this is an important link between stem cells – which the body can use to create other kinds of cells – and external stimuli. 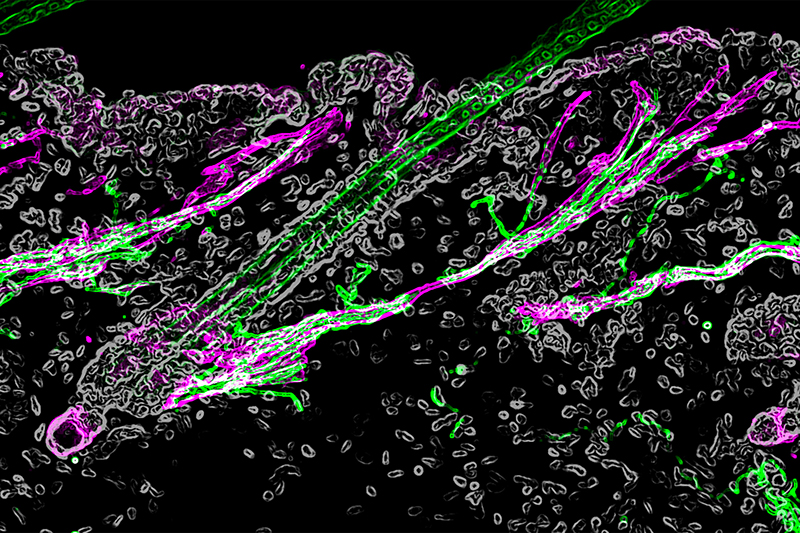 Above: Hair follicle, sympathetic nerve (green), and muscle (magenta) under the microscope.

"The skin is a fascinating system," says biologist Ya-Chieh Hsu from Harvard University. "It has multiple stem cells surrounded by diverse cell types, and is located at the interface between our body and the outside world. Therefore, its stem cells could potentially respond to a diverse array of stimuli – from the niche, the whole body, or even the outside environment.

"In this study, we identify an interesting dual-component niche that not only regulates the stem cells under steady state, but also modulates stem cell behaviours according to temperature changes outside."

The team of researchers used high-resolution electron microscopy to identify this hair-growth regulation system, which involves the three types of tissue found in many organs: nerves (the sympathetic nerve), mesenchyme (holding the small muscles), and epithelium (the hair follicle stem cells). 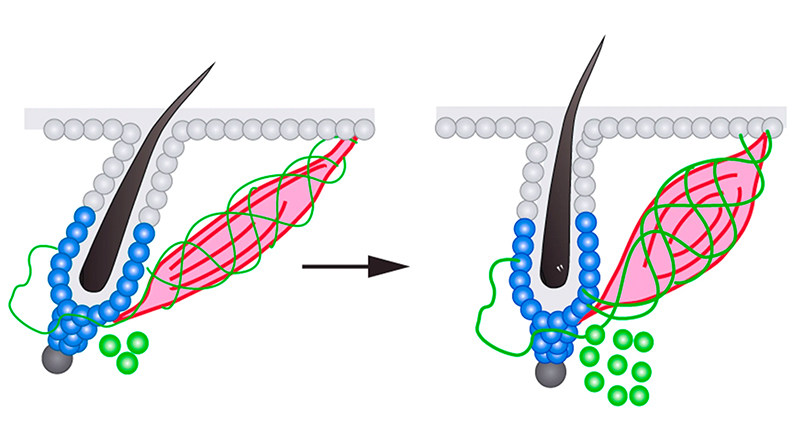 Above: How the muscle (pink), the sympathetic nerve (green), and the hair follicle stem cells (blue) react to cold.

The research also showed how prolonged cold puts the sympathetic nerves in a state of high alert, above the normal low-level activation that they spend most of their time at. More neurotransmitters are released, triggering quicker activation of the stem cells and, ultimately, quicker hair growth.

On top of that, the team established that the muscle was indeed an essential link between nerves and follicle stem cells – when the muscle was removed, the connection was lost. The growth of the muscles is actually triggered by the hair follicles themselves, according to the activity observed in mice, anyway.

"We discovered that the signal comes from the developing hair follicle itself," says biologist Yulia Shwartz. "It secretes a protein that regulates the formation of the smooth muscle, which then attracts the sympathetic nerve.

"Then, in the adult, the interaction turns around, with the nerve and muscle together regulating the hair follicle stem cells to regenerate the new hair follicle. It's closing the whole circle – the developing hair follicle is establishing its own niche."

While these same interactions haven't been observed in humans yet, biological similarities between mice and other mammals in this area make it likely that the same processes are going on underneath our own skin – and that's why we can still get goosebumps.

This same tightening of muscles around hair follicles causes the little bumps on your skin to appear, and scientists think that back in the days when we were a lot hairier as a species, it would have provided some immediate defence against the cold. Now, an additional long-term strategy has also been revealed.

The researchers intend to do further work on the interaction between external environments and the stem cells in the skin, including looking at any other possible reactions that might be going on that we don't know about.

"We live in a constantly changing environment," says Hsu. "Since the skin is always in contact with the outside world, it gives us a chance to study what mechanisms stem cells in our body use to integrate tissue production with changing demands, which is essential for organisms to thrive in this dynamic world."