Seeing what the heck is going on inside of us is useful for many aspects of modern medicine. But how to do this without slicing and dicing through barriers like flesh and bone to observe living intact tissues, like our brains, is a tricky thing to do.

Thick, inconsistent structures like bone will scatter light unpredictably, making it difficult to figure out what's going on behind them. And the deeper you wish to see, the more scattered light obscures fine and fragile biological structure.

There are plenty of options for researchers who are keen to watch living tissues do their thing, using clever optical tricks to turn scattered photons moving at certain frequencies into an image. But by risking tissue damage or operating only at shallow depths, they all have drawbacks.

A team of scientists has now found a way to create a clear image from scattered infrared light emitted from a laser, even after it's passed through a thick layer of bone.

"Our microscope allows us to investigate fine internal structures deep within living tissues that cannot be resolved by any other means," said physicists Seokchan Yoon and Hojun Lee from Korea University.

While a technique called three-photon microscopy has succeeded in capturing images of neurons beneath a mouse skull before, most attempts to get crystal-clear imagery from bone-cased animal heads require cutting openings through the skull.

Three-photon microscopy uses longer wavelengths and a special gel to help see beyond bone, however this method can only penetrate so deep, and combines light frequencies in a way that risks damaging delicate biological molecules.

By combining imaging techniques with the power of computational adaptive optics previously used to correct optical distortion in ground-based astronomy, Yoon and colleagues were able to create the first ever high-resolution images of mouse neural networks from behind its intact skull. 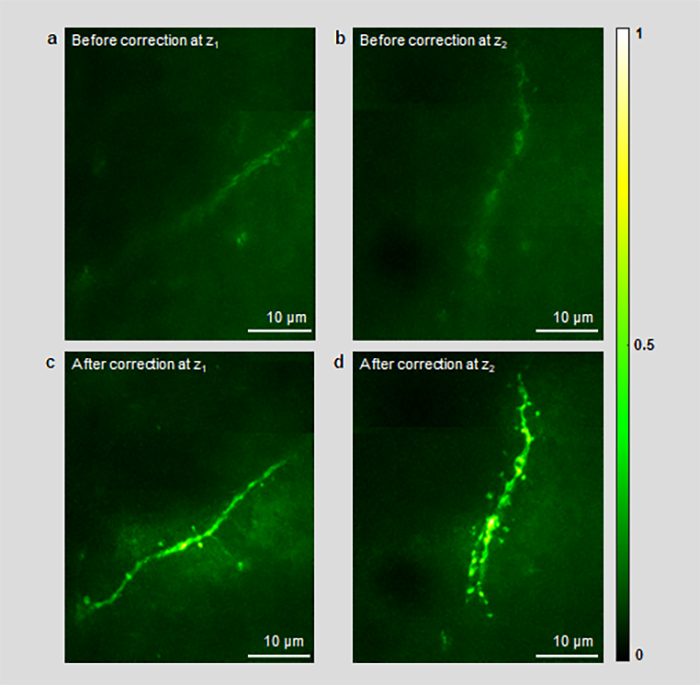 When light (in this case, from a laser) passes through an object, some photons travel straight through, while others are deflected. Bone, with it's complex internal structure, is particularly good at scattering light.

The farther the light has to travel, the more those ballistic photons scatter out of the picture. Most microscopy techniques rely on those straight-shooting light waves to build a clear, bright image. LS-RRM uses a special matrix to make the most of any aberrant rays of light.

After recording the reflection matrix, the team used adaptive optics programming to sort out which light particles define and which obscure. Along with a spatial light modulator to help correct other physical aberrations that occur at such small scales of imaging, they were able to generate a picture of mouse neural networks from the data.

"The identification of wavefront aberrations is based on the intrinsic reflectance contrast of targets," the team explained in their paper. "As such, it does not require fluorescent labeling and high excitation power."

Visualising biological structures in their natural living context has the potential to reveal more about their roles and functions as well as allowing easier detection of problems.

"This will greatly aid us in early disease diagnosis and expedite neuroscience research," said Yoon and Lee.

LS-RMM is limited by computing power, as it requires intense and time-consuming computations to process complicated aberrations from small detailed areas. But the team suggests their aberration correction algorithm could also be applied to other imaging techniques to allow them to resolve deeper images, too.

We can't wait to see what this new technology will reveal hidden inside us.