Scientists Are Closer to Understanding What Wiped Out Easter Island Society

For centuries, researchers have puzzled over the circumstances that led the dramatic crash in the native population on Easter Island - the remote Pacific Ocean island famous for its huge monolithic human statues.

Although it’s well known that attacks by Peruvian slave raiders and outbreaks of disease killed most of the remaining Rapa Nui’s in the 1800s, it’s still heavily debated what caused the initial population decline back in the 1700s.The big question is, were the Rapa Nui already in a tailspin before Europeans arrived, as a result of unchecked population growth in a fragile environment?

“In the current Easter Island debate, one side says the Rapa Nui decimated their environment and killed themselves off," Oliver Chadwick, a geographer from the University of California, Santa Barbara, who was part of the research team, said in a press release. "The other side says it had nothing to do with cultural behaviour, that it was the Europeans who brought disease that killed the Rapa Nui.”

“Our results show that there is some of both going on, but the important point is that we show evidence of some communities being abandoned prior to European contact,” said Chadwick in the release. But that doesn’t mean that the population was already in collapse - in fact, it may suggest that the Rapa Nui managed their environment better than previously presumed.

To work out what happened, Chadwick teamed up with archaeologists from around the world to examine six agricultural sites that had been used by the statue-builders of the Rapa Nui people.

At three of these sites, the team found spear points made out of obsidian, a hard, black, glass-like volcanic rock (better known as dragonglass in the Game of Thrones series) which they could use to date how long the site had been used by humans for, and how long it had been left abandoned.

They did this by measuring the amount of water that had penetrated the obsidian’s surface. They then also analysed the historical climate and soil chemistry of the three sites, which are shown on the map below, and found that they were all quite diverse.

Generally, Easter Island has less available soil nutrients than other Hawaiian Islands, the researchers note. But although the first site they looked at had low rainfall as the result of being in the shadow of a volcano, it had relatively high soil nutrient availability. The second site, on the other hand, experienced high rainfall but had a low nutrient supply. And the third site, which was near the northeast coast, had pretty regular amounts of rain and relatively high soil nutrients, making it ideal for planting crops.

The data from the obsidian spear tips revealed that the first two sites - the very dry and the very wet area - were both abandoned before European contact with the island. The third site, however, maintained a robust population well after Europeans had arrived, the research found.

The results have now been published in the journal Proceedings of the National Academy of Sciences, and they suggest that the Rapa Nui reacted to regional shifts and natural environmental barriers so that they could grow sufficient crops, rather than degrading the environment themselves. 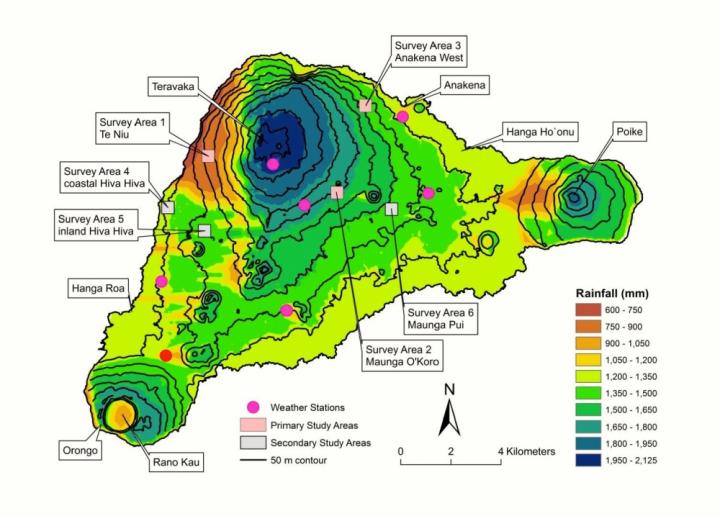 “This analysis demonstrates that the concept of “collapse” is a misleading characterisation of prehistoric human population dynamics,” the researchers conclude in their paper.

And, as the press release notes, in the nutrient-rich centre of the island, the Rapa Nui were able to maintain a viable culture, long after Europeans had arrived and brought with them a range of other threats, including smallpox, syphilis and tuberculosis.

"The pullback from the marginal areas suggests that the Rapa Nui couldn't continue to maintain the food resources necessary to keep the statue builders in business," Chadwick explained in the release. "So we see the story as one of pushing against constraints and having to pull back rather than one of violent collapse."

Other teams of have also recently uncovered insight into Stonehenge, the pyramids, and also the bizarre site known as Whale Bone Alley in Siberia. And the researchers now believe they can use the same method to find out more about other mysterious prehistorical societies around the world. Secrets of the past, watch out - scientists are coming for you.