Today, flowering plants (or angiosperms) make up around four-fifths of all the green plants on Earth, but for billions of years they weren't around at all. Now biologists have been able to fully chart the rapid rise of angiosperms over the last 140 million years.

A newly published 'time tree' of flowering plants shows in detail how this massive botanical upheaval came about, resulting in the 300,000 or so known species that are currently growing around us.

To come up with the timeline, researchers assembled the largest ever collection of angiosperm fossil records – 238 in total – often digging back through hundreds of years of data and translating documents from a variety of languages. 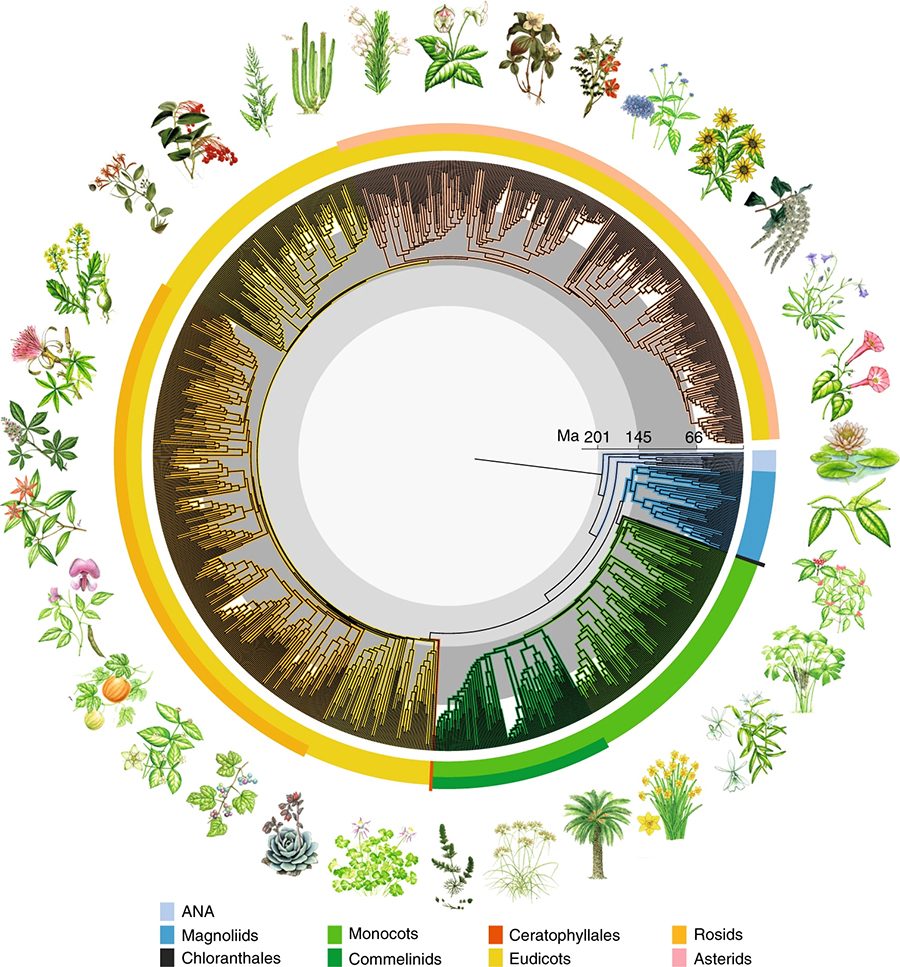 "Fossils are the most important pieces of evidence needed to understand these important evolutionary questions around angiosperm divergence times," says evolutionary biologist Hervé Sauquet, from the University of New South Wales.

"Previous studies of this nature only used 30 to 60 fossil records and we wanted to increase this number significantly and set a higher standard for fossil calibration by documenting every part of the process."

Besides amassing hundreds of fossil records, the team also compared their time tree with more than 16 million points of geographical data indicating which plants are flowering where. It's by far the most comprehensive picture of these species that we've ever had, answering a lot of questions about the timing, location and origins of plant evolution.

Taking in 435 flowering plant families in all, the chart shows modern lineages starting to emerge around 100 to 90 million years ago, before they diversified into modern-day flowering spcies around 66 million years ago – this is the difference between the 'stem' age of a species (when it originated) and its 'crown' age (when it started to diversify into the species we know today).

The researchers were able to note these time differences in their tree chart, and were also able to confirm the idea that angiosperms originated in tropical environments – even though the rainforests of today, which are dominated by flowering plants, only appeared relatively recently in Earth's history.

"By estimating both the stem and crown ages for angiosperm families we found a difference of 37 to 56 million years between family origins and the beginning of their diversification into the living species we see today," says evolutionary biologist Susana Magallón, from the National Autonomous University of Mexico.

"To put this into context, the average time lag corresponds to around a third of the entire duration of angiosperm evolution, which is at least 140 million years."

Between the stem and crown ages of angiosperms, dinosaurs were roaming the Earth. It looks as though the world domination of flowering plants was delayed until after the dinosaur age – picking up speed around 66 million years ago. In that respect, angiosperms are relatively late bloomers among plants.

Considering that flowering plants now represent the primary food source for most organisms on land, including human beings, the more we can understand about this origin and evolution process the better.

One of the ways it will help is in figuring out how to best conserve these hundreds of species of plants for the future – if we want to continue to be able to rely on them, then it's in our best interests to understand what makes them flourish.

"Let's face it, the planet is running basically off angiosperms," evolutionary botanist Doug Soltis from the University of Florida, who wasn't involved in the study, told Suzannah Lyons at ABC Science. "Their success is our success, their demise is our demise."