If you want to design something right, look to nature for inspiration – that's the message from scientists who have produced a new type of brush, based on a detailed analysis of a cat's tongue and its ultra-effective grooming capabilities.

In particular, the team looked at certain types of papillae on the tongues of cats, tiny scoop-shaped structures made of keratin that help give the tongue its texture. With high-speed videos, CT scans, and other measurements, the researchers investigated how these little spines work – and create their prototype hairbrush.

What they found was that papillae on cat tongues wick (or draw up) saliva from the mouth via their hollow endings, and do so exceptionally well - up to 4.1 microlitres each time (about one-tenth of the liquid in a single eyedropper drop). 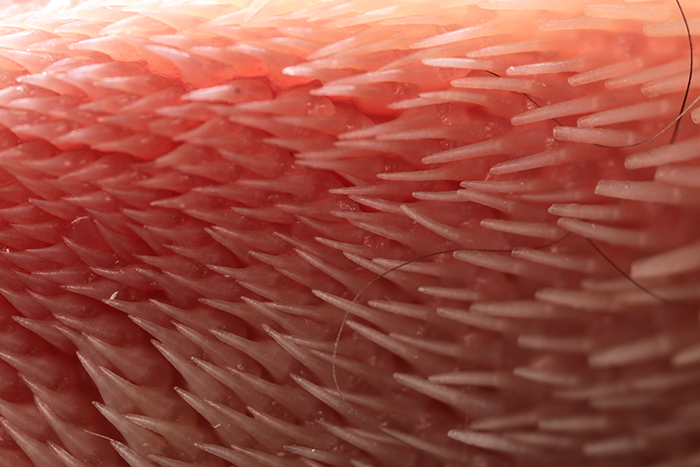 The surface of a cat's tongue showing the papillae. (Alexis Noel)

Nearly half of that saliva gets deposited on the fur with each lick, the research showed, which means fur can be rapidly cooled or cleaned.

"We highlighted one function of the papillae, but it is possible that there may be others," explain the researchers, Alexis Noel and David Hu, from the Georgia Institute of Technology in Atlanta.

"Previous studies suggest that papillae shape may help the cat with gripping food during eating. The sharp tip may help with tissue deformation and penetration into meat. It may also play  a role in stimulating the cat's own skin during grooming."

The study covered six different species of cat – from domesticated cats to lions – and identified four stages in a grooming lick: tongue extension, tongue expansion and tissue stiffening, a sweep of the tongue through the fur, and tongue retraction.

As you've probably noticed if you have one in your home, domesticated cats can spend up to a quarter of their waking hours grooming, using their tongues to remove things like dirt and fleas from their fur, as well as using the process to shed excess heat from the fur.

During this process, the papillae can reach through a cat's fur to the skin – papillae length can vary for this very reason, the study showed. Seeing this, the team got an idea to develop a brush based on the features of the cat tongue. Prototype of the brush (Alexis Noel)

Called a tongue-inspired grooming (TIGR) brush, the brush uses 3D-printed artificial papillae – scaled up four times from those on a cat's tongue – that are then placed on top of a flexible silicone substrate.

Based on initial tests, the TIGR brush needs less force to use on cats and is easier to clean than a standard brush. Its papillae can rotate if needed to avoid tangling.

The team hopes such a brush could be used to apply cleaning lotions or medications for cats, or even remove allergens from cat fur.

Those allergens could include the protein Fel d 1, which has been linked to cat allergies in the past, and is highly concentrated in cat saliva. If we know how more about how it spreads – and this study should help – we might be able to better reduce allergic reactions without allergy shots or daily baths.

"Our TIGR brush might be used to distribute cleaning solutions or medications right onto the cat skin, and provide an alternate solution to cat allergies," write Noel and Hu.