Pop a bacterium in a petri dish on an agar nutrient medium and it will go about its business, growing in its own special way.

Escherichia coli grows pretty slowly but steadily in clumps. Acinetobacter baylyi, on the other hand, moves fast, spreading out in all directions until it covers the entire petri dish in 24 hours.

But what happens when you put them in a petri dish mixed together? Well, something wonderful happens. They combine to spread outwards in a petalled pattern from a central deposit.

The discovery of this was made quite by accident, and it led researchers to examine the dynamics of the bacterial growth to figure out how the pattern is made.

"We were actually mixing these two bacterial species for another project, but one morning I found a mysterious flower-like pattern in a petri dish where a day earlier I placed a droplet of the mixture," said computational biophysicist Liyang Xiong of the University of California, San Diego.

"The beauty of the pattern struck me, and I began to wonder how bacterial cells could interact with each other to become artists." 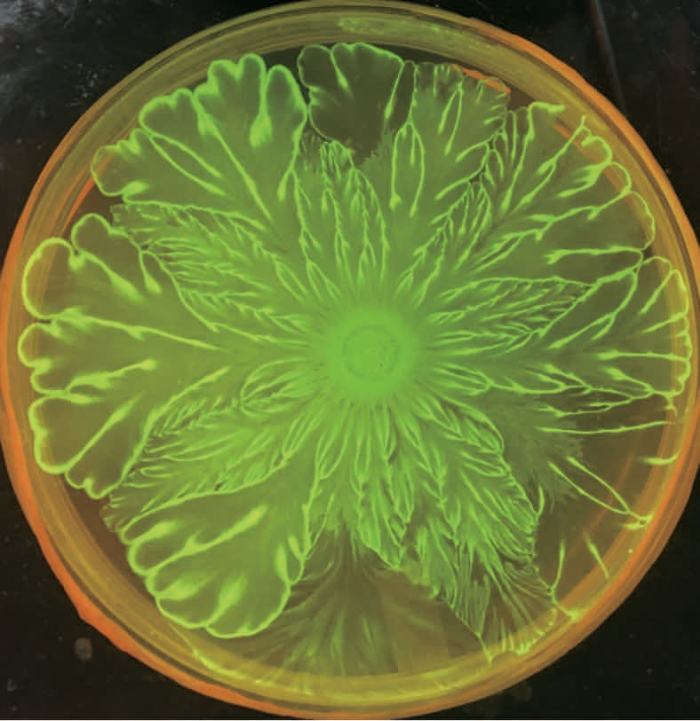 To figure it out, the team turned to mathematical modelling. They entered the physical properties of the two bacteria - their growth rate, morphology, and effective friction.

A. baylyi can move so quickly because it has little hair-like bristles called pili that act like legs, propelling it where it needs to go. This ability to move is called motility. By contrast, E. coli has no pili. It is non-motile.

When the two bacteria are placed in the agar plate, E. coli rides the expanding outer wave of the A. baylyi, and this is what produces the pattern, the team found. The drag produced by the E. coli destabilises that boundary.

Where there are fewer E. coli, the A. baylyi colony pushes outward faster; but larger concentrations of E. coli move more slowly. This is what creates the flower-like shapes in the shape of the combined colony.

The same effect should be observable when any two bacteria mix, if one is motile and the other is non-motile.

This discovery could be a fun effect for microbial artists to play with (go check that link out, it's really fun), but the research has a practical benefit too. For one thing, it can help scientists understand the complex patterns observed in bacterial colonies in the wild. 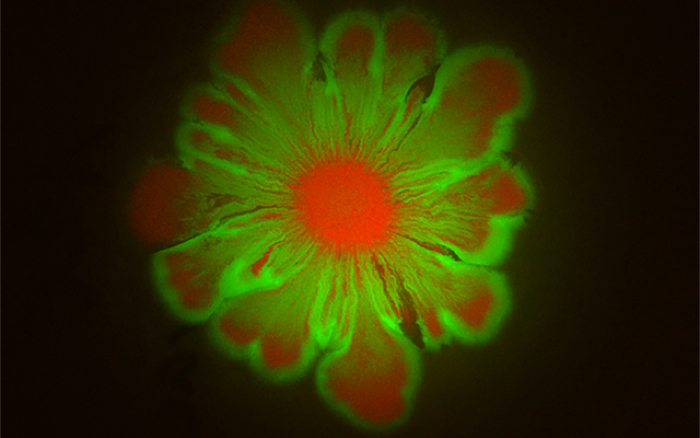 There are potential health benefits too. Bacteria can be a huge problem when it comes to long-term medical devices and implants, such as pacemakers and catheters. But by studying the patterns of multiple bacteria spreading together, it could help scientists figure out ways of mitigating the issue.

"However, the majority of laboratory studies and theoretical models were focused on the dynamics of single-strain colonies. Most bacteria in natural habitats live in multi-strain communities, and researchers are finally beginning to look for mechanisms controlling their cohabitation."

"While a number of biochemical mechanisms of inter-species communication and cooperation have been identified," Tsimring said, "we found that surprising complexity may result from purely physical interaction mechanisms."