Scientists Discover a Vast Reservoir of Freshwater Hidden Beneath The Ocean

Underneath the salty waters of the North Atlantic ocean, geologists have discovered a giant aquifer of freshwater, hidden from view just off the US coast.

While the vast size of this massive cache is surprising, it's not entirely unexpected. Signals of the water first showed up in the 1970s, but until now, nobody suspected that this huge reservoir trapped in porous rock might run almost the entire length of the US Northeast.

"We knew there was freshwater down there in isolated places, but we did not know the extent or geometry," says marine geologist Chloe Gustafson from Columbia University.

In 2015, some of Gustafson's fellow researchers conducted a pilot study off the coast of New Jersey and the Massachusetts island of Martha's Vineyard. 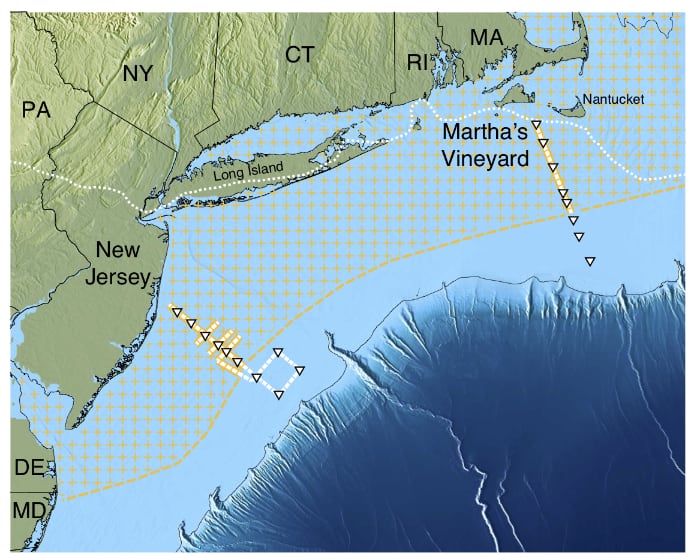 Exploratory prospecting by oil companies as far back as the 1970s had occasionally discovered freshwater when drilling for the fossil fuel, so scientists knew something was down there; but data on the resource – and the size of the cache – was in short supply.

To rectify that, the research crew on the Marcus G. Langseth surveyed the two Northeast coast locations for 10 days, looking for signs of electrical conductivity in the waters below the vessel.

Salt water is a more effective conductor of electromagnetic (EM) waves than fresh water, so EM receivers deployed off the coast enabled the researchers to map the extent of the mysterious aquifer.

The results, published in a study detailing the first comprehensive attempt to map this giant reservoir, reveal a mostly "continuous submarine aquifer system spans at least 350 km [217 miles] of the US Atlantic coast and contains about 2,800 cubic kilometres of low-salinity groundwater".

Due to the nature of the EM mapping technique, the results remain somewhat interpretive for now, but the team infers that the aquifer's freshwater cache likely runs all the way from Delaware (at the south end) up past New Jersey, New York, Connecticut, Rhode Island, and all the way to Massachusetts.

As crazy as it sounds, the groundwater reservoir might even extend farther than that, the researchers hint.

"If we consider the potential northeast and southwest extensions beyond our profiles, there may be several times more groundwater underlying the northeast portion of the US Atlantic continental shelf, representing a freshwater resource that rivals the largest onshore aquifers," the authors explain.

As for how the aquifer got there, the researchers say it likely happened when vast amounts of fresh meltwater from the last Ice Age got trapped in rocky sediment.

To use the water for drinking purposes – if we were to one day decide to tap it, that is – it would first need to be desalinated, since parts of it would be brackish (slightly salty), especially the portions closest to the seawater periphery.

For now, nobody's suggesting we need to do that, but the existence of the giant aquifer suggests similar groundwater systems could easily be hidden in other hotter and drier parts of the world, like California, Australia, or the Middle East.

"It could turn out to be an important resource in other parts of the world," Gustafson says.