Shooting a drop of water with one of the world's most powerful lasers might not be an obvious way to make an ice cube. But it is one way, at least if you want the kind of ice you might find deep inside planetary giants.

Scientists have known about exotic forms of ice for decades, but have only recently managed to create some of the more extreme varieties in the lab.

A new study by researchers from the University of Chicago and the Carnegie Institution of Washington in the US recently held a drop of water in a diamond grip, turning up the pressure and cooking it with a laser to learn how it freezes into a 'superionic' state.

Theoretically speaking, superionic ice is the arrangement of water molecules as a lattice of oxygen atoms surrounded by a pool of fidgety hydrogens that just don't sit still. It's technically ice, but like a liquid and a solid in one.

It's also the kind of ice that forms not at low temperatures, but at extreme pressures. Think of the level of pressure that naturally forms deep, deep underground, or better still, near the core of massive planets like Neptune.

While models predict some of the conditions under which this phase of water should appear, they're a little vague when it comes to the precise temperatures.

At the heart of the problem is a question over something called the triple point – the combination of pressure and temperature at which a substance is on the brink of melting, freezing, and sublimating.

To make it even more complicated, the kind of solid structure water can settle into can vary, too. Ice comes in many forms, depending on the arrangements and movements of its constituent elements.

Experiments could help nail down the path of characteristic changes between liquid and superionic states, but until now getting a reliable set of results has been a real challenge, with observations under different methods disagreeing by hundreds of degrees.

Usually a water sample needs to be put under at least 50 gigapascals of pressure – half a million times the force you're experiencing right now under Earth's atmosphere – and then heated with a high-powered laser to come close to seeing anything significant. 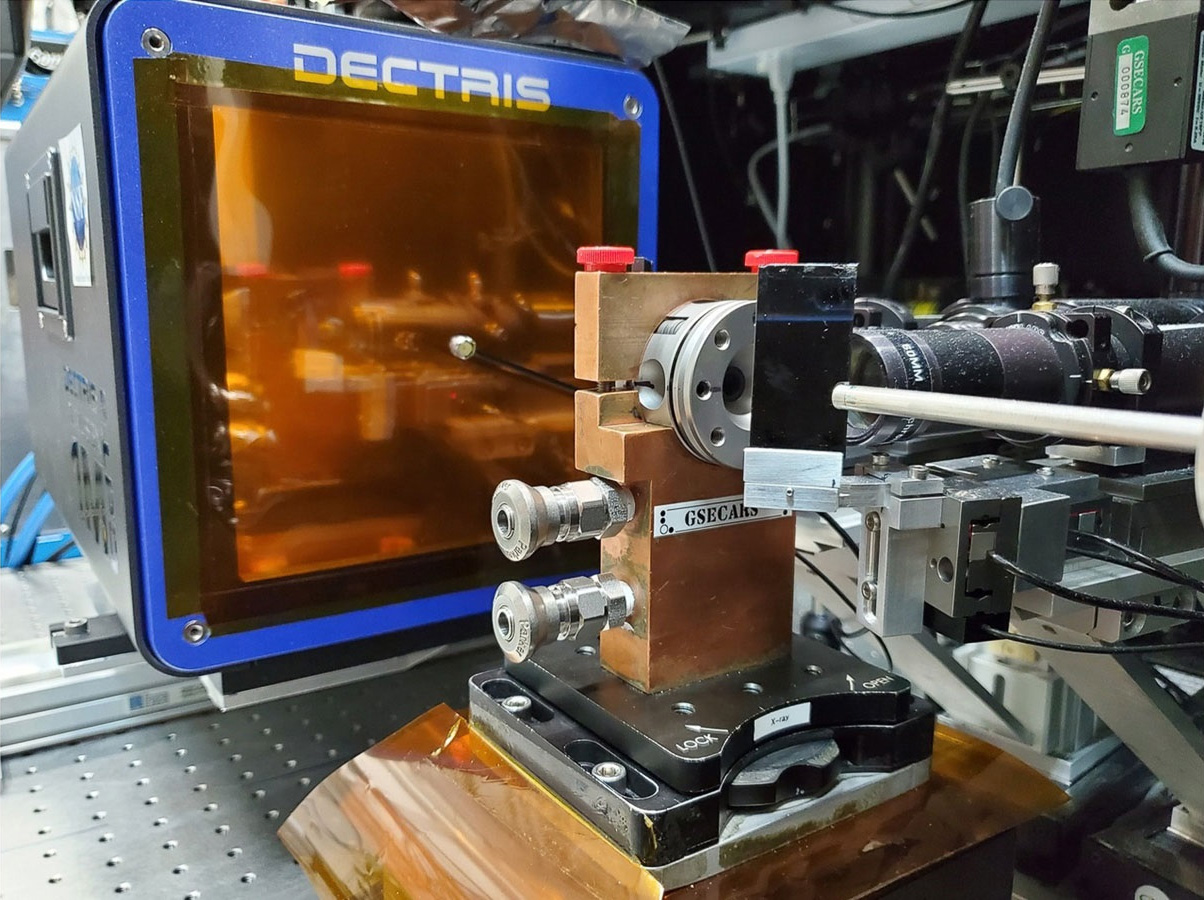 So when a team of physicists at the Department of Energy's Advanced Photon Source (APS) set about squeezing water inside a diamond-vice at a relatively mild 20 gigapascals, they weren't expecting a lot.

"It was a surprise – everyone thought this phase wouldn't appear until you are at much higher pressures than where we first find it," says geophysicist Vitali Prakapenka from the University of Chicago.

​"But we were able to very accurately map the properties of this new ice, which constitutes a new phase of matter, thanks to several powerful tools."

With their superionic ice sample in place, the team was able to use the APS accelerator to generate a beam of X-rays; when scattered off the ice sample, these X-rays indicate the positions of its atoms.

This allowed them to gauge when the water underwent specific phase transitions as the conditions changed, and to describe the steps it takes to transform into superionic ice.

They were able to crank the pressure in their diamond anvil and heat it to 6,500 degrees Kelvin, allowing them to map the stability of two phase changes of ice at high temperatures from 20 all the way up to 150 gigapascals.

Because of the way the hydrogens move about inside the exotic ice, visible light has a hard time passing through, making its appearance black.

That buzz of hydrogen atoms flowing through an oxygen lattice could also have an impact on the surrounding electromagnetic field, and maybe even play a role in the formation of a planet's own protective magnetosphere.

We're only just beginning to learn how the movements of our planet's oceans and the chemistry of its mantle have a subtle influence over our world's magnetism. Learning how exotic ices also exert a nudge could help us further tweak our models.

What this might mean for alien worlds, or even our own planet, requires a lot more investigation.

"It's a new state of matter, so it basically acts as a new material, and it may be different from what we thought," says Prakapenka.

This research was published in Nature Physics.