Four years of data collected by the European Space Agency's (ESA) Swarm mission have contributed to the mapping of this 'other' magnetic field, one that could help us build better models around global warming.

Physicist Nils Olsen from the Technical University of Denmark presented the surprising results at this year's European Geosciences Union meeting in Vienna, explaining how his team of researchers managed to detail such a faint signature.

"It's about 2 – 2.5 nanotesla at satellite altitude, which is about 20,000 times weaker than Earth's global magnetic field."

On a fundamental level, both fields are the result of a dynamo effect produced by charged particles being sloshed around in a fluid.

The stronger magnetic field that tugs on our compass needle forms from the steady movement of molten rock deep under our feet.

This field also leaves its signature in the alignment of particles embedded in Earth's crust, a pattern that has also been analysed in detail by Swarm.

In fact, the ESA also released the most detailed map to date of this mottled magnetic imprint at the meeting. Take a look at this stunning image below: 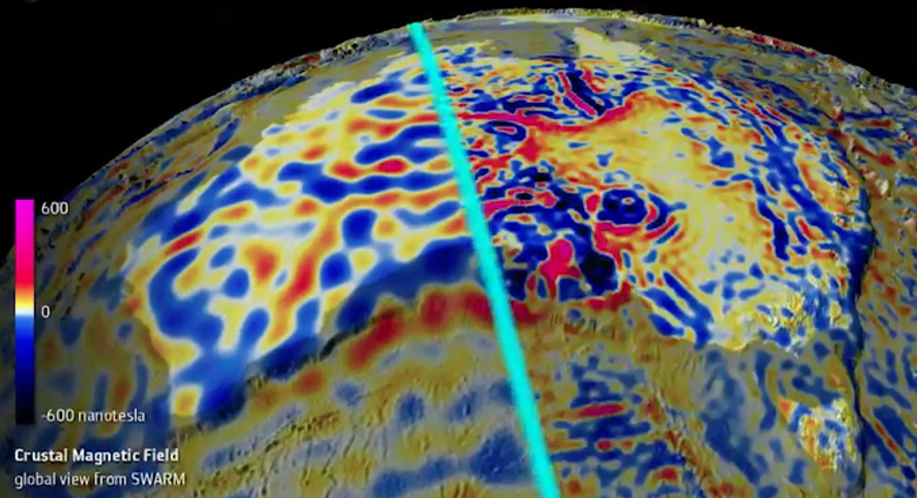 But it was details of the 'other' dynamo that astonished the meeting's audience.

Ions dissolved in our oceans' waters also produce an incredibly weak field as they move about in currents and tides.

The faint patterns created by movements such as the Gulf Stream are difficult to tease apart from the bold background of the stronger magnetic field.

But the ebb and flow of the tides as they're pulled by the orbiting Moon produces a clear pulse, one that makes those weak signals stand out.

"We have used Swarm to measure the magnetic signals of tides from the ocean surface to the seabed, which gives us a truly global picture of how the ocean flows at all depths – and this is new," says Olsen.

Having multiple ways to study the movements of our ocean waters is serious business as we hone models describing the shifting patterns of heat energy around the globe.

As water is capable of holding onto significant amounts of heat, predicting our planet's ability to soak up excess warmth trapped by rising amounts of greenhouse gases relies on knowing precisely how tides and currents move in three dimensions.

Knowing where all of that warm water is going deep, deep down could explain cycles of accelerating global warming.

The new magnetic-ocean map also has another important application.

"In addition, because this tidal magnetic signal also induces a weak magnetic response deep under the seabed, these results will be used to learn more about the electrical properties of Earth's lithosphere and upper mantle," says Olsen.

Right now the moving magma swirling beneath the crust are studied using a mix of gravity measurements and seismology.

Finding patterns in the push and pull between the two magnetic fields just might allow us to map these currents of molten minerals even better.

Since there's so much we still don't know about how our planet's magnetism – such as why it happens to flip over every now and then – every new discovery might make a difference.

The team's results were presented at the 2018 European Geosciences Union meeting.