Scientists Find a Tiny Stomach Hidden Inside Lung Tumours, Because Cancer Is Changing

Researchers have spotted a miniature stomach, duodenum, and small intestine hidden among the cells of lung tumor samples.

Tumors are notoriously mixed up; cells from one part often express different genes and adopt different sizes and shapes than cells from another part of that same tumor. This discovery back in 2018 was still a surprise, however.

The team discovered that these cells had lost a gene called NKX2-1 that acts as a master switch, flipping a network of genes to set the course for a lung cell.

Without it, the cells follow the path of their nearest developmental neighbor - the gut -much like a train jumping tracks when a railroad switch fails. 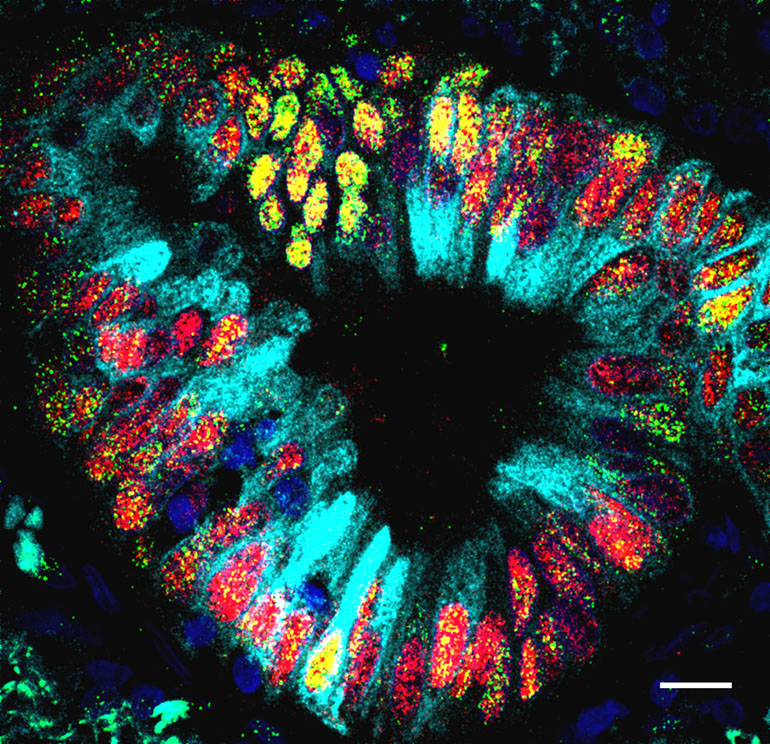 The findings, published in Developmental Cell, underscore the amazing resilience and plasticity of cancer cells.

"Cancer cells will do whatever it takes to survive," says Purushothama Rao Tata, lead study author and assistant professor of cell biology at Duke University School of Medicine and a member of the Duke Cancer Institute.

"Upon treatment with chemotherapy, lung cells shut down some of the key cell regulators and pick up the characteristics of other cells in order to gain resistance."

Tata has spent most of his career studying the cell types that make up normal lung tissue and how these cells display flexibility during regeneration following an injury.

Tata began to wonder whether some of the same rules that he had found governing the normal development and regeneration of tissues might also be responsible for the jumbled nature of tumor cells.

He decided to focus on non-small cell lung cancer, which accounts for 80 to 85 percent of all lung cancer cases.

Lung cancer is the leading cause of cancer deaths worldwide, and has one of the lowest survival rates among all cancers.

Tata analyzed data from the Cancer Genome Atlas Research Network, a large consortium that has profiled the genomes of thousands of samples from 33 different types of cancer.

He found that a large proportion of non-small cell lung cancer tumors lacked NKX2-1, a gene known to specify the lung lineage.

Instead, many of them expressed a number of genes associated with esophagus and gastrointestinal organs.

In the absence of NKX2-1, Tata hypothesized, lung tumor cells would lose their lung identity and take on the characteristics of other cells.

Because during development lung cells and gut cells are derived from the same parent, or progenitor, cells, it made sense that once the lung cells lost their way they would follow the path of their nearest developmental sibling.

To test whether this was the case, Tata and his colleagues generated different mouse models. First, they knocked out the NKX2-1 gene in the lung tissue of mice.

Under the microscope, they noticed features that normally only appear in the gut, such as crypt-like structures and gastric tissues. Amazingly, these structures produced digestive enzymes, as if they resided in the stomach and not the lung.

Having shown that a simple genetic tweak could prompt lung cells to switch developmental tracks, Tata wondered if another tweak or two could fuel them to form tumors. This time, in addition to knocking out NKX2-1, they activated the oncogenes SOX2 or KRAS.

Tata and colleagues then wanted to know if these genes were sufficient to alter the fate of lung cells, or if they needed additional signals from their native microenvironment.

To answer this question, they developed a novel "mini-lung tumoroid" system—miniaturized versions of lung tumor tissue—and found that manipulation of genetics was enough for the lung cells to show such plasticity.

"Cancer biologists have long suspected that cancer cells could shape shift in order to evade chemotherapy and acquire resistance, but they didn't know the mechanisms behind such plasticity," says Tata.

"Now that we know what we are dealing with in these tumors – we can think ahead to the possible paths these cells might take and design therapies to block them."

In the future, Tata plans to use his mini-lung tumoroid system to further explore the mechanisms of resistance in lung cancer cells.

The research has been published in Developmental Cell.

This article was first published on Futurity and is republished here under a CC BY 4.0 license. Read the original article.