Particles collected from Earth's upper atmosphere, originally deposited by comets, are older than our Solar System, scientists say – and these fine bits of interstellar dust could teach us about how planets and stars form from the very beginning.

These cosmic particles have lived through at least 4.6 billion years and travelled across incredible distances, according to the new research into their chemical composition.

The international team of scientists behind this study are confident that we're looking at the very basic materials making up the planetary bodies currently whizzing around our Sun. For anyone studying the origins of the Universe, it's a fantastic finding. 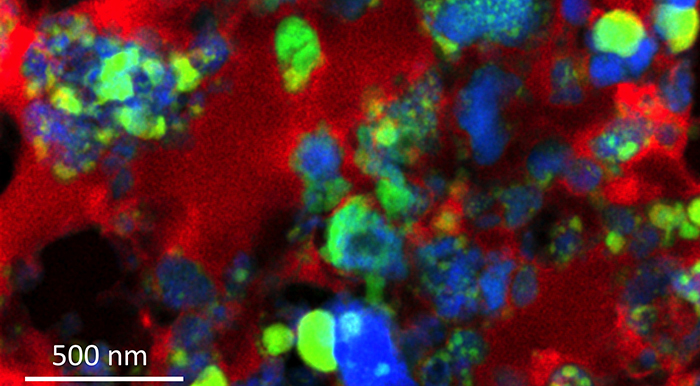 An x-ray spectrometry map of the grains. (Hope Ishii/University of Hawaii; Berkeley Lab)

"Our observations suggest that these exotic grains represent surviving pre-solar interstellar dust that formed the very building blocks of planets and stars," says lead researcher Hope Ishii, from the University of Hawaii at Manoa.

"If we have at our fingertips the starting materials of planet formation from 4.6 billion years ago, that is thrilling and makes possible a deeper understanding of the processes that formed and have since altered them."

This is a rare chance to study the material that formed our Solar System close up. Scientists think it developed from a collapsed disk of gaseous clouds around the Sun, but experts often have to make use of computer simulations to work out a hypothesis.

Now, they have their hands on dust that may have actually been there when the planets in our Solar System were born.

The amorphous silicate, carbon, and ice that was around all those billions of years ago has largely been obliterated or reworked into the planets we have today, with the original form of these substances now mainly found in comets.

Rather than catching a comet, the scientists used samples collected by a NASA stratospheric aircraft, particles burned off comets that had eventually settled high up in Earth's atmosphere.

Using both infrared light and electron microscopes, the team analysed the chemical composition of the particles. In particular, they looked at a subgroup of glassy particles called GEMS (glass with embedded metal and sulfides), measuring just a few hundred nanometres across at most - less than a hundredth of the thickness of a human hair.

The results showed these grains were originally fused together in an environment that was cold and rich with radiation. Even a small amount of heat was enough to break the bonds in the grains, suggesting they formed somewhere like the outer solar nebula – the cloud of dust, hydrogen, helium, and other ionised gases out of which the Solar System formed.

"The presence of specific types of organic carbon in both the inner and outer regions of the particles suggests the formation process occurred entirely at low temperatures," says one of the researchers, Jim Ciston from the Lawrence Berkeley National Laboratory.

"Therefore, these interplanetary dust particles survived from the time before formation of the planetary bodies in the Solar System, and provide insight into the chemistry of those ancient building blocks."

Some kind of sticky organic material might have been responsible for these grains clumping together, and eventually forming planets in the cold and empty early years of the Solar System, the researchers suggest.

And while it's too early to draw any conclusions about what was going on almost 5 billion years ago, the scientists have plans to study comet dust particles in a lot more depth, to try and unlock the secrets of the early Solar System.

"This is an example of research that seeks to satisfy the human urge to understand our world's origins," says Ishii.