Scientists Have Observed a Planet Forming For The First Time Ever

For the first time, scientists have observed a planet being formed and have captured images of dust and gas particles accumulating together to make a protoplanet in a distant solar system.

Researchers from the US and Australia observed the phenomenon taking place in the solar system surrounding a star called LkCa 15, located 450 light-years away from Earth. Catching a planet in the making is an exciting first for astronomers because, of the nearly 2,000 exoplanets we've so far identified, none are in the process of formation.

"This is the first time that we've imaged a planet that we can say is still forming," said Stephanie Sallum, an astronomer with the University of Arizona, who led the study with colleague Kate Follette.

"No one has successfully and unambiguously detected a forming planet before," said Follette, who is now a researcher at Stanford University. "There have always been alternate explanations, but in this case we've taken a direct picture, and it's hard to dispute that." 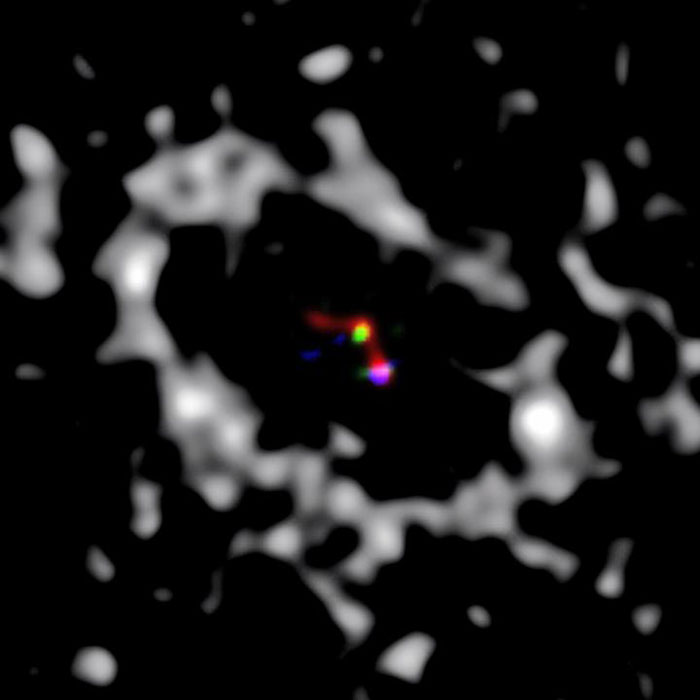 The findings, published in Nature, describe how LkCa15 is surrounded by a special kind of protoplanetary disk, which forms around young stars from the debris that remains after the star has itself formed. The researchers' hypothesis – now supported by their images – is that planets form inside the disk, accreting together from the debris and dust.

"The reason we selected this system is because it's built around a very young star that has material left over from the star-formation process," said Follette. "It's like a big doughnut. This system is special because it's one of a handful of disks that has a solar-system size gap in it. And one of the ways to create that gap is to have planets forming in there."

In this case, LkCa15 is approximately 2 million years old, but that's comparatively young for a star, and recent enough for the system to still feature a circumstellar disk of debris capable of giving birth to new planets.

As many as three planets are in the process of formation around the star, with the researchers tracking their planetary motion between 2009 and 2015, using advanced tools including the world's largest telescope, the Large Binocular Telescope (LBT) in Arizona, and the Magellan Telescope in Chile.

Using the telescopes and the Magellan Telescope's adaptive optics system, MagAO, the researchers were able to distinguish between the spectral fingerprints of two glowing red and very hot objects – the forming star and the forming planet, LkCa 15 b.

"That single dark shade of red light is emitted by both the planet and the star as they undergo the same growing process," said Follette. "We were able to separate the light of the faint planet from the light of the much brighter star and to see that they were both growing and glowing in this very distinct shade of red."

It wasn't easy to tell between them, but now that the researchers have successfully identified the formations occurring around LkCa 15, it may make it simpler for scientists to detect similar planet formations in distant star systems.

"This was a perfect storm of an observational problem," one of the researchers, Peter Tuthill of the University of Sydney in Australia, told Stuart Gary at the ABC. "We're trying to see very faint planets buried in the glare of the star."