Sorry Guys: Largest Sky Survey of Its Kind Finds No Evidence Aliens Are Out There

Scans run of thousands of distant stars looking to find traces of laser signals – which some scientists think could offer signs of advanced alien life – have turned up empty, dealing a blow to those hoping to find any interstellar neighbours in the near future.

In a new study, researchers looked at light coming from 5,600 stars in our own Milky Way – with 2,000 of those thought to host warm, Earth-like planets – but found nothing. Either alien civilisations aren't using powerful laser beams like we thought they might be, or those aliens just aren't there.

A team from the University of California Berkeley based their work on ideas proposed by fellow SETI (Search for Extraterrestrial Intelligence) scientists, namely: if advanced life exists out there, it might well be using 'directed energy' laser technology.

We're just beginning to explore this kind of tech ourselves, and experts including Stephen Hawking think looking deep into space for these kind of laser broadcasts could be one way of spotting where alien life exists.

Unless… maybe not, according to the new research.

"We found no such laser emission coming from the planetary region around any of the 5,600 stars," the team explains in their paper.

That's based on an analysis of historical starlight measurements made at the Keck telescope in Hawaii between 2004 and 2016, processed through a special algorithm designed to find evidence of unusual laser bursts.

The algorithm developed by the scientists was designed to cut out the background light emitted by each star to help find artificially created pulses that could be a sign of laser beams, but no traces were found beyond what you would expect from uninhabited systems.

But we can't rule out the existence of extraterrestrials just yet – the findings just mean that if they are out there, they don't seem to be using this type of laser technology across this cross-section of stars, most of which are within 100 parsecs (about 326 light-years) of our planet.

"These results put an upper bound on the number of civilisations transmitting lasers at us while we were observing," one of the team, Nathaniel Tellis, told George Dvorsky at Gizmodo.

In the image below, you can see one of the false positives turned up by the study, caused by heated gas around a star. 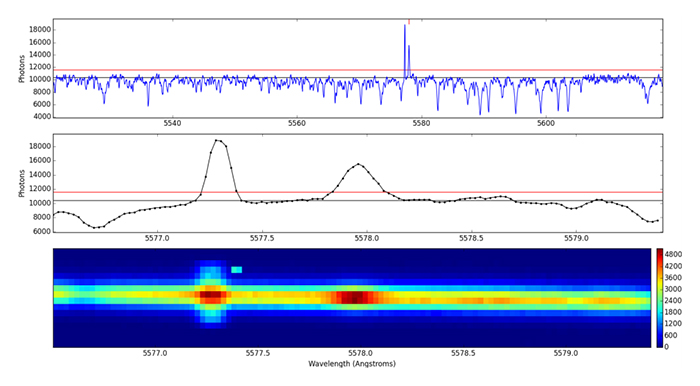 Maybe the aliens out there have gone way beyond this type of laser communication system, but it's relatively easy to spot signs of it from Earth, which is why scientists wanted to give it a try – unlike radio signals, laser signals don't degrade much through space.

All that said, Earth isn't beaming out any laser communications to distant worlds either. In other words, if the study had been conducted on Earth from 325 light-years away, no signs of life would've been spotted.

"Every single one of those stars could have a New York City, a Paris, a London, and we would have no idea," Tellis told Marina Koren at The Atlantic.

The study has been accepted for publication in an upcoming edition of The Astronomical Journal. Until then, you can read the preprint version at arXiv.org.