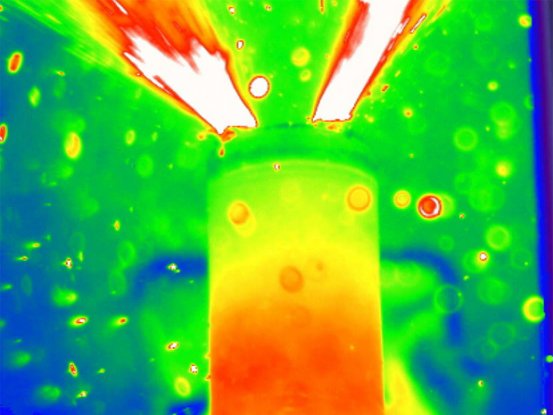 For the first time, scientists have gotten a detailed look at the internal structure of exploding lithium ion cell heated to extreme temperatures, in an effort to make these widely used batteries much safer.

Rechargeable lithium ion batteries power our smartphones and laptops, and are increasingly being used in electric cars and aircraft. While overheating is rare, it can occasionally cause batteries to explode or burst into flames. Some airlines have even stopped carrying shipments of these batteries, citing concerns about potential fire hazards.

To learn more about how this overheating phenomenon - known as thermal runaway - actually happens, chemical engineers at the University College London (UCL) in the UK decided to look inside a pair of batteries that had been heated to 250 degrees Celsius, which is well beyond their recommended thermal limit.

By learning why some batteries randomly explode and others don't, and how they react to extreme heat, the researchers hope they can improve the design and overall safety of these batteries. But getting a clear picture of what's happening can be tricky.

"Previous research has largely been limited to post mortem-type analysis of the charred remains of a failure," writes Jonathan Webb at the BBC.

To get around this, the UCL team took their batteries to the European Synchrotron Radiation Facility in Grenoble, France. This particle accelerator produces strong x-rays, which generate higher-resolution images than conventional x-ray machines. Coupled with a thermal camera, these x-rays allowed the team to see inside the external casings of the batteries.

Two commercially available lithium cells were placed on a revolving platform, which allowed the x-rays to build a 3D model as they were heated to 250 degrees Celsius with a heat gun.

Meanwhile, the researchers stood behind a lead door in a different room. They watched what was unfolding next-door via CCTV, and listened for the bang of an explosion.

The researchers were able to track the rapid degradation of the battery and observe how the thermal runaway process initiated and spread. At a certain point, reactions within the battery caused pockets of gas to form, which destroyed its internal components.

"This is where the thermal runaway is starting," chemical engineer and supervising researcher, Paul Shearing, told Webb at the BBC.

"There's a sort of trail of destruction through the battery. You can see the electrodes crumbling and falling to pieces, and when it gets to really high temperatures you see metal components melting within the battery."

The molten metal indicates that the temperatures inside the batteries were in excess of 1000 degrees Celsius, Shearing said.

The first battery remained intact structurally, largely thanks to a cylindrical support at its core, and released gas through vents. Pressure build-up in the second battery, however, caused the cap to explode off.

It also suffered more structural deformation, which researchers say leads to a heightened risk of severe internal short circuits and consequent thermal runaway. This highlights the importance of the cylindrical support, they say.

The researchers have reported their findings in the journal Nature Communications and expect them to guide the design of safer batteries.

You can watch the UCL video below.