For the first time, scientists have built a microbial fuel cell that produces an electrical current without any external power, which means it's now possible to use bacteria that poop electricity as an energy source.

The 3D fuel cell is made out of paper, and is only a a proof-of-concept at this stage. But it suggests that the batteries of the future could be powered by microbes instead of rare earth metals like lithium.

Microbial fuel cells use the activity of bacteria to effectively break down chemical energy (food) and poop out electrons. Those pooped out electrons can be turned into electrical power, which is pretty awesome.

But in order to ensure a continuous supply of food, scientists currently need to actively pump it to the microbes. If the food stops, the electrons stop too, so for years scientists have had to use external power to keep these microbial fuel cells running, and that kind of defeats the purpose of generating electricity in the first place.

Now a team from Iowa State University have created a 3D paper fuel cell that automatically keeps supplying food - in this case, potassium ferricyanide - to the microbes, without any pumping required.

Using their new set-up, the team showed that a microbial fuel cell could continue to generate an electrical current for five days, without any external power or human interference.

"All power created in this device is useable because no electricity is needed to run the fluids through the device," said lead researcher Nastaran Hashemi. "This is crucial in the advancement of these devices and the expansion of their applications."

Just like a battery, there are three parts - an anode, a cathode, and an electrolyte. Electrons enter the negatively charged cathode, are driven through the electrolyte towards the anode, and then leave to power something, before returning to the cathode again.

As long as electrolyte fuel is being supplied, the cell can continue to pump out electricity.

In this new microbial fuel cell, the electrolyte is a combination of a bacteria called Shewanella Oneidensis MR-1, and its 'food', potassium ferricyanide.

To make both of them flow towards each other, the researchers carved tiny channels into paper, which direct and encourage the movement of the solutions because they're so thin - similar to how capillaries in our body push forward blood.

As they meet, the bacteria digests the potassium ferricyanide and breaks it down into electrons.

You can see an image of the set-up below - the yellow petri dish is the S. Oneidensis, and the clear petri dish is the potassium ferricyanide. A proton exchange membrane (PEM) is in the middle, controlling the flow of electrons:

At the end of the five days, the team showed that a biofilm had grown on the carbon cloth surrounding the PEM - evidence that the activity of the bacteria was converting the potassium ferricyanide into electrons and growing healthily. 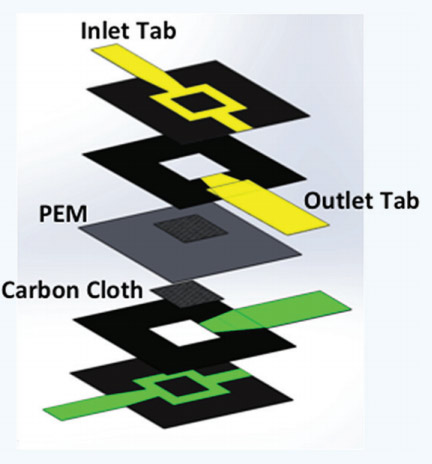 Over the course of the five days, the set-up was able to produce a maximum current of 52.25 microamperes and 1.3 microWatts of power from a 52.5 microlitre device.

In other words, this paper microbial fuel cell is capable of producing 25 Watts of power for each cubic metre of bacteria and food added.

That's not hugely efficient - it's certainly not enough to power anything energy intensive, like your iPhone or computer. But the researchers will use this proof-of-concept device to figure out how to further optimise the system by tweaking things like the rate of flow, and storage temperature.

They'll also have to work out how to shrink it down further and make the set-up more stable, so it can be considered for use in consumer products, such as batteries.

We've got a long way to go before this microbial fuel cells is optimised, but this is definitely a promising start.

The research has been published in TECHNOLOGY.