Scientists Built a New Kind of Invisibility Cloak, But It's Not For Your Eyes

The experimental setup with rings of microphones and speakers. (ETH Zurich/Astrid Robertsson)

Sound waves don't always hit our ears directly – they can also bounce off other objects and the walls of the space that we're in, which is why listening to a band play in a cavernous cathedral is a different experience to listening in a small music club.

Now scientists have developed a technique for 'cloaking' the impact that objects have on acoustic fields, so sound waves don't appear to hit or reflect back from them. In effect, these objects can be made invisible as far as acoustics are concerned.

It works using an outer ring of microphones (used as audio sensors) and an inner ring of loudspeakers (used as audio sources). By analyzing the sound waves picked up by the mics, a computer directs the speakers to instantly adjust the acoustic field so it behaves as if the object being concealed wasn't there. 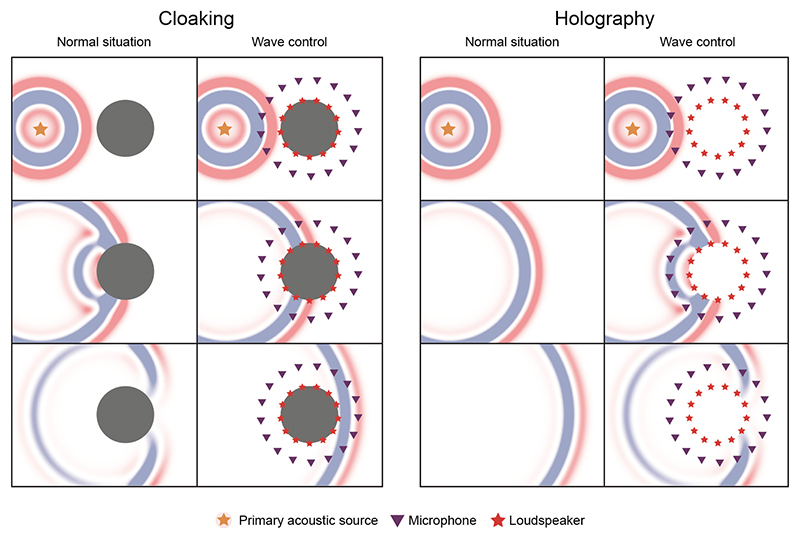 "This opens previously inaccessible research directions and facilitates practical applications including architectural acoustics, education, and stealth," the researchers explain in their paper.

The idea of hiding objects acoustically isn't itself new – it's also been tried with what are known as metamaterials, designed to absorb all the sound waves as they arrive at a surface. However, this is a passive, fairly inflexible approach that only works across a limited range of frequencies.

With this new real-time approach, there's a lot more versatility in making objects disappear – and it can even work the other way around as well, to make it sound as if a non-existent object is taking up space in the room (holography).

What are called field-programmable gate arrays (FPGAs) – integrated circuits that can be custom-coded – to ensure that the audio source outputs are able to respond to the audio speaker outputs with virtually no delay at all.

So far, the researchers have managed to get their system working for 2D objects up to 12 centimeters (4.7 inches) in size. With further study, the team expects to be able to scale up the techniques to work with 3D objects that can be much larger in size. What's more, it's already functioning across a wide frequency range.

"Our facility allows us to manipulate the acoustic field over a frequency range of more than three and a half octaves," says geophysicist Johan Robertsson from ETH Zurich in Switzerland.

The technology could potentially be put to good use in any field where sound waves are logged and analyzed – which covers a whole range of scientific applications, such as the study of underground structures.

Further down the line, the researchers are hoping to get a system like this working underwater too, where the acoustics are significantly different. Again, any kind of sound wave scanning process where existing objects need to be hidden or virtual objects need to be placed could benefit.

This new research is another demonstration of the incredible patience of many scientists too, with the initial groundwork for the acoustic cloak developed many years ago, as mathematical geoscientist Andrew Curtis from the University of Edinburgh in the UK explains.

"This collaboration started 15 years ago when the underlying theory was developed, which illustrates the long-term nature of scientific projects," Curtis says.