In what might constitute the year's strangest salvo against the scourge of "fake news", anthropologists have experimentally tested whether you can really make a knife out of frozen excrement. They conclude that you cannot.

Back in 1998, University of British Columbia anthropologist and popular writer Wade Davis recounted in his book Shadows in the Sun a tale told to him by an Inuit man named Olayuk Narqitarvik.

The story tells how an elderly man refused to move into a settlement back in the 1940s or '50s, planning instead to live alone on the ice.

In an attempt to prevent him from staying, the account goes, his family took away all his tools. "So in the midst of a winter gale, he stepped out of their igloo, defecated, and honed the feces into a frozen blade, which he sharpened with a spray of saliva," Davis writes. "With the knife he killed a dog. Using its rib cage as a sled and its hide to harness another dog, he disappeared into the darkness."

Whether the tale was meant to be apocryphal or not is unclear; Davis says he has always told the story with a sense of humor and considered it symbolic of how the Inuit thrive in their cold environment. But the idea of using feces as a tool isn't unprecedented.

Danish Arctic explorer Peter Freuchen, for example, wrote in an autobiographical account in 1953 that he once shaped his excrement into the form of a chisel, waited for it to freeze, and then used it to escape from a pit of ice and snow.

While it might have started as a funny story, Eren adds, he says he has seen many people using it as real evidence of Inuit ingenuity (for which there is plenty of other evidence, he adds; Inuit sled runners were made from fish, for example, notes Davis in an email).

That's potentially worrying, he says, especially in today's climate of "fake news". So he and his colleagues decided to test and see if a knife fashioned from frozen poop really could be used to kill a dog. 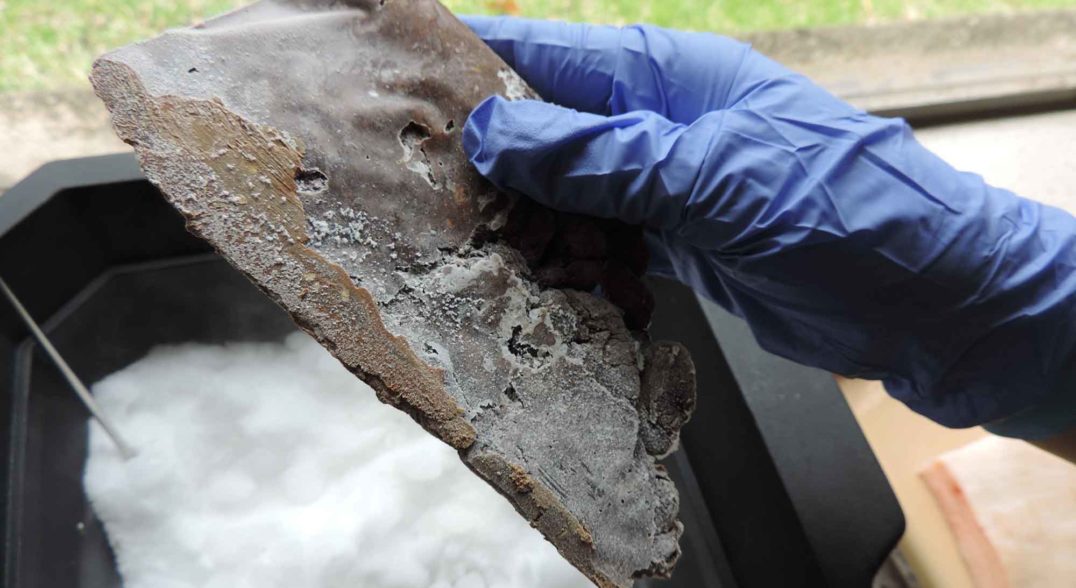 Eren's experimental archaeology lab is used to refashioning and testing traditional tools for their strength and abilities. And Eren is used to dedicating himself to his work: He almost lost a finger once, he recalls, knapping a stone tool.

In this case, Eren ate a high-protein diet, as the Inuit traditionally do, for eight days. (He ate a lot of salmon, beef, and turkey, though he cheated a few times by eating up his toddler's leftovers of macaroni cheese and applesauce.)

"The diet was way harder than I thought," Eren says. "The first day was awesome because I love steak. After the third day, I had headaches."

Starting on the fourth day, he collected the necessary "raw material", which he shaped into knives either by hand or with a ceramic mold, and then froze at -20 degrees Celsius.

Eren says he did everything possible to try to make the experiment succeed, including keeping the knife cold and sharpening it with a metal file, and trying to cut cool hide (rather than the warm hide you would get from a fresh kill). But the knife didn't cut; it melted, leaving streaks on the animal hide. "It was like a brown crayon," Eren says.

The notion of archaeologists working with feces isn't unheard of. Many archaeologists study coprolites—fossilized or preserved feces—to glean something about ancient animal or hominin diets, and even gut health.

Neanderthal coprolites, for example, have been used to determine if those hominins ate more meat or plants, and showed signs that Neanderthals had worm infections.

The results of Eren's study don't necessarily take away from the value of Narqitarvik's anecdote or Davis' retelling of it; such stories still say something about Inuit ways of transmitting cultural values and lessons.

"I wonder if from the storyteller's [Narqitarvik's] point of view, if they're so hung up on a distinction about literal truth," says Henry Huntington, an independent expert in Indigenous knowledge in the Arctic who is based in Eagle River, Alaska.

"It could be a lesson in resourcefulness, generally; the idea that you never run out of options."

"The entire point of the anecdote," wrote Davis in an email, "is to remind audiences and readers that the Inuit do not fear the cold; they take advantage of it. This is indisputably true."

"Traditional Inuit stories often used sexual and bodily references as humorous rather than purely educational details for their audiences," notes Brendan Griebel, an independent Arctic archaeologist based in Nunavut, Canada. "As in any culture, it makes for good storytelling."

Despite the humor of the story, Eren points out that some people — including The Arctic Institute — have retold and used the story as if it were fact. The use of untested claims to support even positive assumptions can be harmful, Eren notes, as it can snowball.

"The problem is, by using an unsupported story to support a stance, even if that's a good stance, it's a slippery slope," he says. "Then you can start having other unsupported claims that are racist or problematic."

Eren says he understands that many will find his paper funny (and the endless puns it invokes: "our data collection was regular," he jokes). "But the overarching message is really important," he adds.

This work first appeared on SAPIENS under a CC BY-ND 4.0 license. Read the original here.