Scientists Have Created Star Wars-Style Holograms in The Lab

Scientists have developed a nano-material device that they say creates the highest-quality holographic images ever produced – meaning Star Wars-style 3D apparitions are closer than ever to being a reality.

Unlike previous attempts at hologram technology, the researchers' system is made possible by a new nano-material that manipulates light with extreme fidelity. And because the device is so tiny, it means hologram technology could even be a feature in small personal gadgets, like smartphones.

Far from playing down the ties that holograms have to classic science fiction, the team behind the invention actually drew on their favourite films for inspiration.

"As a child, I learned about the concept of holographic imaging from the Star Wars movies," says lead researcher Lei Wang from the Australian National University.

"It's really cool to be working on an invention that uses the principles of holography depicted in those movies."

The flat images on our television and computer screens present information in only two dimensions – the difficulty when it comes to creating holograms, like the floating 3D Princess Leia in the image above, is due to the complexity of accurately manipulating light in three dimensions.

"If you compare [holograms] to conventional pictures or computer monitors … those produce only a portion of the information of light, basically just the intensity of light and in two dimensions only," one of the team, Sergey Kruk, explained to Ewan Gilbert at ABC News.

In contrast, the nano-material used in the researchers' new device lets them control light-based projections in three dimensions in infrared.

The nano-material is composed from millions of tiny silicon pillars, each up to 500 times thinner than a human hair. By manipulating this surface layer of nano-pillars – each of which acts kind of like a pixel projector on a conventional display – the system is capable of generating grayscale (monochromatic) 3D holograms.

"This new material is transparent, which means it loses minimal energy from the light, and it also does complex manipulations with light," Kruk says in a press release.

You can see an example of a hologram produced by the device below. In true Australian style, the researchers created a 3D kangaroo to show off what the technology can do: 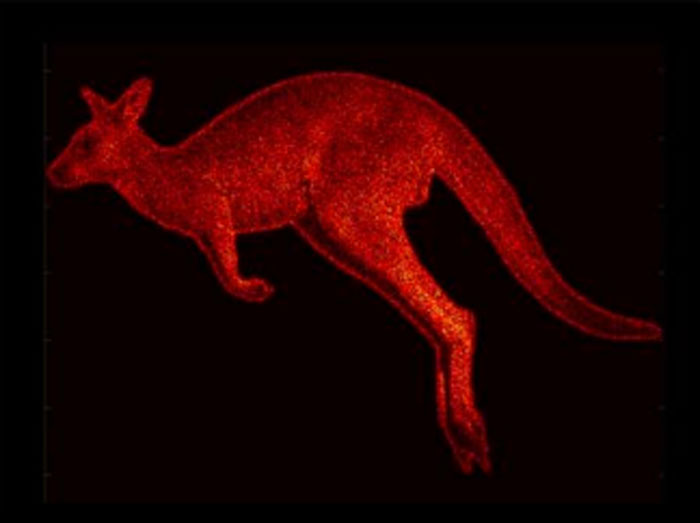 But if you're going to send an interstellar distress call to an old Jedi ally, you'd better be hoping they're prepared to squint very closely – because right now, the system is limited to producing very small holograms.

In testing with the new device, the researchers created holograms ranging in size from 0.75 mm to 5 mm in width – so these won't be replacing your wall-hugging flat-screen any time soon.

But the researchers say the output represents the highest-efficiency holograms created to date, and if the system can be refined, it could introduce a whole new range of hologram technologies.

"To make these components we use technologies that haven't changed for centuries. But with our new material we can create components with the same functionality but that would be essentially flat and lightweight."

It's still early days, but in the long run, this kind of technology could find a home in the gadgets we use every day – potentially enabling cameras that record light in three dimensions, as well as advancing optical systems used in scientific equipment.

"Our ability to structure materials at the nanoscale allows the device to achieve new optical properties that go beyond the properties of natural materials," said Kruk.

"The holograms that we made demonstrate the strong potential of this technology to be used in a range of applications."

You can find out more about the research in the video below.